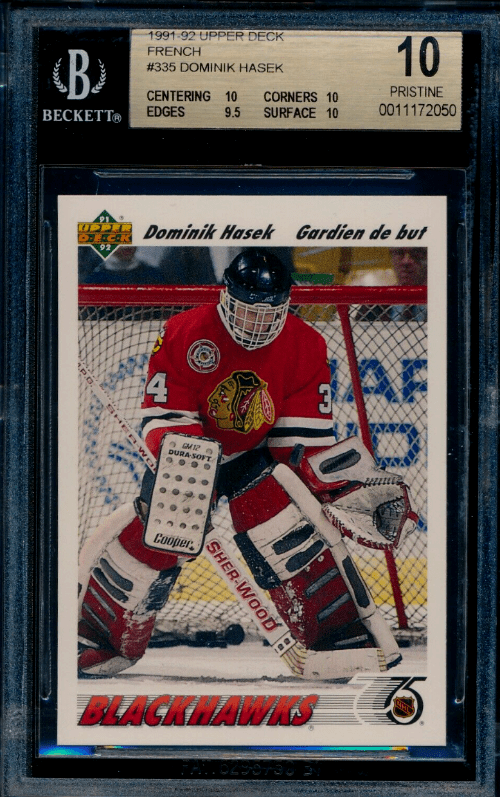 Legendary Czech goaltender Dominik Hasek (01/29/65) is widely seen as one of the greatest of all time.

Hasek turned out for the Chicago Blackhawks, Buffalo Sabres, Detroit Red Wings, and the Ottawa Senators in his 16-season National Hockey League career.

Here’s everything you could possibly need to know about the top three Dominik Hasek rookie cards, along with investment advice for the next few years.

There aren’t as many Hasek RCs as you might expect.

Of course, you’re spoiled for choice when it comes to later years, including parallels and signed options after he retired for the final time in 2012.

We’ve listed three of the best options below, starting with a popular RC that comes in a couple of different languages.

Hasek’s 1991 Upper Deck card is the first to make our list, and it’s widely seen as his key RC.

It features an action shot of the goaltender defending his net, making a save with his stick held out.

You’ll be able to tell by checking out his position on the front of the card, which is listed as “Gardien debut”.

On the US version, he’s listed as a goaltender.

In terms of values, there’s no real difference between the two, even when looking at cards that have achieved a high grade. 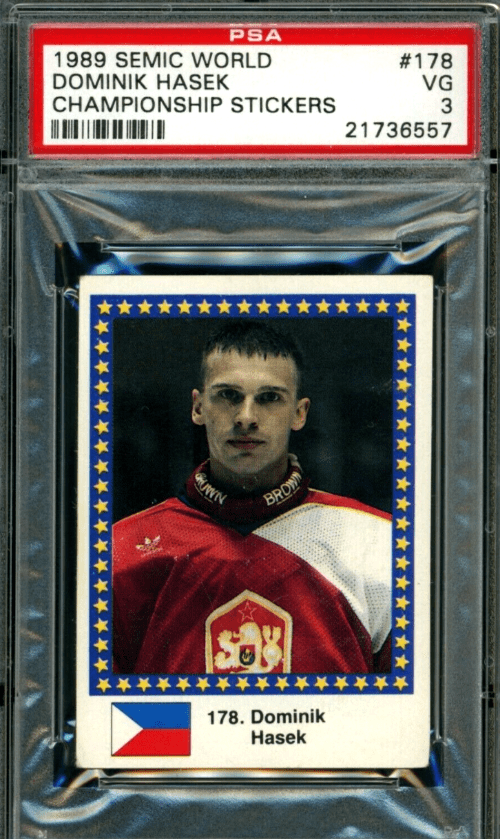 However, it’s still worth a fair amount at auction, even for low PSA grades.

It features a profile shot of a rookie Hasek, staring down at the camera with a serious expression on his face.

There’s an ‘EU-style’ border around the outside, with golden stars against a deep blue backdrop.

As an older option that manages to retain some value, it makes for one of the best investment pieces overall. 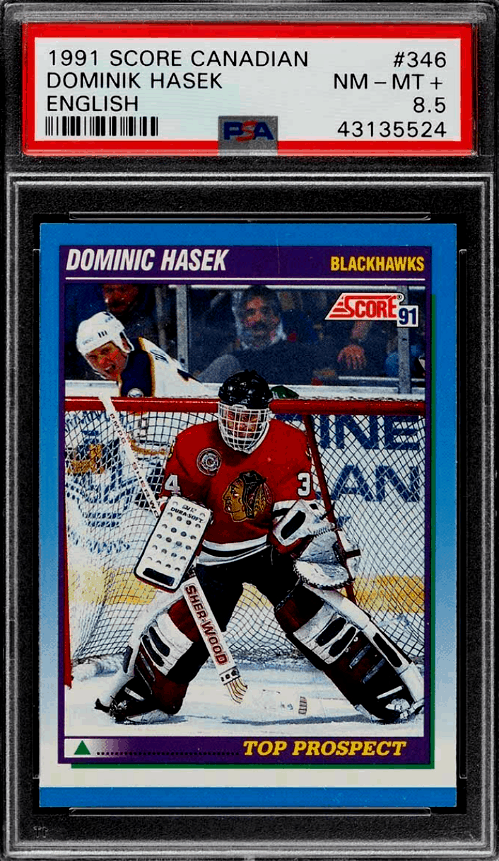 Returning to 1991, Hasek is back in his Blackhawks gear.

He strikes a similar pose to the action shot seen in the ‘91 UD card, in the process of making a save in the maverick style that he helped to popularise.

The blue border helps it to stand out further and leads to obvious flaws when looking for PSA 10 grades.

However, it hasn’t had an impact on the price or rarity in the modern-day, due to the number of cards produced in the average 1991 set. 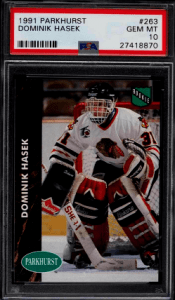 A mint-graded 1991 Dominik Hasek Parkhurst RC #263 can command as strong a price as any other Hasek RC.

1991 Parkhurst is a notable set for a few reasons. Pro Set, a company that took many years off before returning to action in 2021, leased the Parkhurst name for this 1991 set.

Parkhurst had last produced hockey cards in 1964 before Pro Set adopted its name for this re-debut set. This adds some depth to the story of the 1991 Dominik Hasek Parkhurst RC #263.

The card itself is far from flashy. It features Hasek in a white Blackhawks sweater crouched in full-defensive mode. A black vertical nameplate, green Parkhurst logo, and “Rookie” emblem complete the design.

This card’s value outkicks its modest design, though. It’s a Hasek RC within a set that had been dormant for decades. These facts make it a notable hockey card. 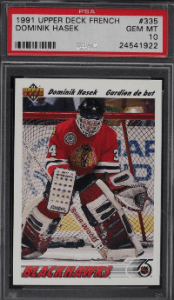 If you’re looking to purchase a Dominick Smith hockey card and need assistance please email us at advice@goldcardauctions.com. 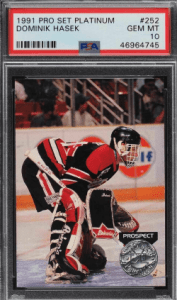 Hasek inspired the next generation of goaltenders and is rightly seen as one of the true GOATs.

He holds a number of all-time NHL records, including the highest career save percent (.922), and he acquired over 25 franchise records with the Buffalo Sabres, including most all-time games played, wins, shutouts, and lowest goals-against average.

However, his RCs were released during the height of the junk wax era, which saw insane numbers of cards produced for an ever-willing audience, who saw them as the perfect investment for the future.

The problem is, supply vastly exceeds demand today, and the same is likely to be true over the next decade or so.

For the ‘91 RCs, we’d recommend going with PSA 10 grades if you’re looking for the best investment options, while the sticker is worth a fair amount no matter the condition.

Hasek’s RCs don’t manage to match up to his legacy on the ice, even if he still has a large number of fans until this day.