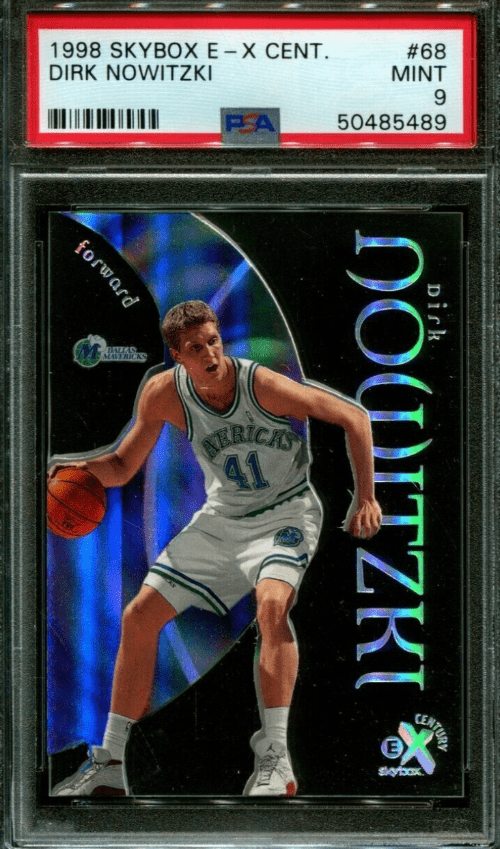 Born in Wuerzburg, West Germany, Dirk Nowitzki started his career in Germany with DJK Wurzburg before declaring himself for the 1998 NBA draft.

In the draft, he was selected as the 9th overall pick by the Milwaukee Bucks and immediately traded to the Dallas Mavericks, with who he would go on to spend his whole 2-decade long NBA career.

Nowitzki helped the Bucks to the 2011 NBA Championship with a Finals MVP performance, and also got named NBA MVP in 2007.

Nowitzki played in 14 All-Star games and is widely regarded as the greatest European player of all time.

His rookie season was not the ground-breaking season many predicted. He started just 24 games, and played only 47 in total, scoring just 8.2 points per game in the process.

Despite this, however, the incredible career the German experienced after this means that his rookie card values remain very strong. 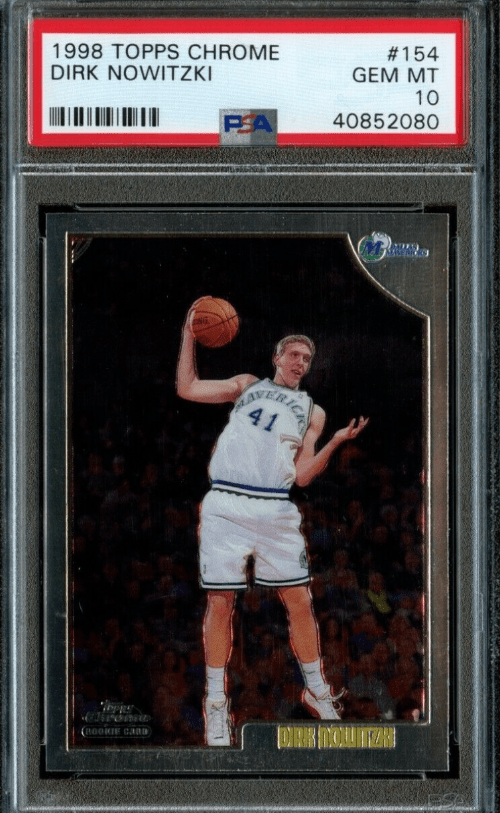 A staple of any rookie collection from this period, this 1998 Topps Chrome card features Nowitzki jumping with the ball in his hands in front of a full audience.

In typical Topps Chrome style, the border is colored with respect to the parallel that the particular copy is.

As usual, there is a whole host of parallels and inserts from Topps Chrome, ranging from common base cards to parallels with print runs of less than 50.

This means that anyone with any budget can get their hands on a version of this card.

This is an extremely unique card that features Nowitzki on the front, a silver streak, his name, and a little brand detailing all on a completely transparent background.

It is the uniqueness of this card rather than any particular brand name or rareness that makes it so highly sought after and valuable.

You Want This Kid In Your Collection: Top Luka Doncic Prizm Rookie Cards

The prices can run well into the hundreds of dollars and sometimes even more for cards in top condition. 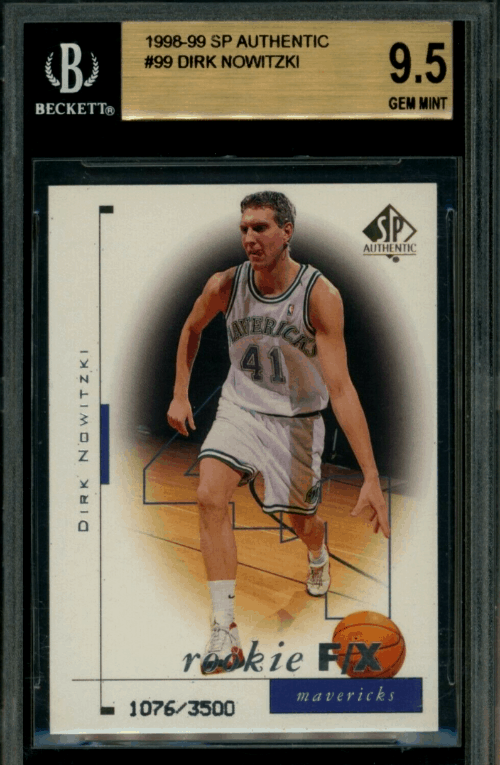 Another great-looking card from Nowitzki’s rookie year, this one featuring him dribbling on a court that is faded into a white background.

The card is serial numbered up to 3500 on the front, which actually makes it one of the rarer rookie cards available for Nowitzki.

This is reflected in the value which can run quite high, but still, with a relatively longer print run the cost remains reasonable.

There is also a very slightly rarer 2K9 insert to keep your eye out for that should sell for slightly more.

Nowitzki retired from basketball in 2019, having already secured his name in the history books with 2 decades of stellar performances.

Although this means there will be no more playoff runs or MVP performances to boost rookie card value, his retirement itself boosted the value significantly.

Nowitzki will have an almost guaranteed entry into the Basketball Hall of Fame as soon as he is eligible, and this should boost is rookie card values further as well as ensuring they always remain high.