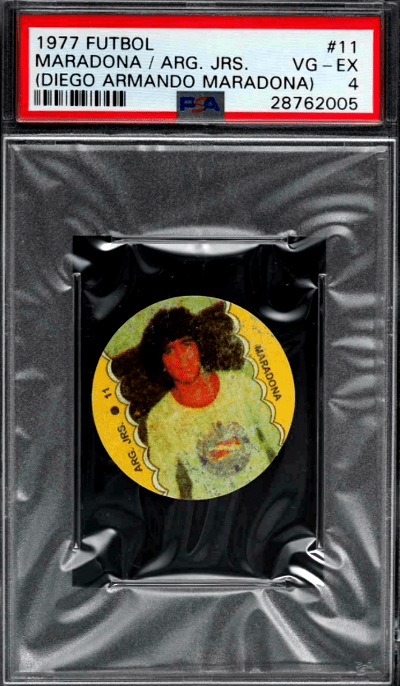 As legendary soccer stars go, Diego Maradona (1968-2020) was arguably only rivaled by the likes of Pele in terms of talent and worldwide acclaim.

He won the World Cup in 1986 and spent the majority of his career with Argentinos Juniors and Napoli.

Here’s a rundown with three of the best Diego Maradona rookie cards that money can buy, along with investment advice for the long-term.

Maradona’s earliest options were released in the late 1970s, so you’re not spoiled for choice if you’re looking for RC options.

However, there are three items of memorabilia from the era which do manage to stand out from the crowd. 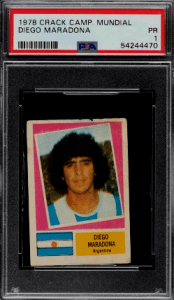 Despite missing out on a spot in the 1978 World Cup Finals squad, Maradona was included in the Figurita Crack Mundial sticker set from that year.

(He only just missed out as their chain-smoking coach Cesar Luis Menotti cited his lack of international experience, despite having already played two full seasons with Argentinos Juniors.)

Given that it’s an Argentinean version of a sticker released in the late 1970s, it’s exceptionally tough to find in the present day.

It shows the player in a profile shot that is skewed sideways, set against a bright pink background.

His name and an Argentina flag fill the space at the bottom. 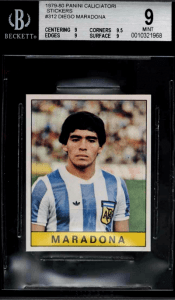 It’s another sticker, which has a simple profile image of the young superstar forward.

He opted for a serious expression for this photo, and he’s pictured in a vintage blue and white Argentina kit.

As an Italian release, it’s more plentiful than the sticker seen above and is often easier to find at higher grades.

Regardless, there’s only one gem mint version according to the PSA Registry, which sold for a fee of $555,960 in April 2021.

As you may have guessed, that’s a new record for a soccer card. 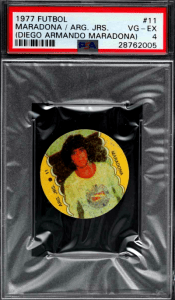 Lastly, his 1977 Futbol Discs collectible is seen as an RC, and will sell for exceptionally high prices if you manage to snag one of the few versions that are still in decent shape.

As the name implies, it comes in a circle rather than the traditional rectangle cards that we’re used to.

Maradona is pictured in an Argentinos Juniors kit on the front, while the reverse has been left blank.

“He was the youngest player in the history of the Argentine Primera División when he made his debut at the age of 15 in October 1976.”

This is the closest you’ll get in terms of early Maradona merch.

If you are looking to purchase a Diego Maradona soccer card and want help please email advice@goldcardauctions.com and we will be more than happy to chat. 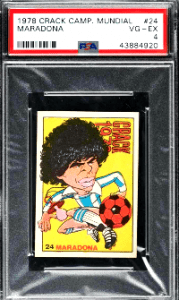 Before Lionel Messi, there was Maradona. A footballing wizard with unparalleled talent, but one who leaned towards the dark arts.

His battle with drug abuse was well-publicized, along with everything from links to organized crime, to narrowly avoiding a prison sentence in 1998.

Despite the difficulties he faced, Maradona is well remembered for his exploits, both on and off the pitch.

A pair of stickers and a ‘Futbol Disc’ might not seem like the greatest collection, but when a copy sells for half a million, it’s worth taking notice.

Given his tragic passing in 2020, the market was always going to readjust to the news.

Few expected prices to explode in the manner that they have, but it goes to show that Maradona’s legacy will continue to live on in the future.