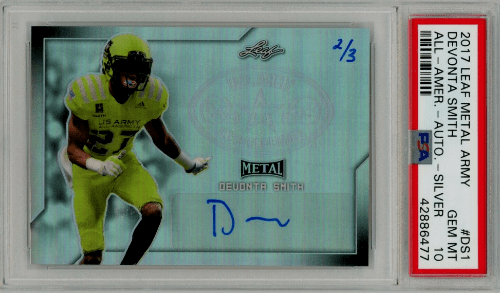 This kid is a winner on and off the field. Not only is he being compared to Jerry Rice in terms of skill set but he is also one heck of a good person.

Let’s take a look at DeVonta’s career totals why catching the pigskin at Alabama… 235 receptions, a massive 3965 total receiving yards, and a total of 47 touchdowns (46 receiving and 1 rushing).

He caught passes from the likes of Jalen Hurts and Tua Tagovailoa both of which are starting quarterbacks in the NFL (well the jury is still out on Jalen).

Obviously, collectors are foaming at the mouth the get their hands on some DeVonta rookie cards.

Good news and bad news. The good news is DeVonta Smith’s cards are already available. The bad news is we will have to wait a while for the high-end DeVonta cards. In the meantime let’s check out the super early DeVonta Smith RCs. 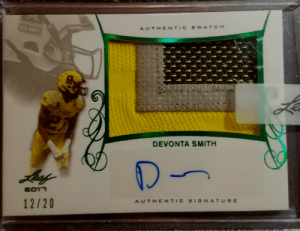 At the current time, DeVonta Smith’s rookie cards are not worth a ton as his high-end rookie cards have yet to be released (i.e Panini Absolute, Mosiac, and Prizm).

If you have one of these early DeVonta Smith cards and would like an estimated value on the card please email us at value@goldcardauctions.com.

Having said that there are some super rare DeVonta early RCs selling for a decent chunk of change. The most expensive sold to date is the 2017 Leaf Army All-American Ball Swatch Auto 1/1.

As we alluded to DeVonta is not only a stud on the field but a great guy to have in the locker room. Whatever NFL team lands this gem will have a future Pro-Bowl receiver and a superb character type guy (don’t need to worry about trouble with the law with DeVonta).

Scouts have said DeVonta isn’t the fastest or biggest but he gets in and out of route cuts like no other they have ever seen (including Jerry Rice according to some scouts).

This leaves us drolling to get our hand on the real DeVonta Smith rookie cards once they leave the printing press but were passing on these early releases.