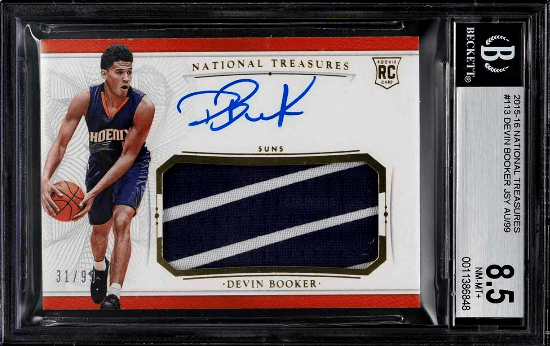 Devin Armani Booker (10/30/1996) was drafted 13th overall by the Phoenix Suns in the 2015 NBA Draft. He played one season for John Calipari at Kentucky before going pro.

“Book”, as he prefers to be called, is a score-first sharpshooter with a knack for getting his teammates involved in the action. Who else has a 70-point game to their name?

These characteristics make Booker a sound investment for card collectors.

Looking to invest in one of the NBA’s premier scorers? Consider these standout selections. 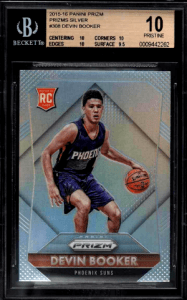 Devin Booker’s 2015 Panini Prizm RC is one of the standouts in this 400-card base set. Parallels are valued highly in the trading community.

The base card includes the standard Panini Prizm features with embossed, braille-style corners and a silver backdrop. If the style ain’t broke…

The 2015 Prizm features a diamond design behind the player image. Booker wears his all-purple “Phoenix” jersey, crouched with the ball palmed in his left hand. 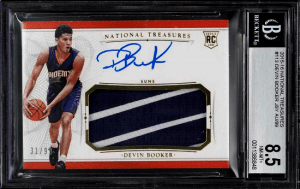 Once you start talking National Treasures, you know you’re talking real money. Throw Devin Booker in the mix and you’ve got one pricey card.

The visuals of this card live up to the price point. An octagonal border frames a patch of Booker’s Suns jersey. Above it, a blue “D Book” autograph slants in towards the upper-right corner.

An image of Booker graces the left side of the card. He shields the ball below his waist with both hands, sporting the purple Sun’s uniform while mapping his next move.

A silver #/99 insignia in the bottom-left corner affirms the card’s rarity, while the back of the card features a recap of Booker’s rookie year.

It’s clean and tasteful, True to form for A Panini National Treasure.

You’ll need to back up the Brinks truck if you want to add this D-Book RC to your portfolio. 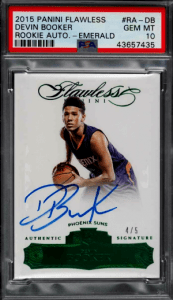 Another set known for its premium products, Panini Flawless hit it out of the park with the 2015 Devin Booker Auto RC. The composition and design are nothing shy of timeless.

The stark white backdrop enhances the pop of Booker’s image, as well as the large, gold Panini Flawless logo atop the card’s front side.

Booker looks alert in a three-point stance and his purple Sun’s uni. The top of his head overlays the Flawless logo while his lower half fades into the white background.

A prominent blue signature sits between the image of Booker and the nameplate below. The color of the nameplate varies from one parallel to another.

This is a premium card numbered (as all cards in the set are) with a premium look and a premium price point. The base auto is numbered to 25. 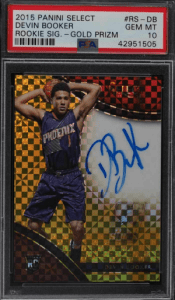 The premier Booker RCs are exclusive to those with lots of capital. Still, there are lesser cards at price points that light- and medium-weights will find palatable.

Considering the trajectory of Booker’s career and rookie card prices, don’t expect Booker cards to be accessibly priced for long. The arrow is pointed up.