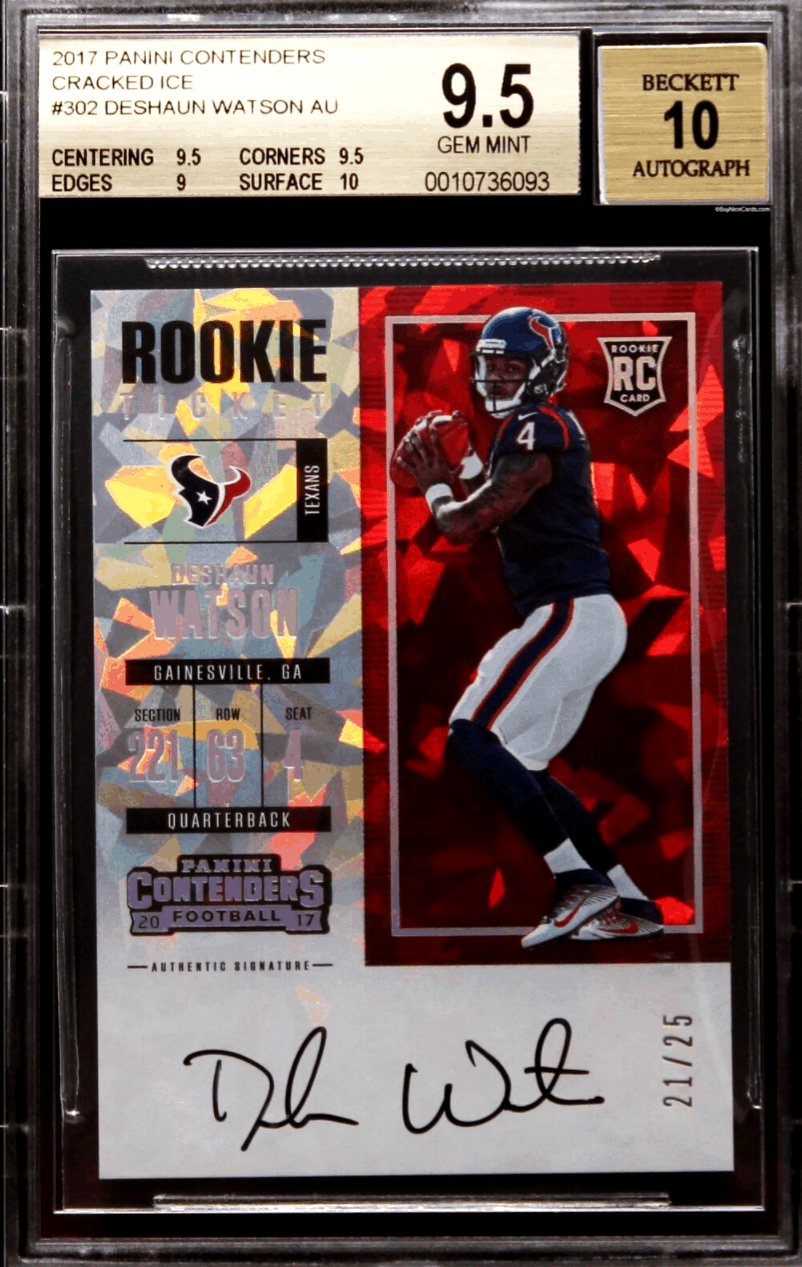 Houston Texans quarterback Deshaun Watson is the heart and soul of the franchise. Watson was born on September 14, 1995, in Gainesville, GA.

The Texans made him the 12th overall pick of the 2017 NFL Draft. Watson is an athletic signal-caller who has a rifle of an arm and a will to win every game… he is a true competitor and has a solid football mindset.

When the pocket collapses and there’s no open receiver, he can scramble for extra yardage. He is the Texans quarterback with the most number of rushing touchdowns (12). He should pad that stat significantly as the years go by.

Watson does need to work on his interceptions as they have increased every year he has been in the league.

But we still firmly believe Deshaun has what it takes to be a champion in the NFL. With Watson under center, Houston should contend for the AFC South title and make noise in the postseason for years to come.

For example, Watson singly handily defeated the Buffalo Bills in the first round of the 2019 NFL playoffs as he avoided a for a sure sack and turned it into completion and a first and goal vs what should have been a 3rd and 18 with the sack (watch this sick play below). That pass seemed to knock the wind out of the Bills and they never recovered. 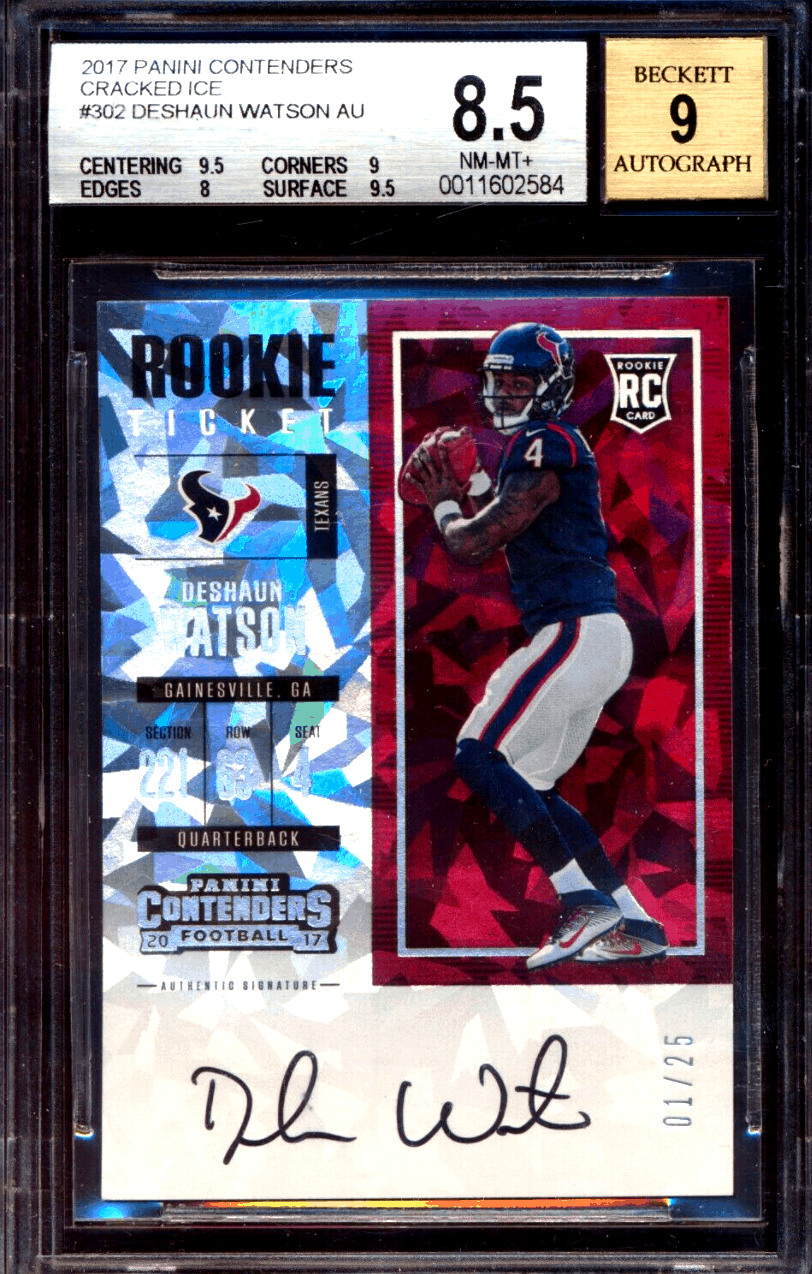 The 2017 Deshaun Watson Panini Contenders football card is a high-end card that will set you back a few thousand dollars but is a great investment (long and short term). The Cracked Ice version is our favorite parallel but the Super Bowl Ticket is a nice one to have as well.

Educational: When and Where to Sell Your Sports Cards 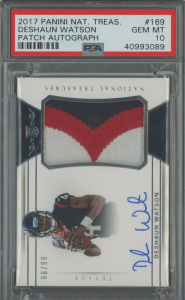 If we had to just own one Watson rookie card this would be it. Obviously, it is one of the more expensive (if not the most expensive) of all the Deshaun rookie cards but we also love the fact it comes with a game-used patch.

Numbered #169 the card shows Deshaun dropping back scanning the field for an open wideout. 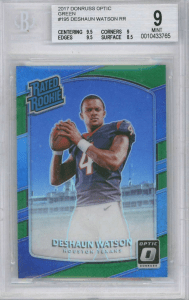 Here is a good card for the mid-level collector. The 2017 Deshaun Watson Donruss Optic rookie card won’t cost you an arm and a leg but won’t come cheap either. 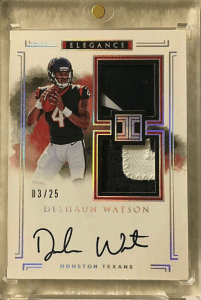 This Deshaun Watson rookie card has many of the intangibles: popular brand, a game-used patch, and an autograph.

The back of the card reads, “In the past five seasons, Houston has made the playoffs three times. As the Texans creep closer to a Super Bowl title, they found a winner in Watson to help get them there.

At Clemson, he led the Tigers to two national championship appearances, including a 35-31 victory in the title game on Jan. 9, 2017″… it’s a truly impressive addition to your sports card collection. 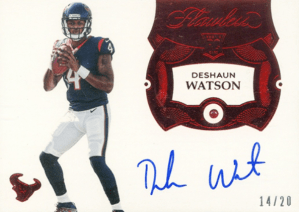 This card is another solid option under the Panini brand. 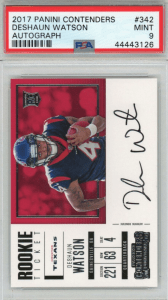 If you’re keen on some serious eye candy, Watson’s Panini Contenders rookie cards are worth some serious consideration.

You can’t miss the refractors highlighting Watson’s rookie card on the left panel and his photograph on the right. His autograph is at the bottom of the card. 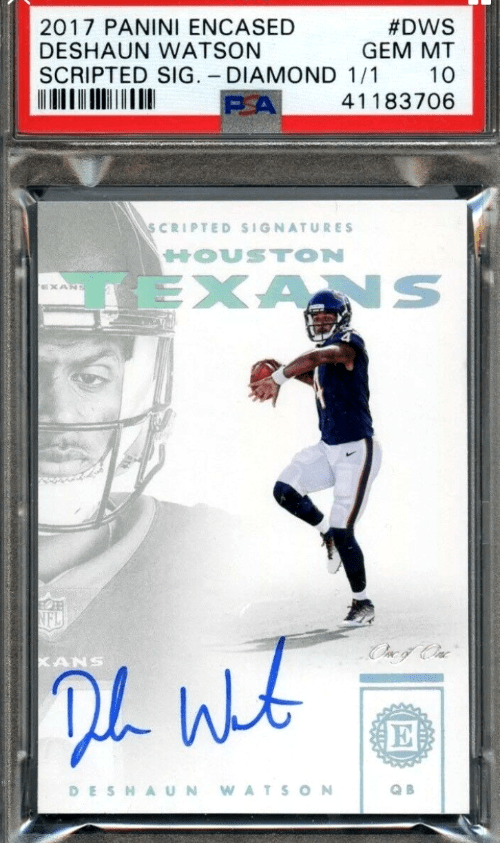 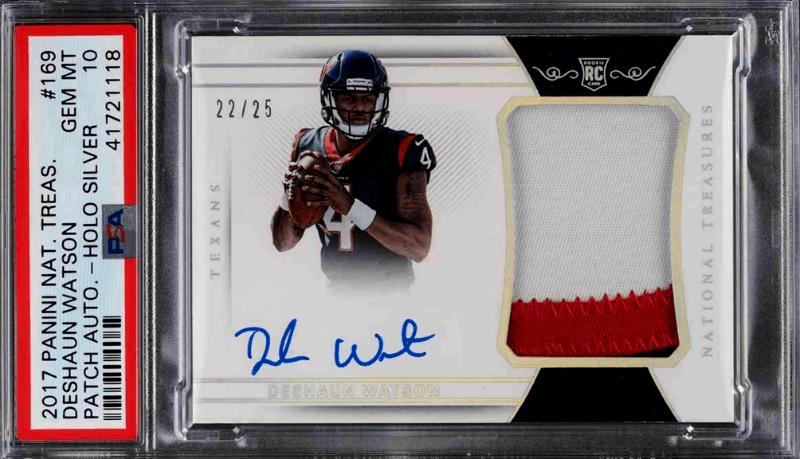 The most valuable Watson rookie card is his 2017 National Treasures RC RPA #169. This card is a beast and will cost more than a brand new Lexus (most models).

The exact value of any of his rookie cards is difficult to predict.

Please email us pictures (both front and back) to value@goldcardauctions.com and we will attempt to provide an estimate based on recent Deshaun Watson rookie card sales.

If you are debating with yourself in regards to which Watson card you want to purchase and need advice please email us at advice@goldcardauctions.com. 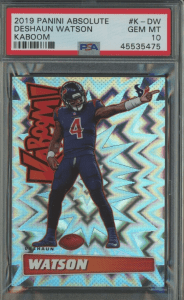 Here are some of the better Deshaun Watson cards that are not considered RCs’.

Clearly, Deshaun Watson is the face of the Houston Texans franchise.

Granted, Watson is not on the level of a Russell Wilson rookie card or Lamar Jackson RCs’ just yet, but if he shows consistency, he should get there.

UPDATE April 2021: Mr. Watson has been accused of sexual misconduct by several women in the Houston area.

Due to this we are changing our buy rating to pass (for now) and will pay close attention to what happens to Deshaun Watson both on and off the field.