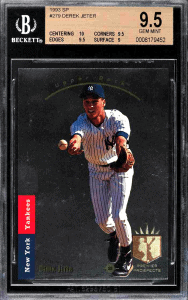 Derek Jeter was drafted by the New York Yankees 6th overall pick in the 1st round of the 1992 MBL Draft. The Captain, Mr. November, Captain Clutch – whatever you want to call Derek Jeter, he’s one of the most influential athletes of his generation and one of the best baseball players of all time.

With so much going for him on and off the field, he’s one of the most popular investments in sports trading cards.

But is the hype around him backed up by the facts?

The Perfect Pinnacle of Pinstripes

The first major factor that makes Derek Jeter a great investment is his association with the Yankees.

Being the face of one of the most valuable sports franchises on earth is great for boosting an athlete’s profile.

Jeter spent more than a decade as the Yankee’s team Captain and led the team to 5 World Series Championships in that span.

Sustained success in such a high profile position made Jeter a household name, even for people who know nothing else about baseball.

His team and city created a deep fan base for Jeter that will likely carry the value of his trading cards for many years to come. 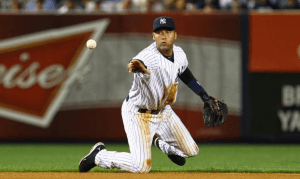 It’s important not to underestimate the value of Jeter’s cultural relevance to the price of his cards.

A huge part of any card investment strategy is understanding the potential demand for a card. The more people are familiar with an athlete, the larger the potential buyer pool for his cards.

To that end, Jeter’s roles in shows ranging from Seinfeld to Saturday Night live greatly expanded the audience for his cards.

Also, his current role as CEO and part-owner of the Miami Marlins makes sure that he stays relevant.

Going from the field to the front office is something most athletes dream about. The chance to lead a team from the very top is both thrilling and enticing.

But, few players in any sport ever get the chance. Rarer still, is the ability for a player to become an owner.

The fact that Derek Jeter has managed to do both in less than 5 years since retiring is a testament to his talent, intelligence, and permanent status as an aspirational figure for other athletes.

All of these factors will ensure that Jeter remains popular and in the public consciousness in the long- term.

His popularity, media profile, and continued relevance to baseball help raise the value of his rookie cards, but the foundation for that value is Derek Jeter’s legendary on-field talent. Here are some of his accomplishments:

Most rankers have him somewhere between 2 and 5 on the list of best shortstops in the history of the game.

That’s no surprise since he finished his amazing career ranked 6 th all-time in hits and number 10 in runs scored.

He also had 15 consecutive seasons with double-digit homers and stolen bases.

While many people know about his stellar career, it’s important to take specific note of Jeter’s playoff numbers.

With 158 playoff games on his resume, Derek Jeter has played a whole season past the month of September.

Playing that well, over that many games, against the best competition, under the highest pressure, guarantees Derek Jeter his place in history. 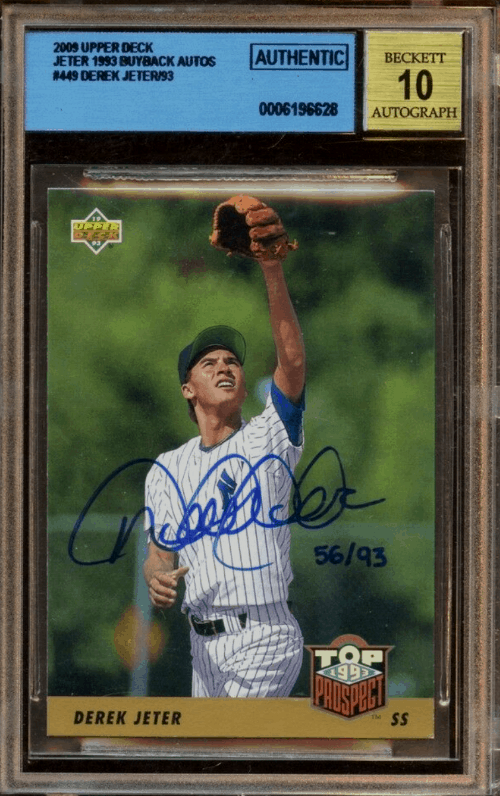 So, it’s clear that Derek Jeter has just about every advantage investors look for when deciding which players’ cards to invest in.

He’s an all-time great, from a top franchise, in the biggest media market, with huge and enduring cultural relevance.

All that alone makes his rookie cards a spectacular investment, but Jeter has even more to offer.

He’s eligible for the Baseball Hall of Fame in 2020 and has a serious chance to become only the second player ever to get in unanimously.

Everyone from Ty Cobb to Babe Ruth, from Willie Mays to Jackie Robinson, and from Hank Aaron to Ted Williams got into the Hall without 100% of the vote.

For most of Hall’s existence, it seemed impossible for anyone to be unanimous.

However, with Marino Rivera being the first to break that silent barrier, the pressure is on the voters to decide whether there’s a single reason Jeter shouldn’t join him.

So, Derek Jeter has the numbers, the history, and the future on his side.

It’s crystal clear that his rookie cards are a fantastic investment, but which ones should you target? 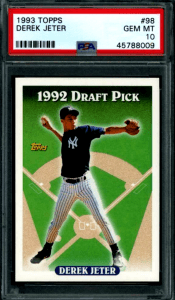 This must-have Jeter rookie card is an absolute gem from top to bottom. The simplicity recalls a different era of cards where substance ruled over flash.

The art, featuring a young, eager Derek Jeter makes this a perfect display piece for the serious, but a low key investor. It’s hard to believe how young Jeter looks here, but that’s part of the appeal.

This card is classic in all the right ways and will boost your collection both financially and aesthetically. 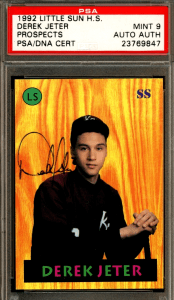 This card features a Derek Jeter so young, he looks more likely to hit your doorbell and run than to hit home runs, but it’s a stellar investment.

“With only 250 signed copies of this card, it’s quite rare, especially in top condition” 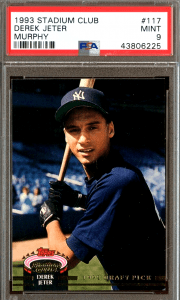 Derek’s Stadium Club card had a more limited release than many of the other Jeter rookie cards, so this one has improved in value exceptionally well.

With subtle gold bordering and lettering at the bottom, but no edge border, the card is both beautiful and difficult to find in great condition.

But, for those who do find a top-quality version, this card will be a solid investment for years to come. 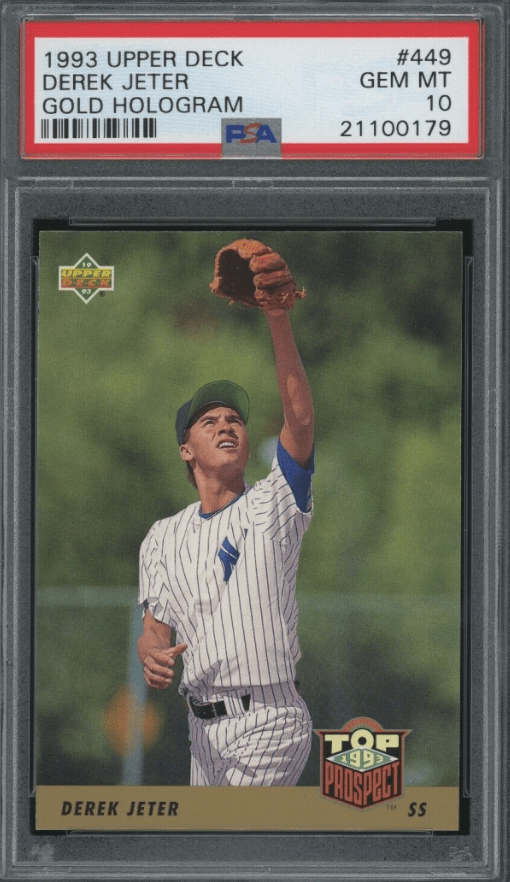 As the gold foil version of one of Derek Jeter’s most popular rookie cards, this is a staple investment for Jeter fans and savvy investors alike.

The art here is truly symbolic as a young Derek Jeter reaches up towards his bright future.

When this card was printed, no one had any clue they were looking at a rookie whose name would be in debates alongside Honus Wagner and Cal Ripken Jr.

This is the one. It’s one of the signature baseball cards of its entire generation and arguably, Derek Jeter’s best rookie card. 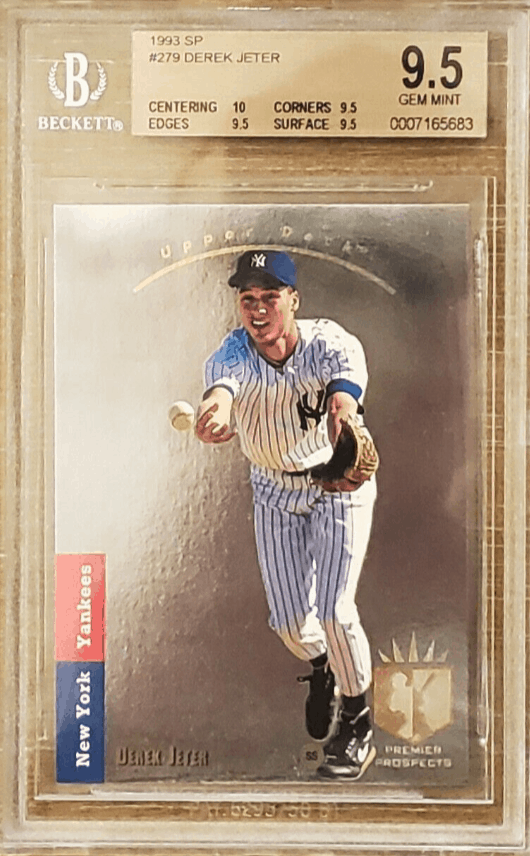 The art depicts Jeter hustling to make a play against a marvelous foil background.

As a top tier investment, this card has more than doubled in value over the past 5 years, with peaks at triple value.

If you need to have the best Derek Jeter cards on the market, this card has to be in your portfolio… and it should be worthwhile as it will check in with the top ROI at the end of the day.

Other Derek Jeter Rookie Cards Worth A Buy

Here are a couple Jeter rookie cards that barely missed making the top 5… don’t hesitate to buy these if you can’t find a decent price on the cards mentioned above. 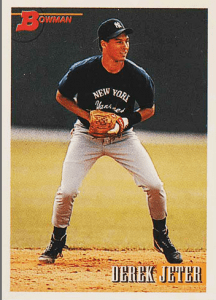 The 1993 Derek Jeter Bowman Rookie Card could have very easily been in our top 5 and is worth an investment at higher grades (i.e. PSA 10, BGS 9.5). 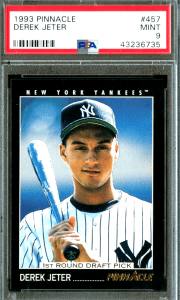 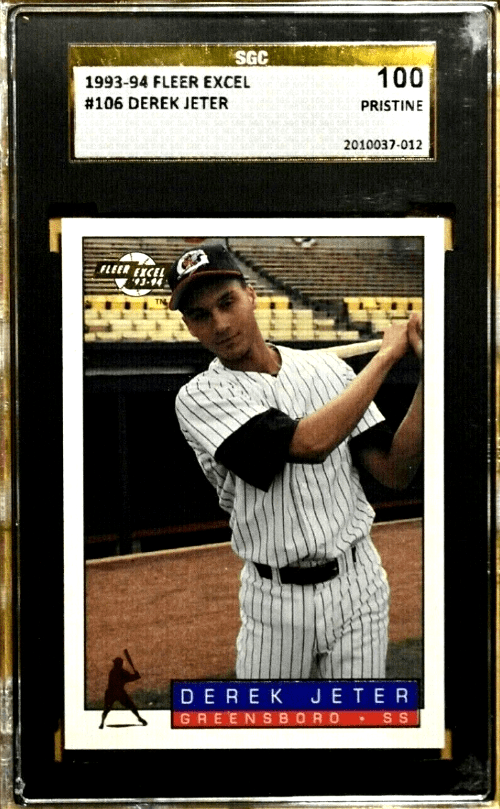 We expect Jeter rookie cards to do very well over the next 15 to 20 years from an ROI standpoint as he is one of the GOATS of Major League Baseball and a New York Yankees Icon which makes his rookie cards even more sought after.

It’s hard to predict the exact amount of money any single Jeter card will collect but please send us pictures of the card to value@goldcardauctions.com and we will provide an estimated value within 48 hours.

You can also DM us at the Gold Card Auctions Facebook page. If you are thinking about buying a few Jeter rookie cards but need advice (what card to buy based on your budget) please email us at advice@goldcardauctions.com.

Let’s take a look at which Jeter rookie cards are ideal for individual investors.

If your somewhere between high-end and budget you may want to consider the 1993 Upper Deck Gold Hologram rookie card… great-looking card, solid ROI, and not as expensive as the 1993 SP FOIL. 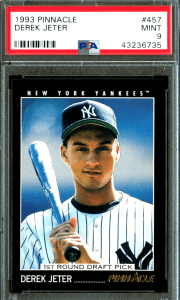 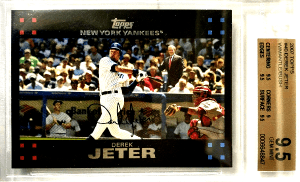 There is only one Derek Jeter error card worth buying in our professional opinion and its the 2007 Topps Derek Jeter Mickey Mantle & George W. Bush Variation Error Card #40.

This is a pretty cool error card that shows Jeter batting with President Bush in the stands and Mickey Mantle in the dugout haha… cool card… and the price is extremely reasonable, even at high grades.

Jeter is not only a New York Yankees Icon but he is also considered one of the GOATS of Major League Baseball.

READ
Ronald Acuna vs Juan Soto Rookie Cards: Who is the Better Investment?

Derek Jeter rookie cards (particularly the 1993 SP FOIL Rookie Card) will only increase greatly in value over time. The 1993 SP Jeter RC is one of the best LONG TERM investments in the card hobby.

Questions about this article or any other card related issue? Fill out the form below…