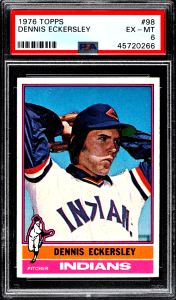 In recent times, “Eck” is also well-known for his broadcasting, helping him to stay relevant with the latest batch of MLB fans.

Here’s a rundown with Eckersley’s best rookie card options, including an investment outlook looking at the next few years.

We’ve checked out recent auction data to bring you a trio of the best Dennis Eckersley rookie cards that would make a good addition to your rookie card investment portfolio.

The 1976 Topps is Eckersley’s only official rookie card, featuring a large image of the pitcher in his Indians jersey. The background features a clear blue sky, making it an iconic piece of 70’s Americana that is well valued by collectors. Look out for issues with coloring, as it tends to be the main flaw with the set.

You’ll also be able to find an O-Pee-Chee version that is identical aside from some French text on the reverse. The O-Pee-Chee has the same number and sells for a similar price. 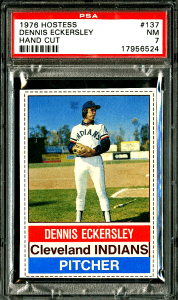 Perforated edges make it difficult to find mint copies of the 1976 Hostess, which features an image of the player ready to pitch with a few advertising hoardings in the background. It’s not as prestigious as the Topps edition listed above, although the issues with edging make it almost as expensive if you’re looking at high grades.

Eckersley’s Hostess card is clearly another decent investment option, as long as you can find a copy that doesn’t have too many imperfections. 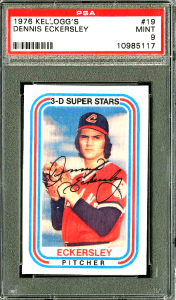 Eckersley’s Kellogg’s RC is part of a 57-card ‘3-D Super Stars’ set released by the cereal company back in 1976. As the name suggests, it has a basic 3D image of the player looking straight at the camera, with a red, white and blue striped border.

The addition of a plastic finish means that they’re easy to find in decent condition, as long as they haven’t cracked or chipped over the last 40 years. It’s also one of the few top rookies from the set, as Kellogg’s typically focused on established stars instead of hot prospects at the time.

The most expensive and sought after Eckersley rookie card is by far his 1976 Topps card grade PSA 10 or BGS 10 Pristine Black Label… whoa that would be a nice one to have!

A decorated player that still has ties to the modern game, Eck is a well respected Hall of Famer (2004) with a host of decent rookie options from 1976.

It’s no surprise considering he was a six-time All-Star in three separate decades, while he even made the MLB All-Time Team back in 1997. It’s hard to find a better pitcher in the history of the sport.

Given the era, these mid-70’s cards are difficult to find in mint condition, which means they’re cheaper if you’re just hoping to finish off your collection with any old copy. However, PSA 9s are valued highly, and gem mint copies will typically sell for thousands.

Of the three rookie cards we’ve listed, the Topps version is clearly the most likely to see a decent return on investment in the next couple of years.

It tends to get the most attention at auction, it’s part of a prestigious set, and it’s not overvalued compared to other famous cards from the ’70s. We’d advise looking for higher grades for the best possible ROI, especially given the issues sometimes found with coloring and centering.

Eckersley’s cards are worth keeping an eye out for, especially if you can snag a couple for a good price.