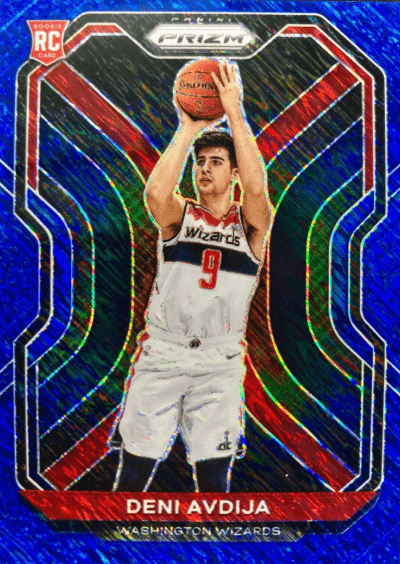 Deni Avdija is a highly-touted rookie who was the ninth overall pick in the 2020 NBA draft by the Washington Wizards.

The Israeli star recently suffered an ankle fracture which is likely to see him out for at least a couple of months, so now could be the best time to invest in his RCs.

Here’s a rundown with three of the best Deni Avdija rookie cards, as well as an investment outlook discussing the potential to make a profit from the very best options.

As a top ten draft pick, it’s no surprise to find that Avdija had hundreds of RC options to choose from.

“That’s without factoring in for the numerous parallels that up the rarity significantly.”

We’ve listed three of the best Avdija RCs, starting with a great card below. 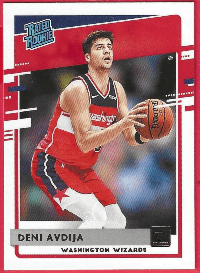 Avdija’s 2020-21 Rated Rookie is one of the more popular cards from the set, available in a range of colored parallels which are full-bleed.

It features an action shot of the player as he prepares to shoot, with a stickered autograph found at the bottom. 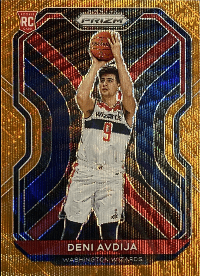 Don’t let the lack of an auto-stop you from checking out Avdija’s 2020-21 Prizm range.

As well as the customary unique border, the player also has an image variation with the same number.

He’s seen taking a shot in the base version, while he’s dribbling in the alternate option. 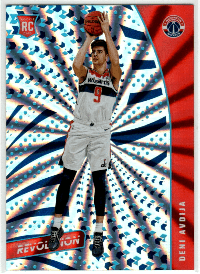 Finally, Panini Revolution has always had incredible designs, and the same is true for Avdija’s cards from the 2020-21 set.

It features a simple action shot of the player as he releases the ball, backed by a vivid foil background.

The full-bleed foil is red and silver, making for a card which highly conditions sensitive, but still affordable in the present.

The most valuable Deni Avdija rookie card is the 2020-2021 Panini Prizm Gold Shimmer Deni Avdija Rookie Card /10 #290, although more cards are on the way this year that will surely bump this one down a notch or three.

Email advice@goldcardauctions.com if you would like advice in regards to purchasing a Deni Avdija basketball card.

Email value@goldcardauctions.com if you would like an estimated value on a high-end rookie card. 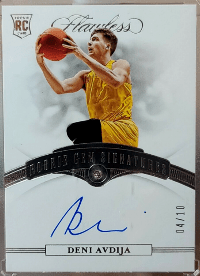 However, the recent injury will have an impact on Avdija’s rookie card prices in the short term, especially as his season is clearly over.

He left the game in a wheelchair, although he won’t need surgery, which is good news.

In any case, it’s worth keeping an eye on his rehab times, as prices are unlikely to get any cheaper for as long as he’s out of action.