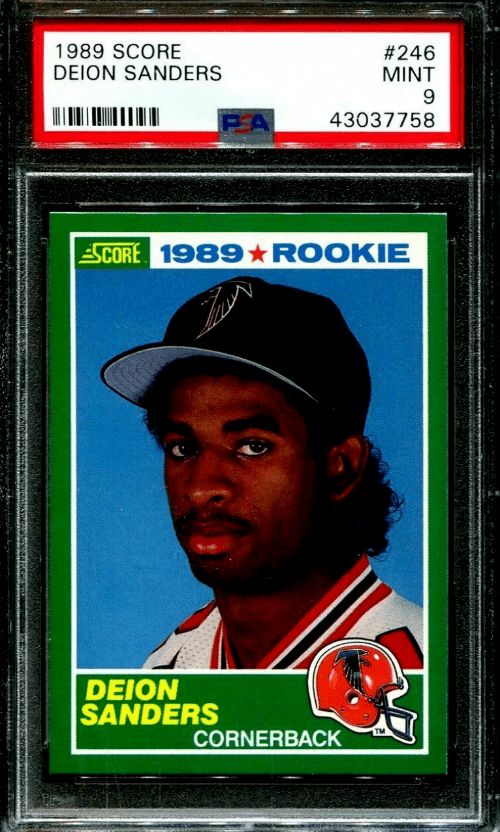 As well as playing professionally in two sports, he won two Super Bowl titles and made one World Series appearance in 1992 with the Braves. The only player to have done so, Sanders used his unique experiences to become an analyst in later years.

Here’s a rundown of three of his best options, along with investment advice for the future.

Sanders has rookie cards from his time with the Falcons and the Yankees, although they were all produced during the ‘junk wax era’. We’ve come up with three top options from both sports below. 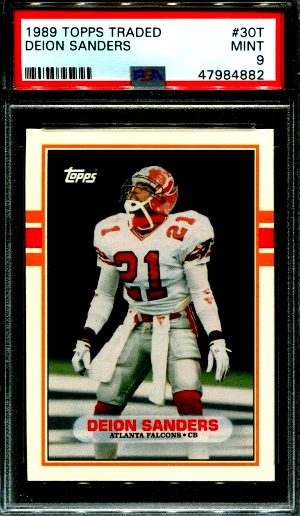 The first card to make it onto the list is his ‘89 Topps Traded. It has a great action shot, with Sanders decked out in full Falcons gear, staring up towards the sky as he waits for the ball to land. The border is orange and red, so it does look a bit like the 7/11 logo, but it’s still a solid RC, despite a lack of parallels.

Good Read: Most Expensive Football Cards from the 1990s

Topps Traded editions are an extension compared to the flagship release, although this was the first year the card maker offered a similar set for football fans. 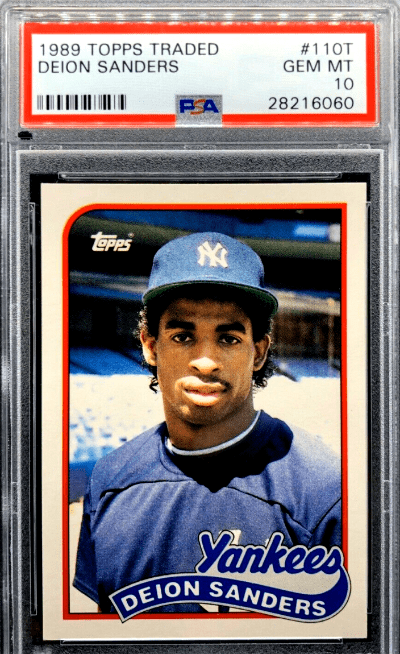 Numbered #110T, this card is also from a 1989 Topps Traded set, but this time it’s the baseball release which also features Ken Griffey Jr’s RC. In what is probably the best image you’ll find on one of his rookie cards, Sanders is pictured in a profile shot that really captures the late ‘80s look.

It has a thin red border, and the design is always popular with collectors. You should also be on the lookout for the Topps Traded Tiffany version, as the rarer parallel is produced on slightly better card stock, and the front is glossy. The differences are enough for the latter to be significantly more valuable.

Moving back to football, his 1989 Score was produced on high-quality card stock, while the green border is instantly recognizable. Sanders is pictured in a profile shot with a sky blue background. It’s noted to be a “1989 Rookie” at the top, and the team helmet design is another nice touch.

It was originally seen as the pick of his rookie cards in the early ‘90s, but that was before we discovered just how high print runs were for most sets from the era. It’s not scarce by any means, so it can be grabbed for next to nothing unless you’re looking at gem mint versions. 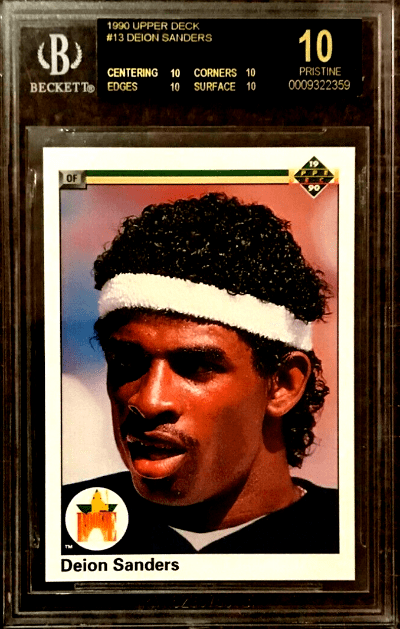 Sanders is a living legend who reached the summit in two different sports. As a two-time Super Bowl champion who made eight Pro Bowl appearances, his cards shouldn’t be slept on, but they’re not expensive by any means.

The average price of his rookie cards has improved slightly as the market slowly recovered from the fallout of the ‘junk wax era’, but they’re still shockingly low considering what he achieved over the years.

Even PSA 10 grades are hardly worth three figures, and Sanders’ cards are an apparent casualty of the large print runs seen in ‘89. However, they’re still highly collectible, especially for anyone who watched “Prime Time” do his thing.

For the best investment pieces, it’s probably better to look to more current releases, such as any signed card with a lower print run. Sanders has continued to sign cards and merch in the years following his retirement, so you’re spoiled for choice in this regard.

If you’re determined to stick with RCs, you can still make money, but we’d look to gem mint copies exclusively, as they tend to be the only versions worth anything at auction.

His cards are a risk-free investment piece, but they probably won’t be worth much more in the future unless you’re willing to hold onto them for decades.