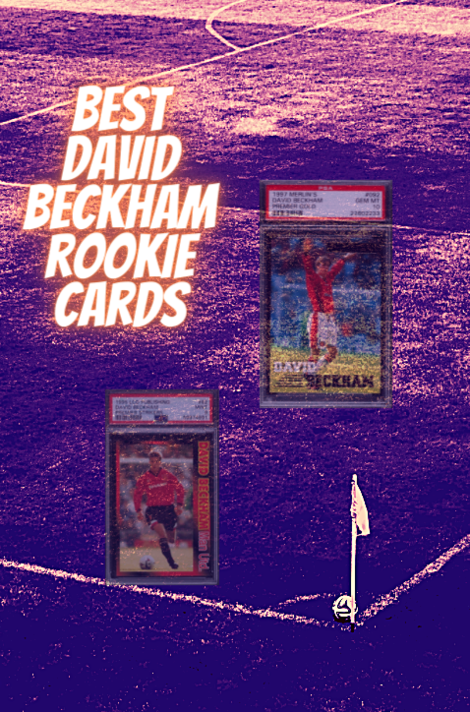 David Beckham might be better known for being a celebrity in recent years, but he was one of the greatest midfielders of his generation during the mid-2000s.

A dead-ball specialist and a tireless worker, he played for Manchester United, Real Madrid, LA Galaxy, and PSG, winning at least one league title for every club he signed with along the way.

The former England captain is now a part-owner of Inter Miami, while he’s a UNICEF ambassador and a true global icon.

We’ve come up with a list containing five of the best David Beckham rookie cards, as well as an investment outlook for the future.

After a brief loan spell at Preston North End, Beckham made his Premier League debut for Manchester United in 1995.

We begin with a bit of a mystery. According to various grading services, the 1995 Raven is a Beckham RC released way back in ‘95 when he was about to make his debut for the first XI.

In and of itself, it’s a great card to look at, with two images of Beckham and a flame effect added to the Red Devils logo on the side.

It’s also supposedly numbered to 500, although it lacks a serial number to place it within the set.

Here’s where it gets interesting.

Alan Jenkins is an expert soccer card collector from the UK, who is *sure that “Raven cards were issued in [the] 2000-01 season” as he “bought a set that included the extra-large centerpiece card” and added it to his personal database at the time.

He’s not the only one to do so, so I’d be wary, despite PSA 10 versions selling for thousands of dollars, and attracting numerous bids at auction.

A card that does appear to have been released in the mid-1990s, the LCD Publishing Premier Strikers David Beckham RC is similar to the Raven in terms of design.

It sticks with a black and red background to suit the vintage Man Utd kit, with an image of Beckham dribbling downfield.

His name is also listed on the side horizontally, although it lacks the flame effect seen above.

There’s no manufacturer logo on the front or the reverse, making for one of the cleaner cards on the list.

The earliest Beckham rookie sticker was produced by Merlin Publishing in 1996, a year after the company Topps acquired the company.

It was the third Merlin PL sticker album, while each team had six pages in a massive 130-page collection.

They also had an insanely popular promotion with McDonald’s, where six stickers entitled you to a free Coke or fries if you saved the peeled reverse.

For those who resisted the urge, unpeeled versions are arguably one of the better early Beckham investment pieces.

There’s a simple close-up profile shot of the player on the front, with a small name tag at the bottom.

Beckham had already started his ascent to stardom by 1997 and was included in the Upper Deck England set of that year as a 21-year-old.

It celebrated England’s Qualifying Campaign for the ‘98 World Cup, and he’s found in a subset called ‘The Squad’.

UD clearly knows what they’re doing in terms of card design, with a large action shot of Beckham on the field backed by a red and blue tab to match his international team colors.

Some collectors prefer the older Manchester United cards, but few can match up to this in terms of purely aesthetic appeal.

It’s also the first to show the player in an England shirt, which is notable as international RCs are always popular with soccer card collectors.

Last but by no means least, the 1997 Merlin’s Premier Gold David Beckham RC is seen as the best that money can buy.

You only need to take a brief look to understand why, as it drips in premium quality.

The image of Beckham celebrating was captured after he smashed in a famous goal from the halfway line in 1996, while the logo and his surname are wrapped in gold chrome.

There are only 20 PSA 10 copies according to the registry. This makes it one of the rarest soccer cards to feature the icon, and pristine versions will easily sell for five figures at auction.

Beckham is one of the best-known athletes in the world, even if he last kicked a ball professionally in 2013.

Unlike many other footballers, he successfully broke the US market and helped to revive the MLS during a lean period. He’s just as popular in Europe and South America, and that’s without mentioning his impact on Asia.

The point is; Beckham fans are everywhere, and his RCs are somewhat underpriced considering his exploits on and off the pitch.

Given current trends, it wouldn’t be surprising to see values continue to rise steadily over the next decade.

However, we’d still be wary of the 1995 Raven card, even if it comes wrapped in a PSA sleeve. There are supposedly only 500 copies, but the lack of a serial number means that it would be easy to forget.

There are other Beckham cards that would serve well as investment pieces, including a couple of 1995-96 options that failed to make the list.

The Pro Match card is in a caricature style, while he also had an RC released by Subbeteo.

Of the many collectibles I’ve written about, the Beckham rookies are up there with the very best, especially in terms of potential ROI over the next decade or so.