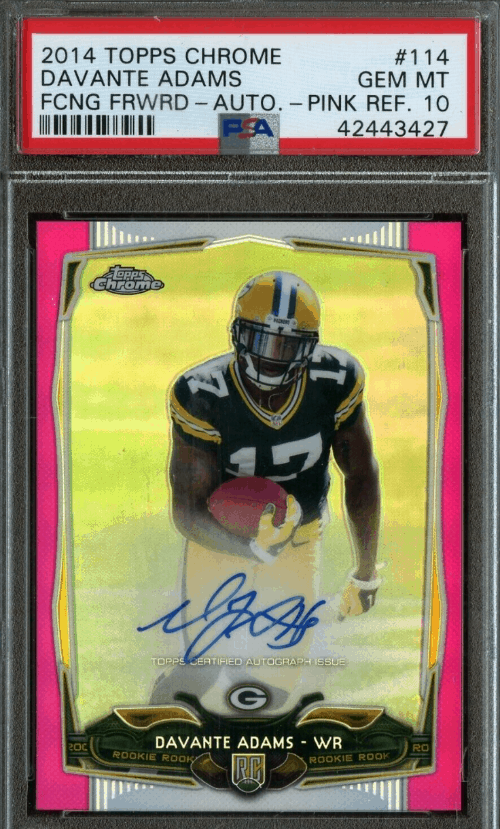 Davante Adams (12/24/92) is a wide receiver who has played for the Green Bay Packers since being drafted as a second-round pick in 2014.

Since 2016, Adams ranks fifth in the NFL in receptions, sixth in receiving yards, and first in receiving touchdowns. He has a solid claim to being the best WR statistically as of 2020, while he made three Pro Bowl appearances from 2017 to 2019.

Here’s a rundown with three top Davante Adams rookie cards, including investment advice if you’re looking at this list solely for investment purposes.

Adams’ rookie cards were released back in 2014, so there’s a wide range of options to suit almost every budget.

We’ve listed three of the best RCs below, starting with his ‘14 Topps Chrome.

The 2014 Topps Chrome release is a strong Adams RC, with a base edition that features a wide action shot of the player as he moves a football along rapidly. It’s a decent image, although you can’t really see his face because it’s obscured by his helmet.

As a Chrome Refractor, it comes with a shiny finish, and there are a number of additional colored parallels to be on the lookout for. These change the color of the border on the left and right sides, and you’ll also find an on-card auto at the bottom.

Both the signed and unsigned versions have an image variation, which shows Adams side-on, instead of straight on. They all share the same card number (#114). We’d stick with the base version if you’re solely interested in investment pieces, paired with a serial numbered parallel if possible.

Check out the Gold Card Auctions Buyers Club and make $$$ 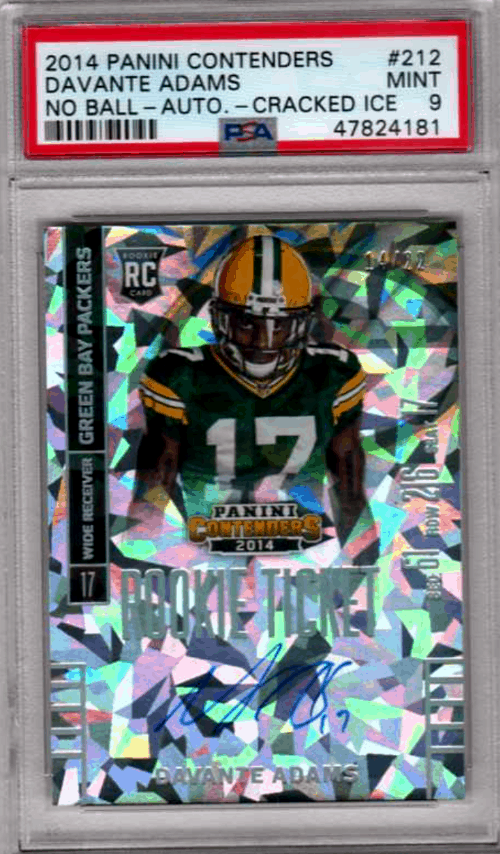 Ever popular, Adams’ Panini Contenders RC is next up. Collectors will be familiar with the Rookie Ticket design, even if it does look a bit dated compared to modern releases. It has a white background, with a Packers logo located under the player image.

The card is given a silver chrome finish, which works well with the on-card auto which is found at the base. There are three image variations, which are as follows;

As always, we’d look to the Cracked Ice parallel as the best investment piece overall, thanks to a solid design and just 22 copies available. 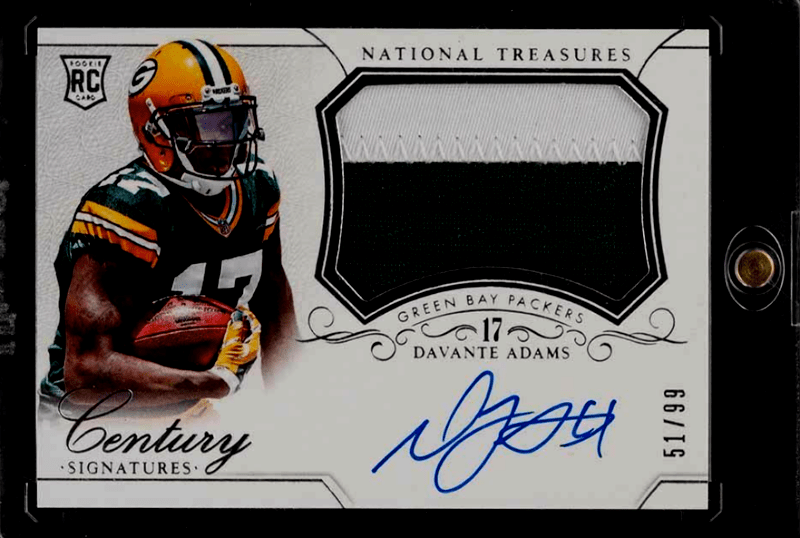 The final card to feature is Adams’ ‘14 National Treasures. The base card has a print run of 99, while there’s a variety of rare parallels that also come with low print numbers.

Design-wise, it’s fairly typical compared to other NT cards. It has a landscape design, with a close-up image of Adams found on the left. The right is devoted to both an on-card auto, as well as a large player patch, completing the premium feel.

You’ll find the serial number next to the signature in the bottom left corner. Of the trio to make the list, it’s the best-looking card for me personally, but that is subjective. 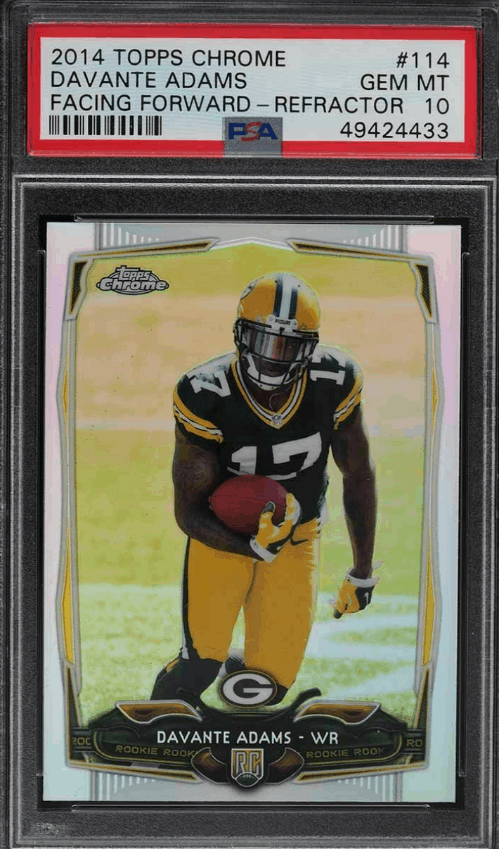 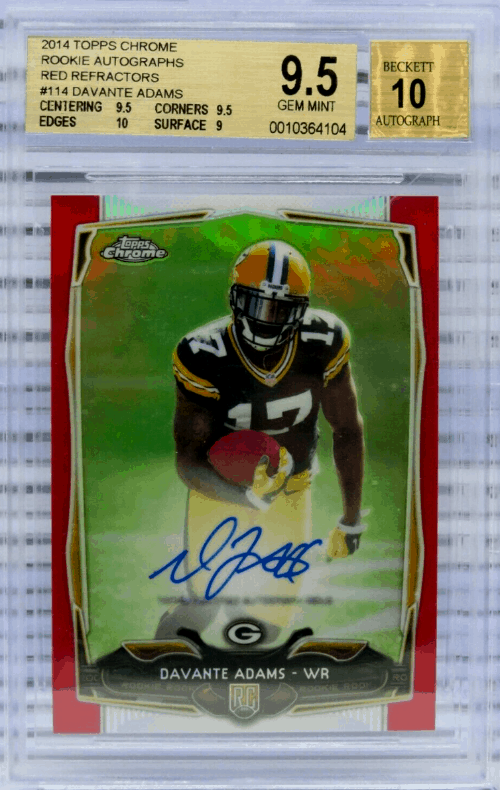 The most expensive Davante Adams rookie cards are his National Treasures Turn of the Century, Topps Chrome Refractor, and the Panini Contenders Cracked Ice.

If you are looking to buy a Davnate Adams rookie card and would like advice please email us at advice@goldcardauctions.com

Midway through the 2020 season, Adams is statistically the best WR in the league by a number of metrics.

Those are some impressive stats, and it’s a clear progression from past seasons.

The numbers alone will only tell one side of the story, but Adams easily passes the eye test when you see him in action for the Packers. It makes sense considering that he’s entering his prime, and still has his best years ahead of him.

“We mentioned his consistency in the intro, making him a solid fantasy pick, and a godd RC investment option”

Adams looks to be a strong choice if you’re on the lookout for rookie cards that can be used as a mid-to-long-term investment piece. At his current rate, he’s bound to feature in at least a few more Pro Bowls and looks to be a lock-in for a spot in the Pro Football Hall of Fame.

His RCs haven’t set the world alight in terms of pure values, but they have been receiving a lot of attention at auction recently. Any of the options that we’ve listed above will make for good investment pieces, while we’d opt for the NT card if your budget allows.

There are lots of affordable options, while parallels also offer more valuable versions to chase.