Pettis has produced a number of highlight plays during his rookie year, battling back from injury to finish 2018 strongly.

Here’s a list with a trio of his best rookie cards, as well as an investment report for next season.

The National Treasures card comes with both a rookie patch and a signature on the front.

The design is red and white, with an image of the player on the right-hand side.

The back has a short paragraph discussing his father’s sporting ability, as Gary Pettis was an accomplished baseball outfielder.

A mint version will sell for over $120, but it’s a solid purchase if Pettis Jr gets a good run of games in his second season.

San Francisco 49ers Pettis’ normal rookie ticket card can be picked up for under $30, and that’s a good price for a distinctive version that also comes with an autograph at the bottom.

The red and white card shows the player mid-stride, while the back lists a few personal interests and his ability to play in numerous attacking positions.

Special editions will increase the price markedly, and he also has a playoff ticket card which goes for just under $100.

This is a landscape card that features Pettis in his 49ers jersey. Another red and white card, the front has a ‘premium’ patch on the right, along with an RC logo and an autograph.

The reverse has a short paragraph which details some of his impressive college stats. A decent copy can be picked up for under $20, so you won’t have to break the bank to add an autographed patch to your collection.

Investment Outlook on All Dante Pettis Rookie Cards His position has recently been opened up for competition by the 49ers, but Pettis is likely to be their undisputed wide receiver in the future.

A few injuries haven’t helped his progress, but he’s worked to add extra muscle which should help both his pace and his injury record.

Pettis’ rookie cards are affordable, so there’s no real downside if you’re thinking about picking up a couple to invest in.

Autographed patches are always wanted by collectors, and they could jump up in price if he nails down the position and takes the team to the playoffs. 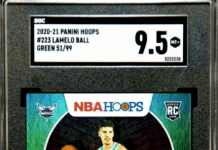 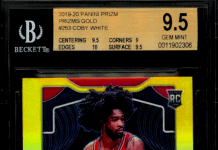 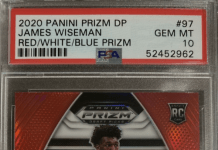