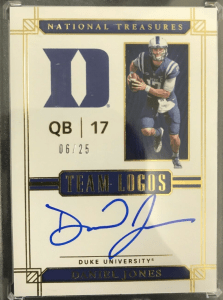 Known as “Danny Dimes”, Jones is the Giants starting QB and played college football for Duke.

Jones was the sixth selection in the 2019 NFL Draft and overcame adversity after the choice was criticized heavily at the time.

After a slight dip, his rookie cards have begun to creep up in price, and they’re likely to continue to do so if he can keep up his form in 2020.

We’ve listed a trio of the best Jones rookie cards to look out for, along with a brief investment outlook for the future.

The Prizm draft is an affordable option that features Jones ready to throw a football, with a small RC logo located on the top right-hand corner.

We especially like the looks of the “purple” Prizm card shown below. 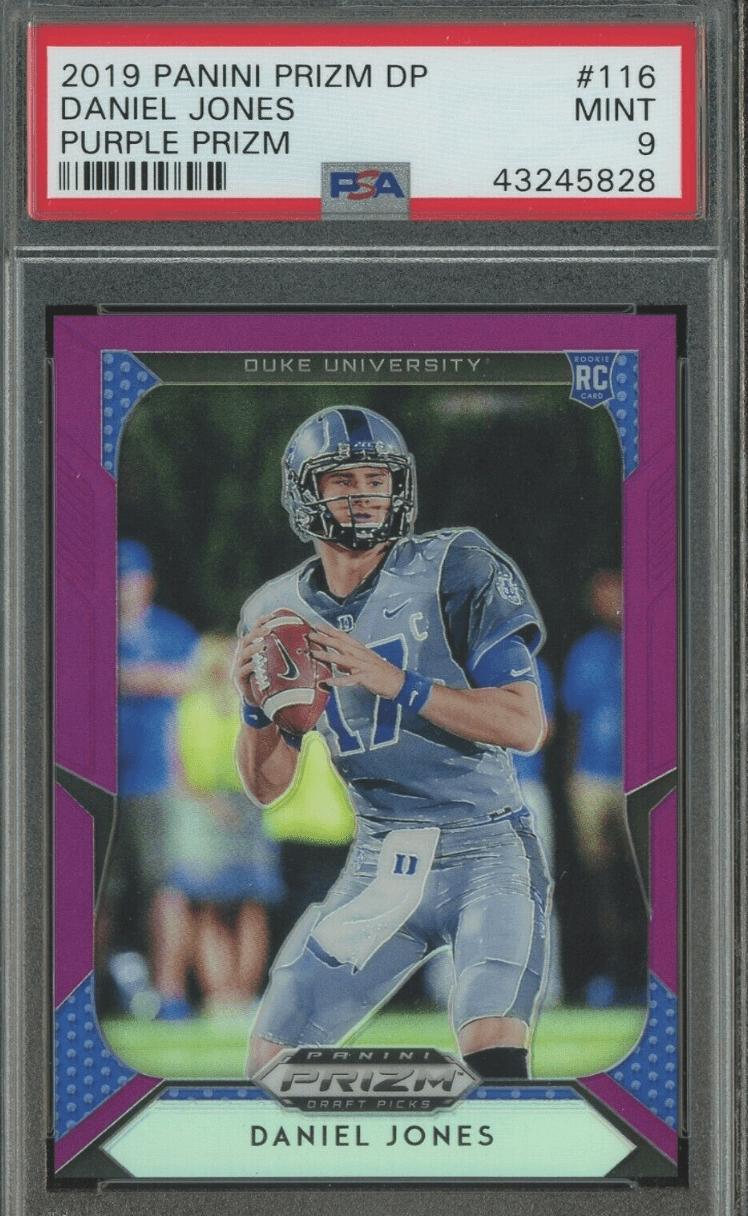 The reverse shows the original image, along with a paragraph talking about how he hit a duo of 300/100 games while playing for Duke.

A mint version of the silver card recently sold at auction for $150.

A significant step up in price and rarity, this National Treasures card comes with a prominent autograph located at the bottom, along with a small image of Jones on the front.

The back is fairly nondescript, with no stats or additional info. Instead, it has a guarantee for the signature.

The crisp design helps to make the card stand out, with a classy gold trim complementing the blue and white colors.

Another set with a large number of variations, this is a great autographed card that can normally be picked up for under $200.

It’s especially affordable considering some come with patch relics, and the parallels make it worthwhile if you’re looking for something special.

The front of the card has an RC logo, along with an autograph under the patch.

The reverse has a certificate of authenticity, along with a paragraph discussing his Independence Bowl win in December 2018.

Jones is a popular player in a position that always sells well.

Expectations have grown since he took over from Eli Manning, but Jones has thrived under the early pressure that comes with signing for an NFL team.

He recently picked up a high ankle sprain which is set to keep him out for at least a few weeks.

It would be a sad end to his 2019, as there are only three weeks remaining in the season and the Giants are already eliminated from the playoffs.

It’s a chance for Manning to say goodbye, but Jones is likely to return ready to prove everyone wrong when he comes back in 2020.