He’ll be competing with Kerryon Johnson for playing time in the team’s offense, but there’s a good chance that he could make an impact in his rookie year.

Here’s a list with three of the best D’Andre Swift rookie cards on the market right now, including heaps of information about the trio, and an investment outlook for the future.

We’ve gone through recent auction data to bring you a list with three of the best Swift rookie cards, with an option to suit almost every budget… also check back occasionally as these are early Swift rookie cards and the higher end ones will be coming on later this year.

The most popular Swift RC at auction by a significant margin, his 2020 Panini Prizm Draft Picks is a great card.

It features a strong action shot of the player with the ball clutched under one arm, playing college football for Georgia against Murray State. If you have one of the rare parallels you’ll find the serial number located at the back, while there’s a small RC logo located on the top right of the front. The on-card auto is a nice touch, placed on a white segment so that it doesn’t get in the way of the background design. The Gold Ice is great if you’re looking for an investment piece. The full range of parallels are as follows; 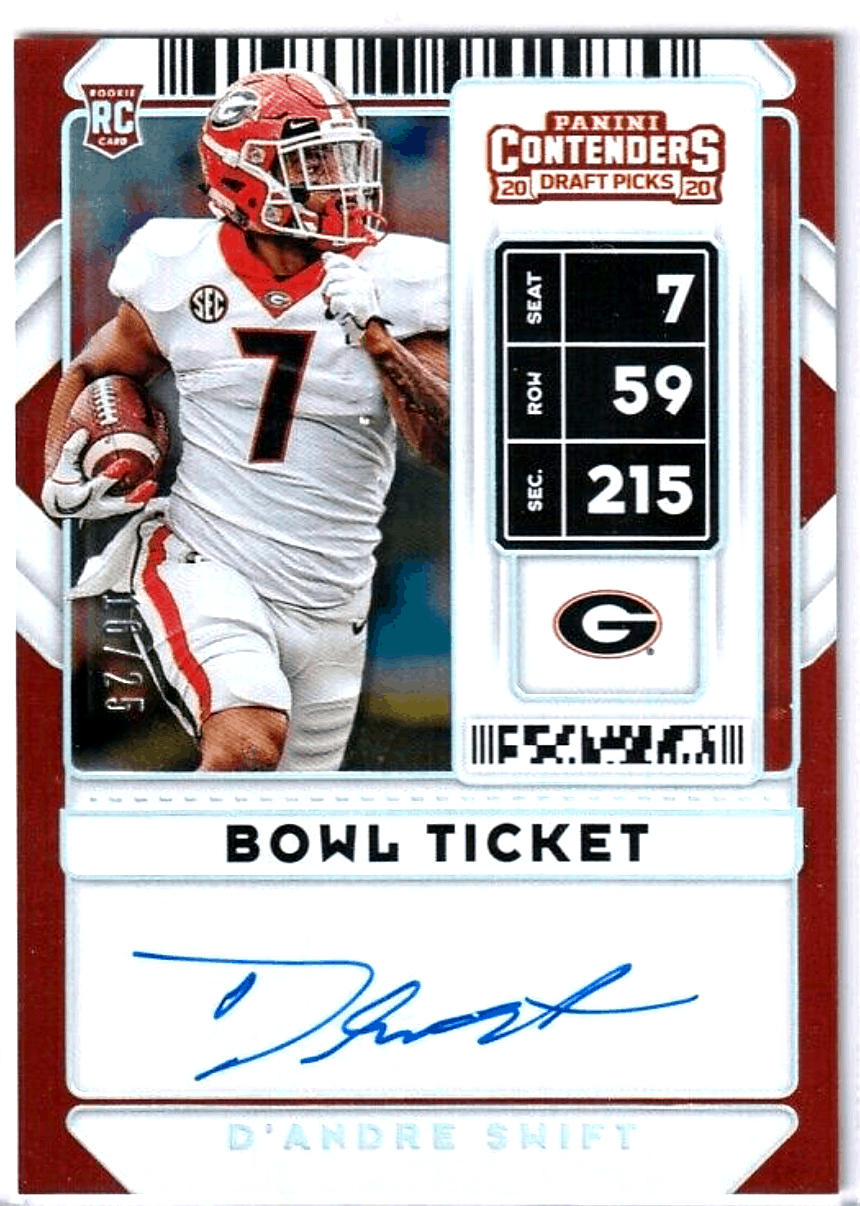 The second RC to make the list is Swift’s 2020 Panini Contenders release. It comes with a traditional ticket design, so there’s an image of the player on the left, seat numbers on the right, and a large on-card auto located at the bottom in blue ink. There are also a few image variations, featuring Swift in either a red or white college jersey, with a couple of different poses for each one.

Of the various parallels on offer, we’d opt for the Cracked Ice version thanks to the combination of a low serial number (found on the front of the card) and a strong action shot. 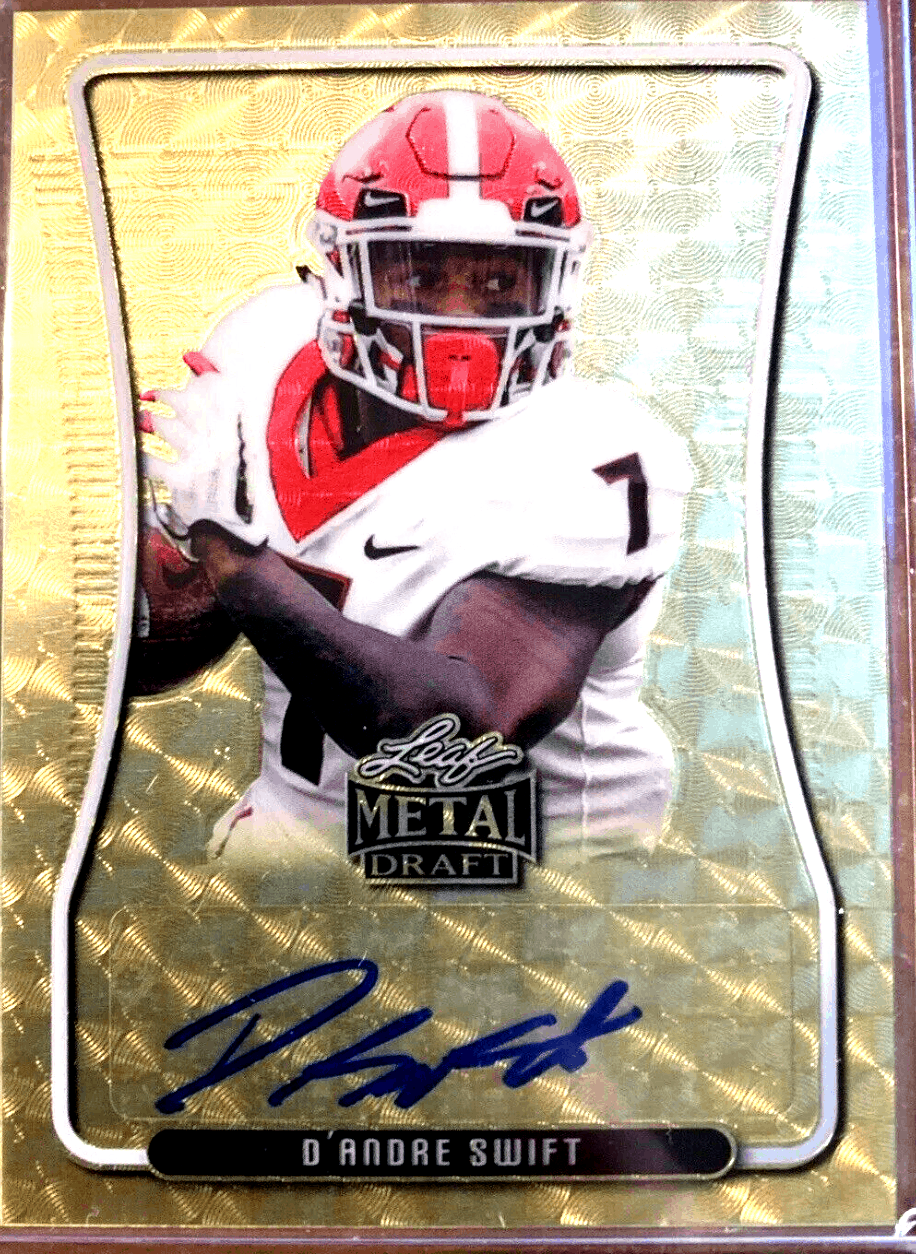 Swift has a number of cards in the 2020 Leaf set, including the base edition and a ‘Touchdown Kings’ version. His TK card is signed, while there are lots of shiny parallels to keep an eye out for. It features a large outlined image of the player with a football in one arm, with a simple background that matches the parallel color.

Leaf is often overlooked by collectors who are more interested in premium options, such as the duo of Panini cards listed above. (Which is fair, after all, this one only has a sticker autograph.) However, as an entry-level option, the TK is ideal if you’re looking for a signed parallel that won’t cost much to add to your personal collection. Some of the rarer options are also fairly popular, even if they aren’t the most expensive comparatively.

Swift rookie cards are fairly cheap as he will have to prove himself as an NFL starting running back before the value of his cards take off… if he does so you will be glad you bought in early BUT on the flip side if he tanks you will be out some cash.

Please email us at value@goldcardauctions.com if you would like an estimated value of a D’Andre Swift rookie card (include photos).

Take it with a pinch of salt, but it’s worth mentioning that Swift earned the second-best rookie running back rating with a 74 in the latest upcoming Madden release. He was also ranked third overall in a recent NFL.com list of Offensive Rookie of the Year candidates. The point is, the former Georgia RB is highly rated despite having yet to make his NFL debut.

It’s clear that he has immense potential, but we’ll have to wait and see to find out whether he’s truly ready for the big time. How long we’ll be waiting for is another factor to consider.

After all, it’s unclear whether he’ll get to start straight away as he’ll have to compete with Kerryon Johnson, Ty Johnson, and Bo Scarbrough, as well as fellow rookie Jason Huntley for playing time this year. Johnson is the most likely to start of the bunch, although injuries have limited him to playing just 18 games in the past two seasons. It could be an opportunity for Swift to make his mark instead.

Swift’s new team hasn’t won a playoff tie since the 1991 campaign, and he’s unlikely to win many games this year, but the RB is still one to watch during his rookie season with the Lions. His numbers should be solid, and that would see a bump in the average price of his rarer RC options. A Rookie of the Year award would see it rise further.

That’s as long as he actually gets a chance to show the world what he can do on a semi-regular basis.