Dalvin Cook (08/10/95) is a stud running back who was drafted by the Minnesota Vikings (41st overall) in 2017. A two-time first-team All-American, he made his maiden Pro Bowl appearance in 2019, as one of only three Vikings players to do so.

Cook looks to be in the best shape of his career heading into 2020, but a protracted contract saga has left question marks as to whether he’ll still be a Vikings player as he begins to enter his prime years.

Here’s everything you need to know about three of the best Dalvin Cook RCs, along with investment advice during a key stage of his career.

Cook is well represented in the sets of 2017, with hundreds of options if you’re going to include the numerous variations and parallels found with the majority of his RCs.

Here’s a rundown with three top rookie cards that are always popular at auction. 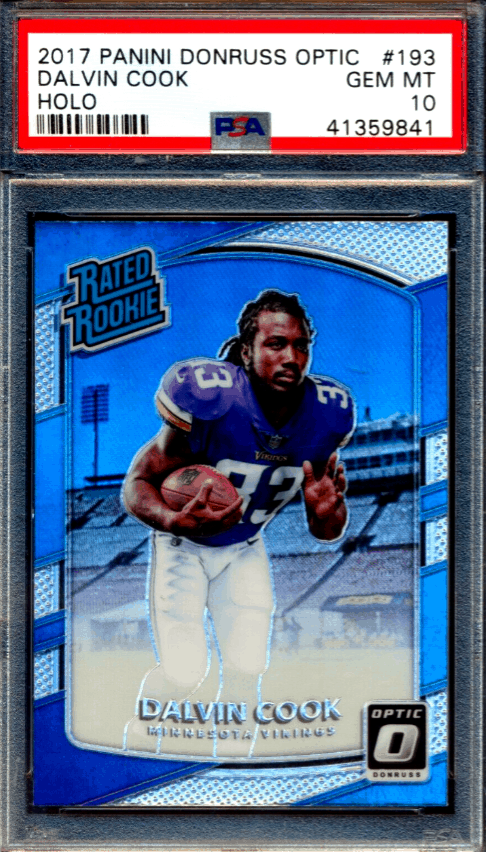 The first card on our list is the 2017 Donruss Optic. A simple release, it has a large ‘Rated Rookie’ logo in the top right corner, along with a lined image of Cook with a football tucked under one arm. The white space at the bottom does make his legs look slightly strange, but it’s a solid entry-level option.

There are heaps of parallels which focus on the border design. Options like the Holo add a bit of chrome, while others change the color scheme completely. There’s something to fit almost every budget. 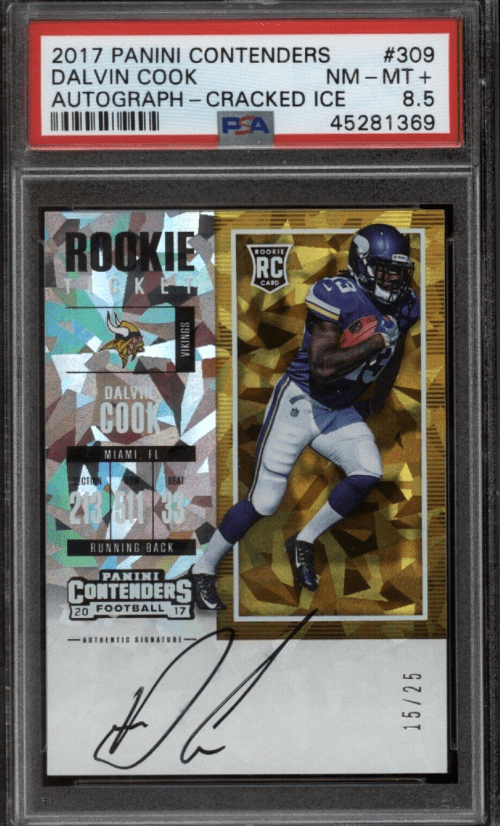 Cook has an RC in the 2017 Panini Contenders set, and it’s one of the better options overall. It has a landscape design, with the Rookie Ticket split in half to allow for a player image, ticket info, and a signature (filled in black ink) found at the bottom of the card!

We’d generally advise looking at the Cracked Ice version, as it has a great blue and yellow color scheme, and it’s serial numbered to just 25. All of the parallels are rare, and it’s worth checking out as a mid-level investment piece. 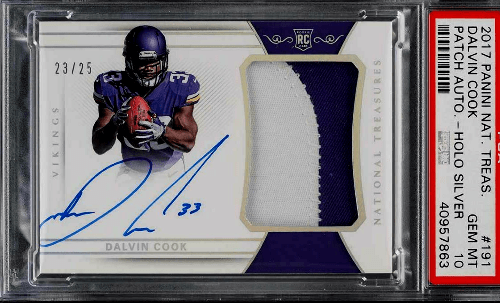 The next option we’re looking at comes from the Rookie Material Signatures segment of the 2017 National Treasures set.

As the name indicates, there’s a large patch that takes up roughly half of the card, along with an image of Cook clutching a football tightly.

Underneath the player image, you’ll find a great on-card auto-filled using blue ink, and there’s a low serial number found on all of the parallels.

We’d recommend either of the Holo versions, as they really pop compared to the base card. However, they all benefit from an understated design, while NT cards are always seen as a premium release for collectors. 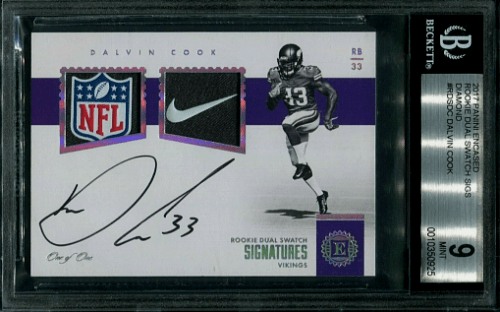 The most expensive Dalvin Cook rookie card is his 2017 National Treasures RPA. His most inexpensive rookie card but still a worthwhile investment is his Donruss Optic RC #193.

Dalvin Cook RC is correctly valued based on his performance to date with no major spikes (up or down) in the foreseeable future.

If you are interested in purchasing a Dalvin Cook football card but would like advice please email us at advice@goldcardauctions.com. 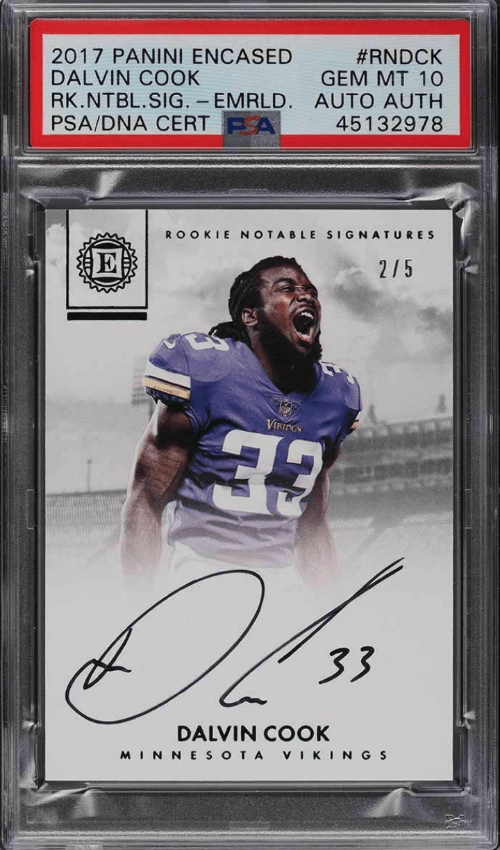 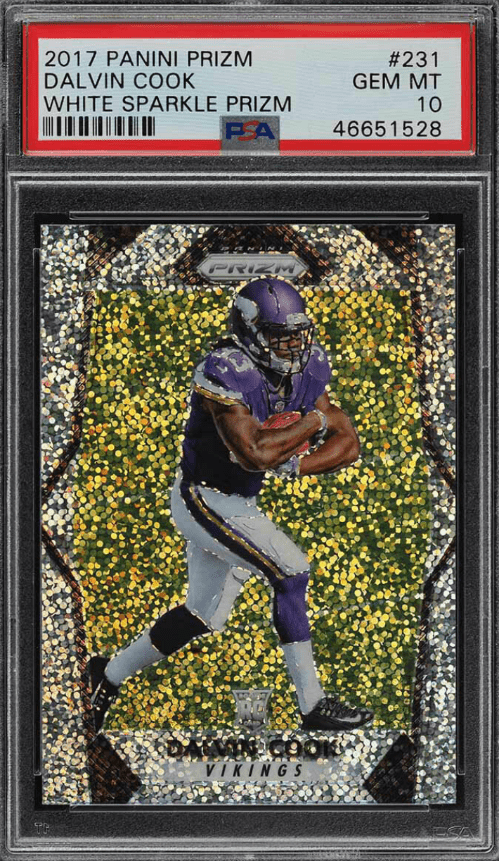 Following the departure of Stefon Diggs, the biggest offseason headline for the Vikings has been the team’s attempt at negotiations with Cook as he nears the end of his rookie deal.

In June, it was reported that the running back reportedly threatened to hold out from any team activities, including training camp and the 2020 season, unless the Minnesota Vikings signed him to a “reasonable” long-term contract.

It’s hardly a wise move in light of Covid-19, but most sports stars are insulated from the realities that the average Joe will face.

The point is, we’re not sure where he’ll end up, and whether his gambit to start being paid a ‘reasonable’ wage will pay off.

Runs may not be as efficient as passes, but Cook can be trusted to move the ball forward, and he was the Vikings’ best runner in 2019 based on expected points added.

He also plays on a team that appreciates the running game more than most.

However, RBs are more replaceable than other positions, so he’s playing a dangerous game if he overestimates the value of his hand.

On the subject of value, many of his rookie cards feature parallels with low print runs, so there are lots of choices if you’d like to pick up a rare copy, or if you’re just hoping to pick up a signed Cook RC.

They’re relatively cheap considering his potential, but much will depend on where he ends up, and whether he’s able to continue to get good numbers after he signs on the dotted line.