Rayne Dakota Prescott was born on July 29, 1993, in Sulphur, Louisiana. He suited up for the Mississippi State Bulldogs and set many records during his junior and senior seasons.

Even during Prescott’s college days, he was a quarterback who can make things happen in the air and on the ground.

From the moment he entered the NFL, Prescott found success. He managed to win the 2016 NFL Rookie of the Year Award even though he wasn’t selected until the fourth round. Despite only winning the job because of an injury to starter Tony Romo, Prescott managed to exceed all expectations and never looked back as he’s held the position since.

Now playing for America’s Team in the NFL when Dak Prescott is on his game, the Dallas Cowboys are a hard team to beat. Prescott, along with Ezekiel Elliott, is two Cowboys players who are vital to the team’s success.

Despite still being a young player that has just started the prime of his playing career, Prescott already holds many Cowboys franchise records. It’s an impressive feat considering that the Cowboys are one of the most storied franchises in the league.

Let’s check out some of Prescott’s best rookie cards for investment purposes. 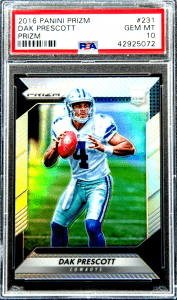 This is another Dak Prescott rookie card which is simple yet eye-catching. His photo takes center stage as we get a close up of Dak dropping back to pass.

Numbered #231 this card is ideal for a mid-level collector not looking to spend a ton of cash.

Cash In On Another Elite QB: Tom Brady Rookie Cards are a Great Investment! 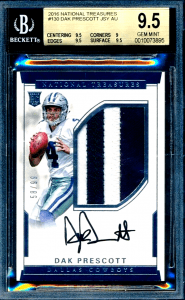 This Dak Prescott rookie card has several intangibles: strong brand (Panini National Treasures), Prescott’s autograph, a large game-worn patch, and scarcity (there are aren’t too many on the market, per the PSA Population Report website).

These factors add up to make this card an expensive – yet worthy – investment. 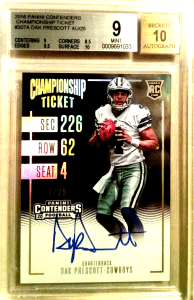 The front of the card shows a rookie card with an image of Prescott scanning the field for an open receiver.

He scribbled his autograph at the bottom of the card. There’s nothing flashy about the design.

Two words describe it: simple and slick. More importantly, it’s one card that will give you a nice ROI sooner than later.

There were too many strong Dak Prescott rookie card options to just include three on this list, so we’ve outlined one more that is worth a look. While this card may be a slightly weaker choice than the others on this list in terms of return on investment, it’s still a quality card that should appreciate in value over time. 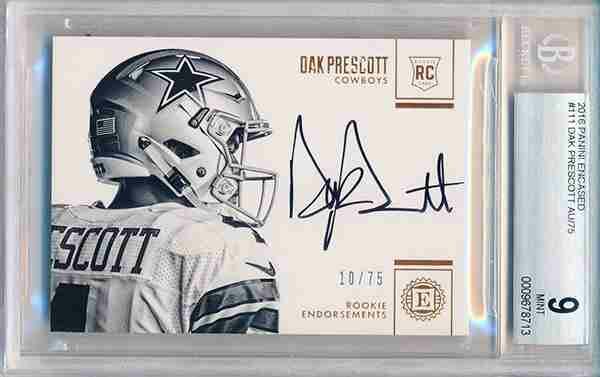 This Dak Prescott rookie card is one of the most visually stunning of any on this list and features an impressive autograph. The signature takes up the majority of the right side of the card, while the left side of the card has a black-and-white side profile image of the quarterback.

This card had a very small print run as there were only 75 cards made, a relatively low number that means there is a very small supply. This, alongside the autograph on the card that attracts collectors, means that this card is expensive when found in good condition.

Please email us at value@goldcardauctions.com if you would like an estimated value of your Dak Prescott card (include a few photos please).

Must Read: Gold Card Auctions Hot 10! (must own rookie cards!)

For the most part of his pro career, he has flourished in the spotlight – his two Pro Bowl nods speak massive volumes.

This is a durable player who will earn more Pro Bowl appearances – and possibly an NFL MVP Award – in the future.

Prescott hasn’t gotten the attention of football aficionados the way Russell Wilson and Lamar Jackson have, but make no mistake about it: he’s an elite quarterback. No ifs and buts about it.