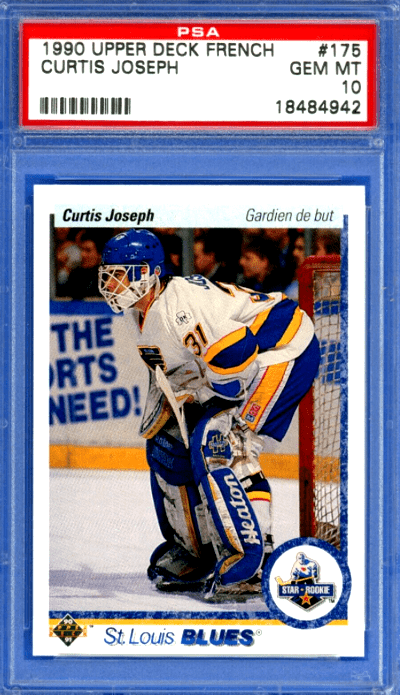 Curtis “Cujo” Joseph (04/29/67) is a retired goaltender who is best known for the colorful helmets he wore for the majority of his career.

Inspiration was taken from the Stephen King novel with the same name, while the undrafted goalie showed bite as he became the first in NHL history to win 30 games in one season for five different teams.

We’ve come up with a list containing three of the best Curtis Joseph rookie cards, along with investment advice for the next few years.

Released during the height of the junk wax era, Joseph has a range of rookie cards found in every popular set from the early 1990s.

We’ve listed some of the best options below, although they have been diluted ever so slightly by the massive print runs from the time. 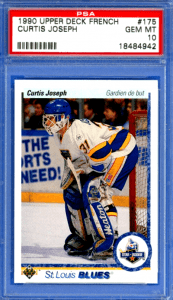 Here is the top CUJO rookie card in terms of long-term ROI. We love Upper Deck when it comes to hockey and the French version makes it even more valuable.

Numbered #175 the card shows Joseph in the net waiting to stack some pillows if required. The only thing that could have made this card any better is if it was a Young Guns UD rookie card. 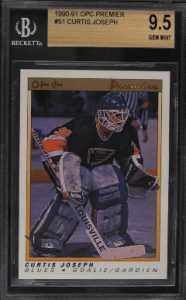 O-Pee-Chee is Topps’ Canadian counterpart and is often preferred when looking at older hockey cards. Many OPC cards (including this one) are bilingual, sharing both French and English text.

The Joseph RC is a ‘Premier’ release, so it’s wrapped with a gold border alongside a great action shot of the player.

OPC cards are some of the best in terms of pure value, and the Joseph card is no different in this regard. 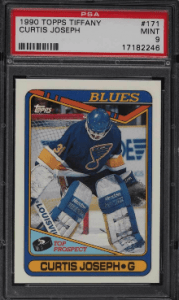 The next Curtis Joseph RC to make the list is from the 1990 Topps Tiffany set.

From 1984 to 1991, Topps decided to release upgraded versions of their sets under the Tiffany banner.

These cards were glossy in comparison to base editions, while you’ll also be able to tell the difference by checking out the stars (**) located on the reverse.

It notes that Joseph is a ‘Top Prospect’, while the blue and yellow border blends in well with his St. Louis jersey. 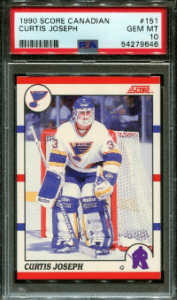 The 1990 Score Hockey set is one that we’ve checked out recently, as junk wax era hobby boxes continue to receive increased interest from collectors.

Joseph has a couple of cards in the set, including the Young Superstars release (#15) and this base version (#151).

We’re looking at the latter, although both are wrapped in the familiar red, white, and blue design which makes the 1990 Score set instantly recognizable to anyone over the age of 30. 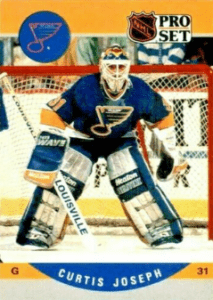 Despite amassing a total of 454 career wins in the NHL, Joseph never got his team to the Stanley Cup Final or made an NHL postseason All-Star team.

It’s seen as one of the main reasons why he never made it into the Hall of Fame, which is a notoriously difficult task for players in his position.

The majority of the goalies who are enshrined played the bulk of their career prior to World War II, so you have to go above and beyond to be considered for contention.

With no Stanley Cup or All-Star appearances, it’s an easy decision for the Selection Committee, even if his numbers are comparable with the very best.

“Unless you’re looking at PSA 10 copies, the majority of his rookie cards are almost worthless in the present day.”

It’s a combination of the massive print runs from the time, as well as the lack of a spot in the Hall of Fame.

Altogether, it adds up to become an investment opportunity that we would probably avoid, as there are better opportunities for profit elsewhere.