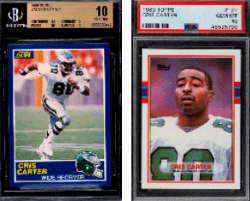 The Philadelphia Eagles selected Cris Carter (11/25/65) in the fourth round of the 1987 NFL Supplemental Draft and ended up having a Hall of Fame career in the NFL.

He was previously an All-American wide receiver at Ohio State University.

Carter posted modest numbers in his rookie year. He ended the 1987 campaign with five catches for 84 yards and two touchdowns across nine games played.

However, Cris Carter would go on to become one of the premier possession receivers in NFL history. He overcame substance abuse issues to become an NFL Hall of Famer.

Cris Carter’s most notable rookie cards all originate from sets printed in 1989. 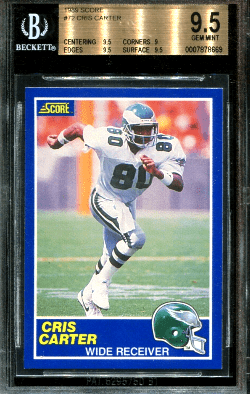 The 1989 Cris Carter Score Football RC #72 looks just like a 1989 NFL rookie card should. It’s kitschy enough to feel like the 80s without the lazy Junk Wax feel.

A rookie Carter shows his choppy, high-kneed running style in the classic 80s-era Eagles whites. His bulky shoulder pads are a sign of the era.

The card features a blue border that dovetails into a white-bordered nameplate. A yellow “Score” logo occupies the upper-left corner, while an Eagles helmet emblem is in the opposing corner.

The 1989 set was Score’ first foray into football cards. It also contained player cards from other legends like Barry Sanders, Bo Jackson, and Joe Montana.

Even as one of the premier Cris Carter rookie cards, you’ll be able to add this one to your collection at a palatable price point. Broad production

Cris Carter has a knack for producing card-ready images. His 1989 Topps Football RC #121 shows a mustached Carter sporting raised eyebrows with a “can’t be bothered” look.

The image tells the story of Carter’s limited involvement as a rookie, but it makes for a memorable rookie card. Carter wears a logo-less jersey with large, green “80”‘ numbers.

With few design features, this card has a portrait feel. A white border includes a thin, red sub-border around Carter’s image. Red, baby blue, and purple accents are an interesting touch. 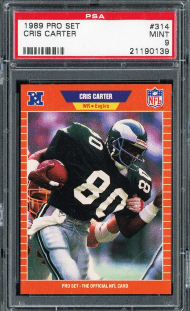 The 1989 Pro Set batch is what you typically expect when you think of Junk Wax. Every card has the same jarring, orange background with white hash marks along the side.

Never mind that this orange backdrop clashes with Carter’s hunter green Eagles jersey—orange was the template for 1989 Pro Set, and so orange is what you get.

Must-Read: The 7 Greatest Football Rookie Cards of All-Time (for Collectors)

The image of Carter is memorable. The receiver looks more like a running back, carrying the ball high and tight as defenders reach for him.

Gem Mint copies of this card are, like the other Carter rookie cards, very affordable.

The most valuable Cris Carter rookie card is the 1989 Score Football RC #7 followed by the 1989 Topps RC. The Cris Carter Pro Set RC is hardly worth its weight in paper and finding it graded can be downright impossible.

Looking to purchase a sports card as an investment but need help? Email consulting@goldcarductions.com for more information about the Gold Card Auctions Consulting Service.

Cris Carter has a lot going for him. A long, productive career. All-Pro honors. NFL records. A Hall of Fame nod. Widespread respect in the football community.

Cris Carter’s cards, unfortunately, do not have nearly as many points of pride. Strikes against Carter’s rookie cards include:

It’s been more than four decades since Carter’s rookie cards were printed. And yet, the cards’ price points barely register on collectors’ radars.

Collectors may see value in these Cris Carter rookie cards. He’s a Hall of Famer who was a key piece of legendary Minnesota Vikings teams. There’s a fan for every card, right?