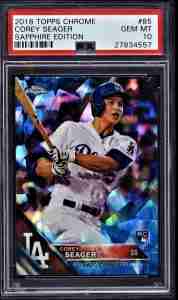 Corey Seager is a professional baseball player that currently plays for the Texas Rangers. However, he is new to Texas, and instead, he made a name for himself with the Los Angeles Dodgers.

Seager was a highly sought-after prospect in his high school days. He committed to play for the University of South Carolina on a full scholarship but never attended.

When the Dodgers selected him 18th overall in the 2012 MLB draft, he received a $2.35 million signing bonus to forego college and sign with the Dodgers immediately.

As is the case with almost all young players, Seager spent time in the minor leagues. He performed well and eventually earned a callup in 2015. He appeared in 27 games in the 2015 season, performing well.

His performance at the end of the season earned him a full-time job with the team in 2016. Seager never looked back and has been a standout in the league since then.

His performance as a rookie earned him the Rookie of the Year award and an all-star selection. He was an all-star again in 2017.

Unfortunately, injuries have plagued Seager since the 2017 season. The only season he played more than 100 games since then was 2019.

However, Seager is still a great player when he is on the field. On the Dodgers’ run to the World Series in 2020, Seager was named the NLCS MVP and World Series MVP.

After three years of taking one-year contracts, Seager left the Dodgers in 2021, signing a 10-year, $325 million contract with the Texas Rangers.

Now that you have the background on Corey Seager, you are probably open to purchasing some of his rookie cards. There are several options for you to choose from.

Here we will be looking at the three Corey Seager rookie cards that we think are best. Our assessment was based on prestige and value.

This card from Topps is the flagship Corey Seager rookie card. It has a crystal clear image of Seager following through after hitting the ball. He is wearing his white Dodgers uniform.

The bottom of the cards displays his name, position, and team. You can then look to the top left corner of the card to view the Topps Chrome logo. The IA logo is in the bottom left.

Despite being a vertically oriented card on the front, the back is horizontal. On the back, you can read about Seager’s career in the farm system. It displays his minor league statistics as well.

Although there are several excellent Corey Seager rookie cards out there, this one holds the most value. 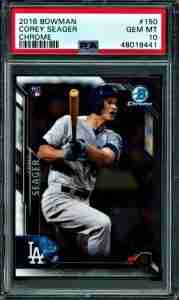 The next card we want to look at is similar to the Topps card above, but this card is from Bowman. Like the Topps card, it features Seager in his white Dodgers uniform as he follows through after hitting the ball.

Additionally, the back of the card is horizontal. It displays information about his short stint with the Dodgers in 2015, as well as his career in the minor leagues. 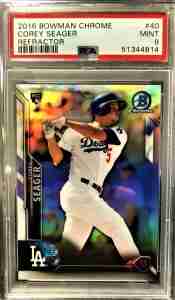 The final card we are going to look at today is also from Bowman. Once again, this card features Corey Seager in his white Dodgers uniform following through on a swing at the plate.

The logos on this card are identical to those on the card above, and there is similar information on the back of the card.

There is not a lot that makes this card stand out, but it is an appealing option. The number one reason for that is its rarity. Only 499 copies of this card were printed, and as a result, it is an interesting option for collectors.

The value of Corey Seager rookie cards varies, but they can all be had for somewhat reasonable prices. The Topps card is hard to come by, and as a result, it usually sells for the most.

Its sapphire background is appealing to collectors, especially when in mint condition. As a result, these cards usually sell for several hundred dollars. Some copies have even sold for more than $1000.

The two Bowman cards are much cheaper options. The first one can be bought for $40 to $90 in PSA 10 condition. The second one is a little more expensive because of its limited run. However, it can still be purchased for $100 to $150 when in PSA 10 condition.

Although the Topps card is quite expensive, the Bowman cards we listed can still be purchased at fairly reasonable prices. As a result, we believe they are solid investment options.

Corey Seager is still only 29 as of 2022, and as a result, he could still have several good years ahead of him.

The only thing that concerns us is that he has struggled with injuries over the years. If they continue, there might not be much time for the value of his cards to rise.

Still, we believe that investing in his cards is a reasonable move to make, especially if Seager gets into the Hall of fame someday.