The Los Angeles Rams drafted Cooper Kupp out of Eastern Washington in the 3rd Round of the 2017 NFL Draft. 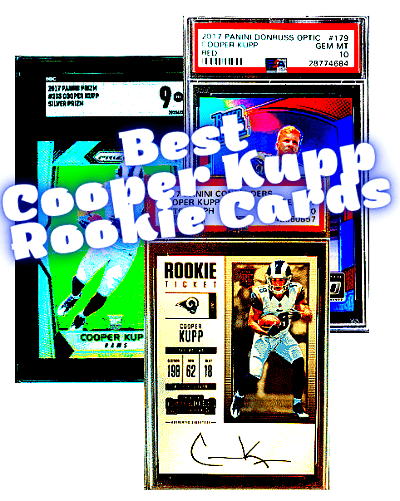 As a talented receiver with Hollywood-ready looks in a massive market, how do Cooper Kupp’s rookie cards stack up? 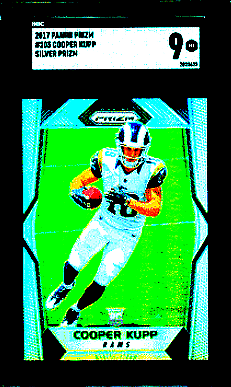 The Panini Prizm set has just enough shine to catch collectors’ eyes but not so much as to be flashy. Kupp’s rookie year Prizm fits this billing.

Kupp’s image is the centerpiece of the card, flanked with the typical embossed silver side banners. The wideout wears the blue and white Rams uniforms that the franchise has since moved on from in favor of more exciting threads.

Kupp grips a vibrant red football confidently in his right hand, head focused downward and forward as he makes a subtle forward movement.

The card’s bottom border is Kupp’s nameplate, and the silver “RC” emblem found so commonly on modern Panini cards. The light’s shine provides a rainbow sheen, the telltale appeal of all Panini Prizms. 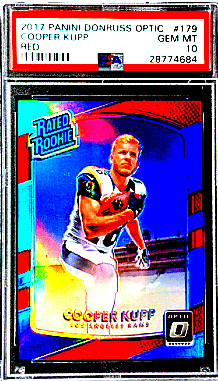 Panini Donruss Optic Rated Rookie football cards have a definite timelessness to them. Not as quintessentially modern-feeling as the Prizms, the Donruss rookies take themselves less seriously.

The variable color scheme adds to the fun-ness of these rookie cards, as illustrated by the 2017 Cooper Kupp Panini Donruss Optic Red RC #179 (/99).

The card features Kupp in his blond-locked splendor, helmet off, and beard trimmed expertly as he cradles the football in the crook of his right arm.

Kupp is stern as he elevates his right leg slightly in the air, mimicking a running motion. A subtle silver outline gives Kupp’s LA-ready image that extra little pizzazz.

Donruss does the rest of the work, surrounding Kupp with a striped, blue-and-red border with a carnival feel. The border stops its inward encroach at the arched outline of Kupp’s photograph.

The blue stripes in the border have a refractive sheen, while the red ones feature an embossed jersey prints. The iconic, light blue Rated Rookie emblem is in the upper-left corner. A lower nameplate and Donruss Optic emblem (bottom right) complete the card’s pleasing design. 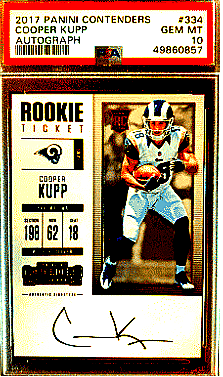 Panini Contenders’ Rookie Ticket is a hot ticket every year. An excellent design with an autograph featuring the year’s top rookies—what is not to love?

Cooper Kupp’s 2017 Rookie Ticket features the possession receiver in a familiar stance, the ball tucked securely between his right hand and right elbow.

“This card will not knock your socks off immediately, but the longer you take it in, the more you can appreciate its restrained, multi-faceted layout.”

Kupp’s legs are splayed, giving him a full range of potential motion. His gaze, cast downward, gives no clues about his next move.

This image occupies the upper-righthand portion of the card. The rookie ticket is mirrored on the left side, a series of lines, numbers, and logos meant to emulate a real NFL game ticket.

At the bottom of the card is a super-distinct Cooper Kupp signature. It features a prominent “C” and “K,” with horizontal lines emanating from each (those lines presumably translate to “ooper” “upp”.

If you would like an estimated value of your Copper Kupp football card, please email value@goldcardauctions.com.

Cooper Kupp’s name does not pass the “casual sports fan” test. If you do not follow the NFL, you likely do not know who Cooper Kupp is.

Those who follow football know that Kupp has been a reliable, spectacular receiver since he was a rookie.

There are several bonuses going for Kupp, including that he has played his early years in one of the league’s largest markets. And, as a receiver, there is always room for more attention.

Kupp, though, is an unassuming personality. It is the rare non-quarterback who becomes a true superstar, and that fate seems unlikely for the serviceable Kupp.

Still, Kupp’s most acceptable rookie cards have shown strong interest—just not the kind of interest that would allow you to take a year off of work after you sell his card.