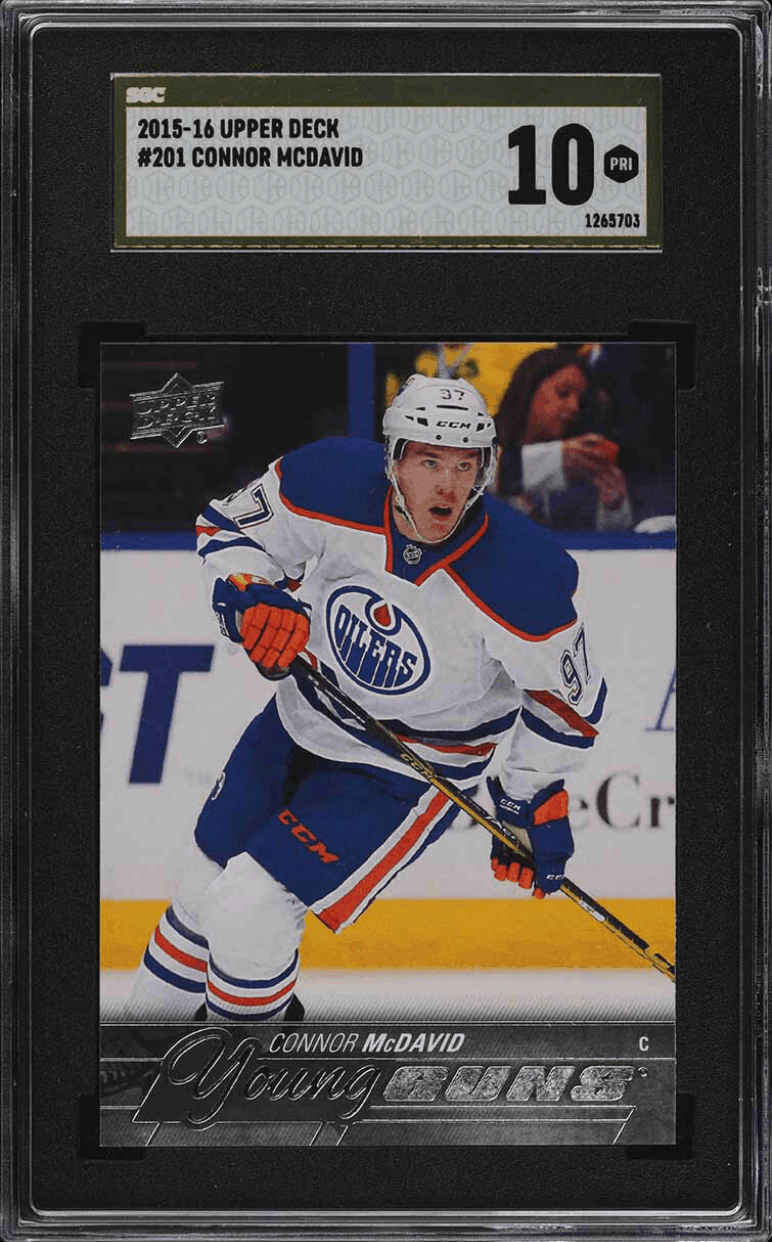 Before the NHL, he owned the highest points-per-game average (2.55) in the CHL since Sidney Crosby for Rimouski (QMJHL) in 2005.

Connor McDavid Rookie Year Stats were good enough to place him third in the voting year (i.e., Calder Memorial Trophy). He played only 45 games but scored 16 goals to go along with 32 assists for 48 points.

Many hockey experts consider McDavid to be the best player in the league and have made the All-Star game every year since entering the NHL.

McDavid has an uncanny ability to control the puck at the highest of speeds; when you combine that with the explosive breakaway speed he possesses, you have one hell of a hockey player.

Let’s take a look at the best Connor McDavid Rookie Cards money can buy. If you have any questions about our picks please leave a comment or email us at info@goldcardauctions.com. 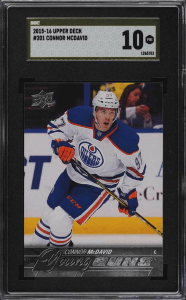 The Connor McDavid Young Guns rookie card is a must-have for investment purposes. If you’re a collector of Hockey cards, you know that the Young Guns are among the most popular rookie cards.

The Connor McDavid Young Guns Rookie Card is numbered 201 and shows Connor skating up ice in what looks like a neutral zone turnover. His name is placed at the bottom on top of the words YOUNG GUNS. 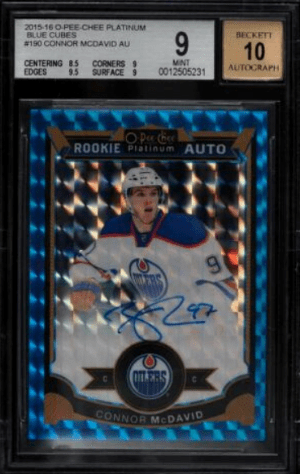 The Connor McDavid O-Pee-Chee rookie card is one of the more popular of his cards especially the high-end parallels like the one shown above (2015 O-Pee-Chee Platinum Blue Cubes Connor McDavid rookie autograph /35 #190). 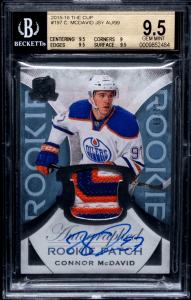 Better have a HUGE investment war chest if you plan on owning this baby. Cup #97 shows a picture of Connor McDavid skating up ice looking for the biscuit. The card features a game-used patch to go along with his autograph—a brilliant card with a sharp price tag. 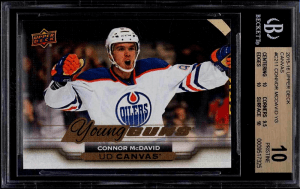 Here is another smooth-looking UD Young Guns card but not as popular as the first (but we like this one more). The Connor McDavid Young Guns Canvas card features Connor raising his gloves after a goal scored.

The card is numbered #C211 and shows Conor cheering in what we assume was a spectacular goal by McDavid. Centered at the card’s bottom is the Connor McDavid name, which is sandwiched between the words “Young Guns” and “UD Canvas.”

We like the photo better in this Young Guns version vs. the 201 version. Both are must-have McDavid rookie cards, however. 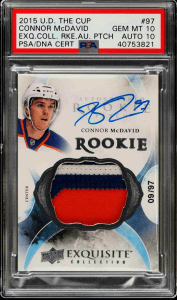 The card is numbered #97 and shows McDavid looking up ice with an odd look on his face. Like, what the hell is going on here. This face isn’t surprising given the team for which he plays.

A great card for any McDavid rookie card collection/investment, the reverse reads the same as the Connor McDavid The Cup rookie card.

You’re not going to see this card up for sale often, but we suggest you purchase it if you do. Another Upper Deck produced a card and showed McDavid skating down the ice with his head up looking for an incoming pass. 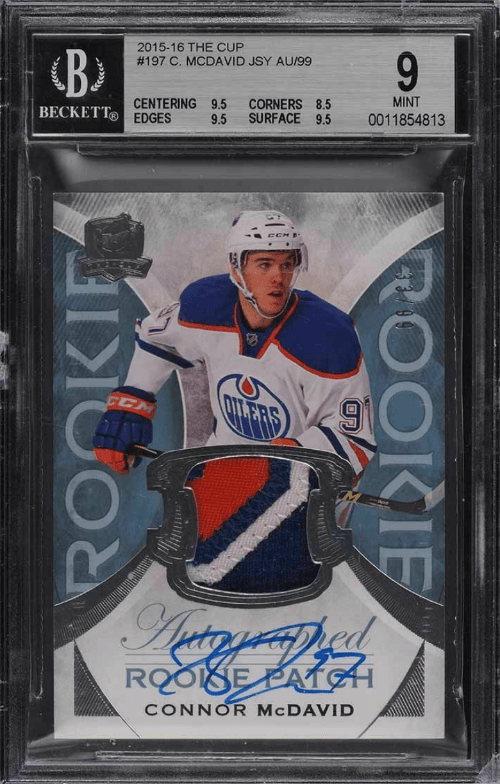 With all sports cards, his rookie cards’ value is hard to predict as they can change by the day. McDavid rookie cards, however, should do very well over the next three to six years while he is in his prime compared to other NHL hockey cards.

Looking to purchase a Connor McDavid rookie card and need advice? Hit us up at advice@goldauctions.com. 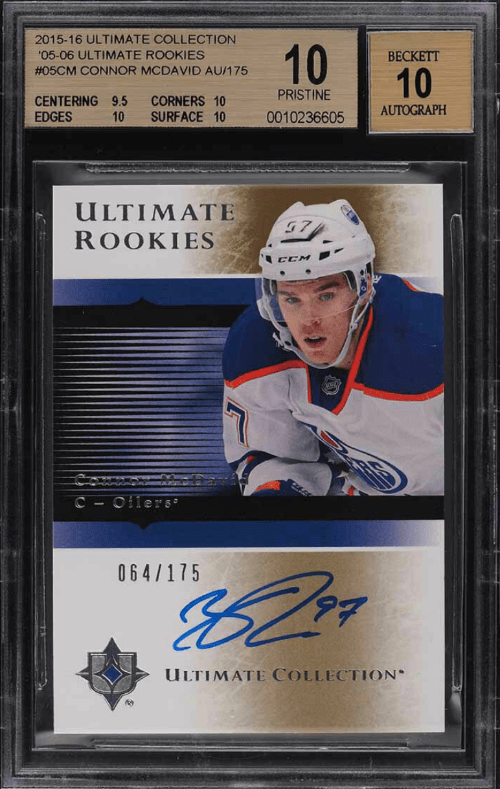 McDavid rookie cards should have a nice run for the next 3 to 5 years while he is one of the best players in the game. Owning a few high-grade Young Gun cards is a smart investment

If you have the war chest to snag the “The Cup” or “Exquisite Collection” Connor McDavid hockey cards you are doing very well for yourself and are in another league of collecting… bravo.

A Connor McDavid rookie card can be worth a few hundred or a few thousand depending on the card.

What is the most expensive Connor McDavid rookie card?

How much is a Alex Ovechkin rookie card worth?