Colin Kaepernick has been one of the most influential athletes of this past decade, and his name will go down in the history books as being synonymous with this time period which has been characterized by social activism from athletes.

Kaepernick had a great run as one of the better quarterbacks in the NFL that culminated with him scoring two touchdowns in the 2013 Super Bowl.

We’ve come up with a list of the three best Kaepernick rookie cards for investors looking to get in on the game.

There are plenty of rookie cards available, but here are three of the best from an investment stand point.

The first card on this list is Kaepernick’s 2011 Topps Chrome card.

This card features a great shot of Kaepernick unleashing a deep ball down the field in what we can only assume is a touchdown.

While there are other Kaepernick cards that are worth more money, the Topps Chrome card remains the most popular out of all Kaepernick rookie cards.

Despite its lack of unique features such as an on-card autograph or jersey patch, this card remains extremely popular and this is a great investment option.

Next up is this beautiful card from the National Treasures collection which has quickly become one of the most popular among NFL sets.

A large jersey patch is featured prominently on the left side of the card, showing off the colors of the 49ers. In addition to this patch, the card also has an on-card autograph and those two factors combine to make this card an absolute gem.

The card is limited to only 99 copies and features an image of Kaepernick standing tall in the pocket on the right side of the card.

This is one of the most luxurious Kaepernick rookie cards and it commands a high price, deservedly so. 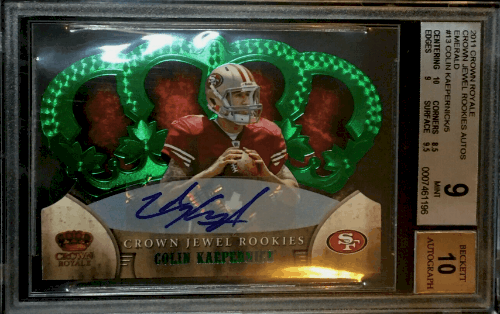 The last card on this list is the 2011 Panini Crown Royale card which comes from the Rookie Silhouettes set.

Kaepernick’s image is enhanced by a white border, which helps it stand out against the gold and white background.

The card has a jersey patch which is behind the image of Kaepernick, as well as an on-card signature below his image.

This is another premium product that is a great option for investors who are looking for a high-end Kaepernick option. 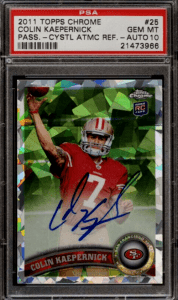 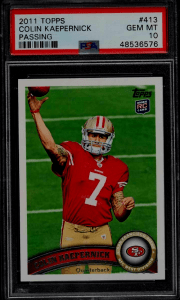 Find us on Social!:

Beyond his huge influence off the field, Kaepernick was also a great player on the field and led his San Francisco 49ers to the Super Bowl in 2013 where they lost by three points.

Still, Kaepernick was a dual-threat quarterback that scared teams as much with his legs as he did his arm. He allowed the 49ers to be one of the best teams in the league for a few seasons and started this wave of mobile quarterbacks.

Kaepernick has had a huge influence on not only football but our society as a whole and for that, his cards are a great investment option.

His name is far-reaching across many different communities and with options available at many price points everyone from novice collectors to serious investors can get in on the action… but why would they want to… avoid this guy at all cost.