His very first year facing major league pitching he jacked a mind-blowing 39 homers and 97 RBIs in only 132 games.

The Dodgers knew they had something very special on their hands… he also paid of card collectors who picked up a few of his RCs before making his debut in 2017.

For whatever reason Bellinger 2nd season in the league wasn’t as good as his first (sophomore slump?) but in all honestly, it was still pretty damn good as he hit 25 homers with 76 RBIs and a .260 batting average… 90% of the league would be pleased with those numbers.

In 2019 he broke out and made it clear he is one of the best players in the game! He jacked the ball out 47 times, batted .305, and had 115 RBIs… all career highs… as you might expect the price of his rookie cards soared to new heights.

Now that we pretty much know what this kid is made of let’s take a look at the top-rated Bellinger rookie cards for investment purposes.

The card shows Bellinger roping the ball down the line for what we can only assume is a stand-up double.

The Topps logo is in the top-right hand corner of the card while the position (1B/OF), the team (Los Angeles Dodgers), and the player’s name (Cody Bellinger) all detail the bottom of the card.

Our favorite Bellinger rookie card and one of the better-looking ones to boot.

The card shows Bellinger rounding the base paths after a MONSTER homer dead away to center field… KA-BOOM!

Here is our favorite Bellinger RC images-wise as it displays Cody with the beautiful Dodgerblue uniform while lifting the ball of the shortstops head for a double.

Not the most valuable Bellinger RC but a beauty.

The 2017 Topps Dynasty Bellinger RC is designed for high-end collectors as there is not a base card that can be had for a lesser amount.

The 2017 Topps Heritage High Number Blue Border Bellinger rookie card is the final card on our list and with good reason.

First, the card is great looking, and second, it is pretty rare.

The card shows Bellinger holding the bat while mean-mugging for the camera with a beautiful powder blue color to outline the card.

The player’s name (Cody Bellinger) is at the bottom of the card while the player’s position and team are features in a red bubble with yellow lettering in the right-hand corner. 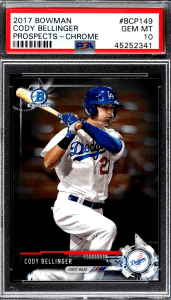 The value of his cards should only go up as Bellinger enters his prime and if he can win a World Series ring or three… WATCH OUT!

If you would like us to estimate the value of your Cody Bellinger card please email us at value@goldcardauctions.com.

Thinking about making a Bellinger rookie card purchase but would like a second opinion? Please email us at advice@goldcardauctions.com. 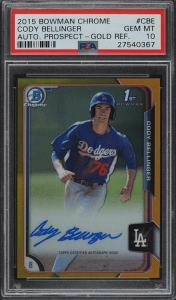 There are various reasons why Bellinger‘s rookie cards are so expensive. His time in the National League is a major factor, while he’s also the son of former MLB star Clay Bellinger.

Then there’s his recent form and the sheer variety of appealing cards on offer. He received 19 of 30 first-place votes for the M.V.P. Award from the Baseball Writers’ Association of America, highlighting his progress in 2019.

He could quickly go on to greater heights in the years to come. While collectors used to ignore prospect and minor league cards, the increased prices and interest show a change in attitudes, and there’s something for every budget.