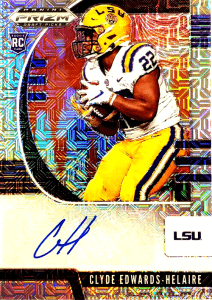 Although a bit undersized at 5’8 210 lbs he has very good lower body strength and displays good instincts on inside zones with good route running ability and sufficient hands to makes catches out of the backfield.

Let’s take a look at the top-rated Edwards-Helaire rookie cards to date from an investment standpoint. 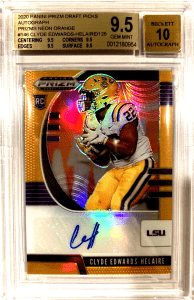 This is our favorite Edwards-Helaire rookie card for the time being and is the one to buy if you just HAVE to have one.

Numbered #146 the card shows Edwards-Helaire with the pigskin looking to make a few jukes and then take off like a rocket… something he made a living doing in 2019 at LSU. 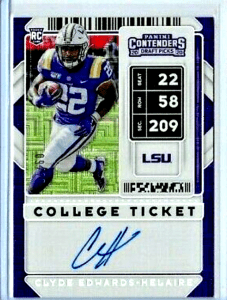 Another decent Edwards-Helaire rookie card pick for collectors who can’t wait for the bigger brands to come later in the year.

Numbered #125 the card shows Edwards-Helaire with the football while scanning the opposing defense for weaknesses. 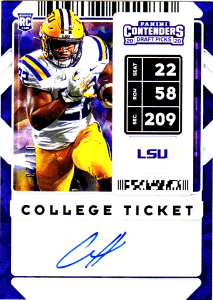 The third and final card on our list is… surprise! another Panini…

Numbered #125A the card shows Edwards-Helaire in his home LSU white jersey running for his life down the field with breakout speed!

Clyde Edwards-Helaire rookie cards are already selling in the hundreds and this is for his lesser rookie cards… imagine how much some of the heavy hitters will go for in the fall.

Some collectors feel he is the next Priest Holmes while others are shouting at the top of their lungs overrated.

We are going to take a wait and see approach with Mr. Edwards-Helaire.

On one hand, he is on the defending Super Bowl Champs that have an explosive offense that that seemingly would fit him like a glove… on the other hand, there are a lot of mouths to feed in KC and one miss block resulting in a Patrick Mahomes sack could lead to a benching… not to mention Damien Williams played pretty well down the stretch last year.