Despite never winning an elusive NBA Championship, Webber ended his career as a five-time NBA All-Star and a five-time All-NBA Team member.

He was prolific in college, making two trips to the National Championship Game in consecutive seasons as the leader of the infamous Fab-Five.

In later years, Webber became an analyst after knee injuries forced his retirement in 2008.

Here’s a rundown with three top Chris Webber rookie cards, including investment advice if you’re hoping to pick up a few pieces shortly.

Released in the 1993-94 season, Webber has a decent number of rookie cards, with the majority being worthless. However, there are a few decent options, such as the first card to make a list. 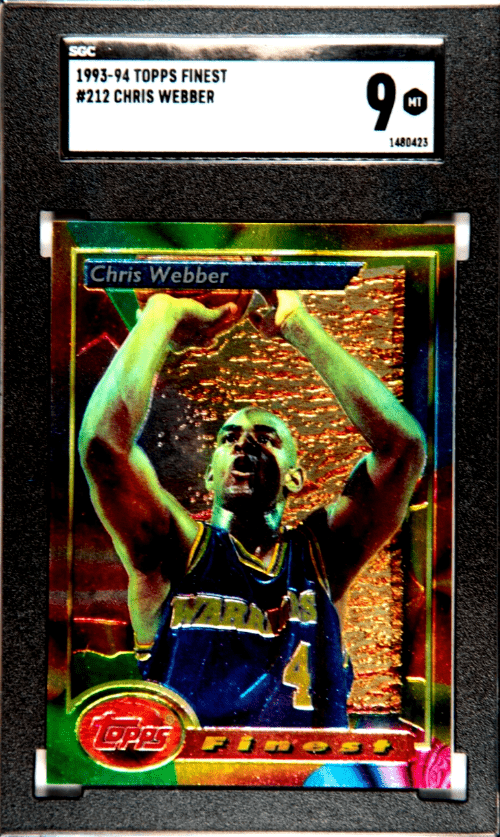 The 1993-94 Finest NBA set was the first basketball released by the brand, with Webber featured as he attempts to make a shot on the front of the card. A thin line makes up the border, although the background stretches to the edges.

The most expensive RC by far is the Refractor version, which has a familiar rainbow shine when held up to the light. Copies of the latter can go for three-figure amounts, while they’re incredibly condition-sensitive at the corners and on the surface. You’ll find the second image of Webber in reverse. 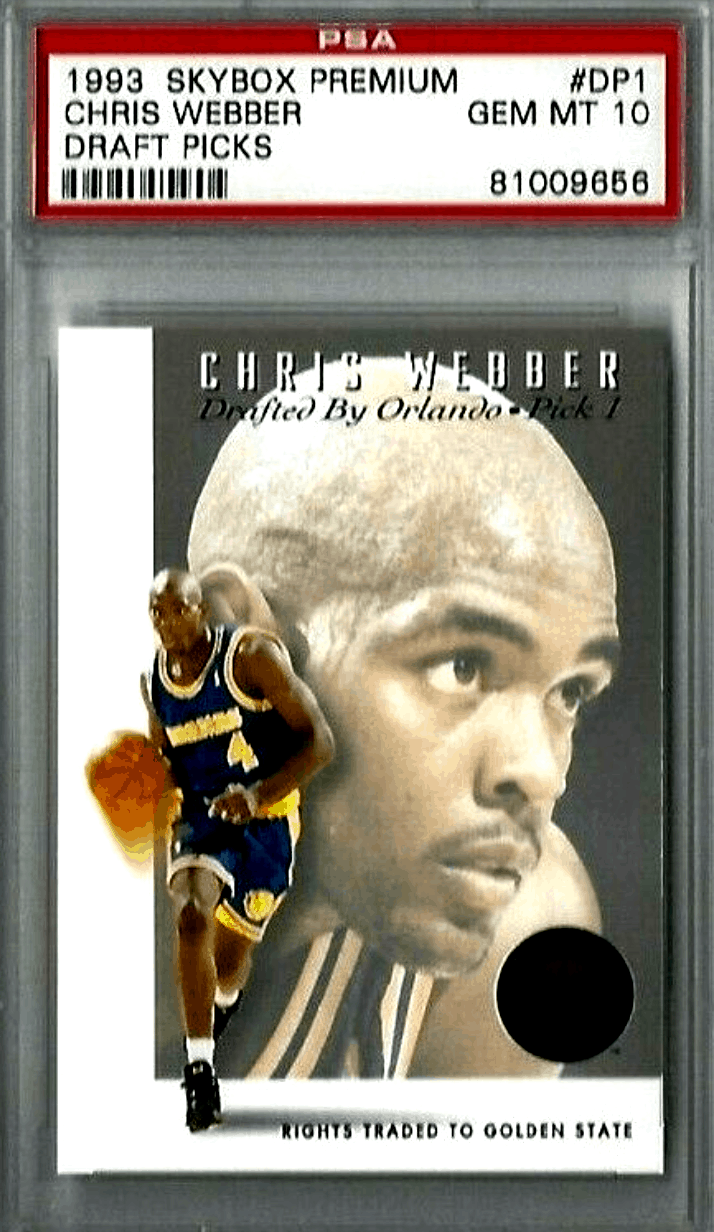 Generally, SkyBox releases from the ‘90s are great to look at, with solid design choices and memory cards. This one doesn’t deviate from the norm, with a small image of Webber found in the bottom left corner, dribbling a ball that is made to look like it’s in motion.

The trouble is, it looks more like an orange smudge on the front of the card, while the main profile picture is faded to make way for the smaller action shot at the base. The result is still a classy look, especially compared to many garish sets from the ‘90s. 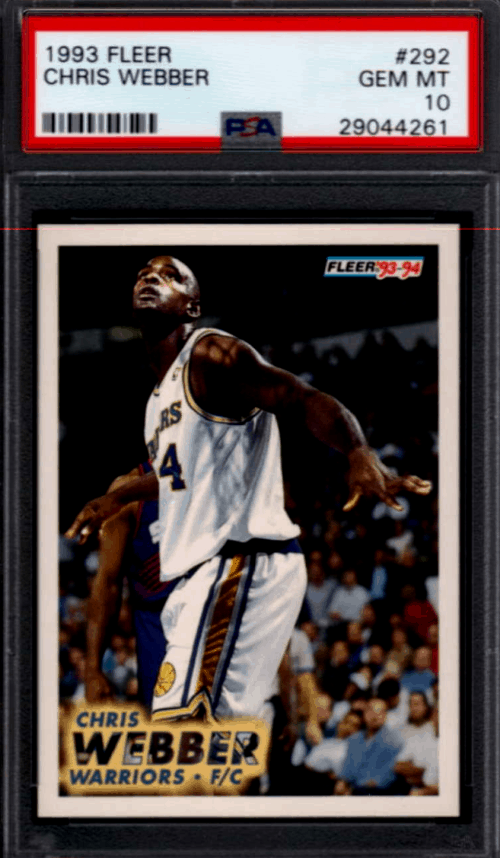 The final card to cut is his ‘93 Fleer release. It has the best image overall, with a great action shot of Webber wearing a crisp Warriors jersey as he stares up toward the rim. A stencil effect is used for his name at the base, with the background forming the background against yellow paint.

It has a thick white border and a small logo at the top to show that it’s from the ‘93-94 Fleer set. As with the SkyBox card, gem mint versions are at the lower end of the scale, which is understandable as it was released at the height of the junk wax era. Print runs were massive, and that’s reflected in the prices seen in the present day. 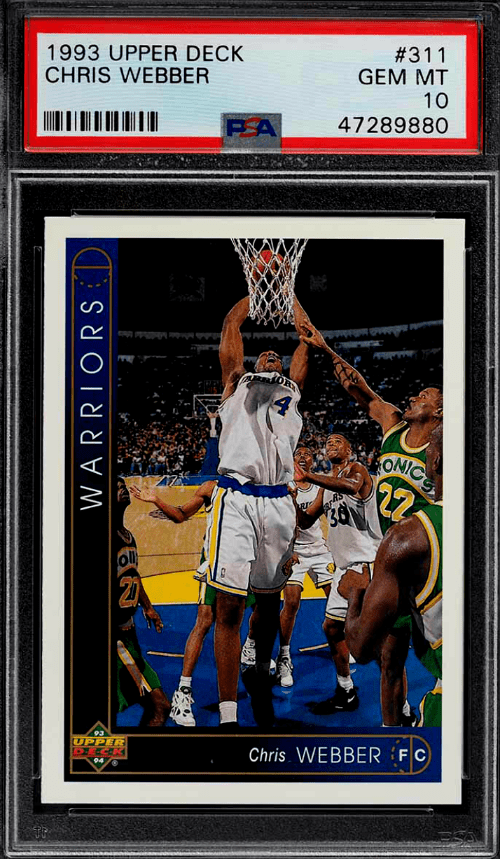 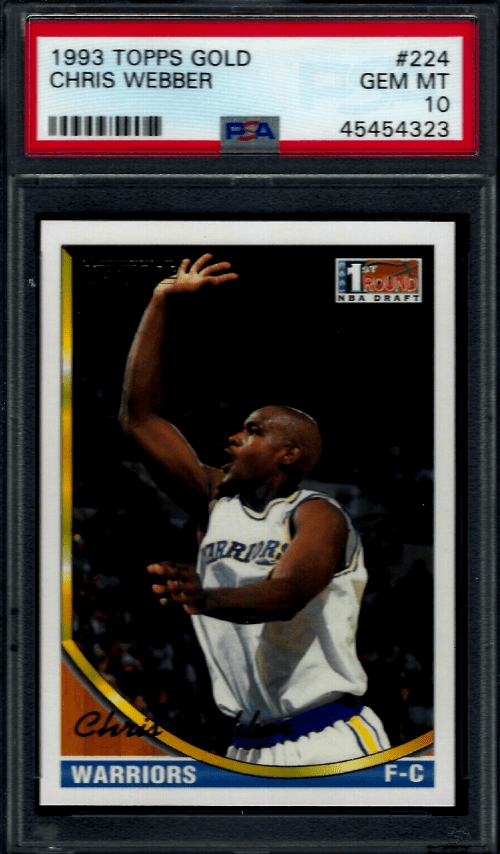 The most expensive Chris Webber rookie card is the 1993 Topps Finest Refractor #212, which will go well into the thousands.

If you want to purchase a Chris Webber rookie card but need advice, please hit us on the Gold Card Auctions Facebook Page.

Webber had a solid career, even if he never managed to win the NBA championship he so obviously coveted. Despite the great numbers, he’s yet to have made it into the Hall of Fame, despite being eligible for several ballots since he retired.

This is possibly due to injuries that hampered his progress in later years or the fact that his NCAA record was scrubbed after Webber was found to have taken money from a booster during his time with Michigan. (It’s probably more to do with the latter.)

Since his retirement, most of Webber’s cards have failed to take the world by storm, and there are several potential reasons. The majority were overproduced, so there’s no lack of PSA 10 copies today. Then there’s his omission from the Hall of Fame, which would be confusing if you were judging it purely based on the stats alone.

However, the HoF can’t hold out forever, and Webber will likely get the nod eventually. It should see prices rising, so his rookie cards could be an excellent mid-term investment if you’re willing to wait for The Naismith Memorial to change its mind.