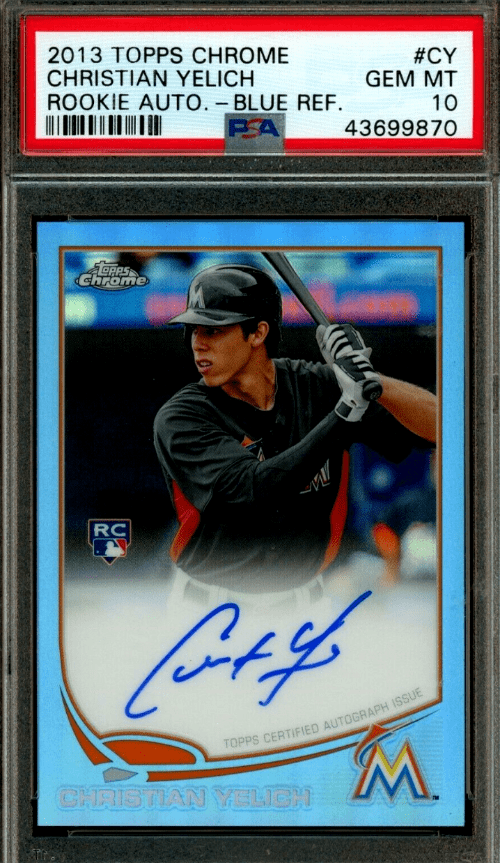 He has always been able to hit for a ton of average (never batted below .282) but the POWER has not developed until recently… but once it DID… holy smokes this kid can ball.

2018 was his power breakout season when he jack 36 homers to go along with a mind-blowing .326 batting average… BOOM GOES THE DYNAMITE!… not surprisingly he won the NL MVP that year as well.

We would like to see his post-season performance improve, however, as he is batting only .194 through 10 post-season games. If he can get his playoff numbers up and be responsible for a deep playoff run by the Brewers his RC value would really take off.

Without further ado, let’s check out the top Christian Yelich RC from an investment standpoint. 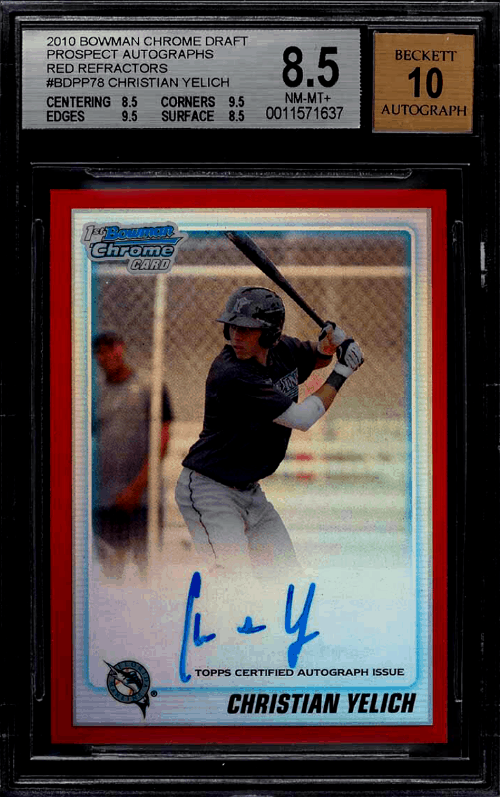 2010?!? Wow, that is a long, LONG time ago… surprising a Yelich card was made back then but we regress.

Numbered #BDPP78 the card shows Yelich at-bat in his black Marlins uniform. His name is detailed at the bottom right of the card while the Miami Marlins logo is placed in the bottom left… his signature appears towards the center middle.

The 1st Bowman Chrome Card logo is placed in the upper left-hand corner… our 2nd pick in terms of Christian Yelich rookie cards. 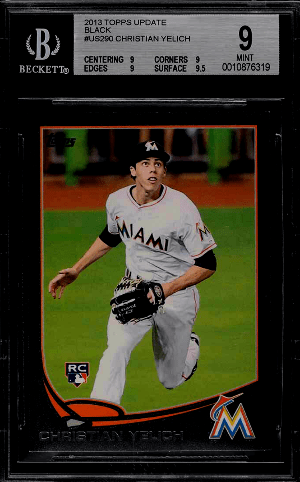 Topps has 2 out of the 3 Yelich rookie cards on our big board.

The 2013 Yelich Topps Update RC is numbered #US290 and shows Yelich on the run in an attempt to catch a pop up to the outfield… a so so looking card that depicts the Marlins M logo in the bottom right of the card and his name in the bottom left. The Topps RC logo is slabbed above his name.

We saved the best for last. The 2013 Topps Chrome Yelich rookie card is our top pick and is a hot looking card.

His name is in the bottom left, team logo in the bottom right and his autograph is placed at the center bottom… great looking card at high-end parallels (the blue refractor above is mouth-watering). 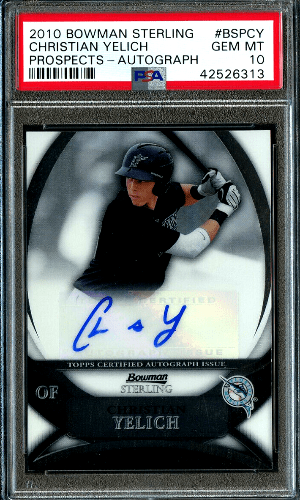 Yelich RCs are valued about right based upon his career numbers to date. If he can have greater post-season success while putting up big numbers they should increase in value greatly… BUT… we don’t see that happening with the Brewers as they just seem to have terrible luck in the playoffs.

Nervous about buying a high-end Yelich RC and want some advice. Email us at advice@goldcardauctions.com and we will provide advice. 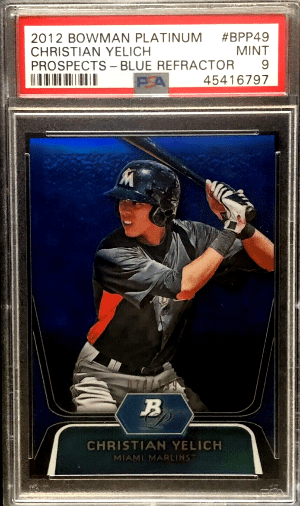 If Christian Yelich played for the New York Yankees or the LA Dodgers his RCs would be twice as popular as they are now and would be worth a significant amount more… unfortunately, he is stuck in Milwaukee where his hopes of winning a World Series are not that great… they just seem to have horrible luck when it comes to post-season baseball play.

It also took him quite a few years before he started putting up those power numbers to go with that high-average… that also hampers the value of his rookie cards.

Having said that we are buyers of his rookie card, just not many of them. Pick out one maybe two at high grades and move on to a more exciting player (Acuna Jr. or Luis Robert would be a could bet)… cheers!