Christian McCaffrey’s rookie cards have yet to explode in value as his teams have been so bad. If McCaffrey can at some point lead the Panthers to a playoff experience his rookie cards should, at the minimum, double in value. 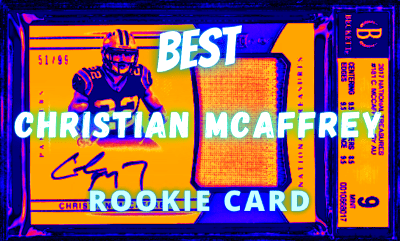 Christian McCaffrey (06/07/96) is a running back who plays for the Carolina Panthers.

He was the eighth pick in the 2017 NFL draft and went on to have a hell of a second season as he broke a variety of attacking records with his struggling side in 2018.

Here’s the lowdown if you’re looking to invest in one of his rookie cards. The most expensive card is the National Treasures RPA while the top-rated card for everyday buyers is the Prizm. 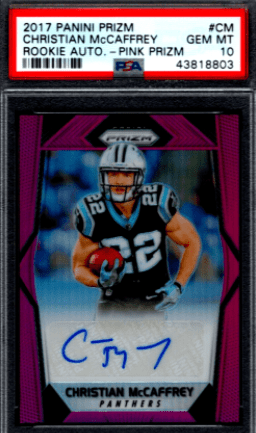 Numbered #249 the card shows McCaffrey running with the football with a glazed-over look on his face that seems to say what in the world am I doing here.

His name (Christian McCaffrey) is centered at the bottom of the card along with the team name (Panthers). 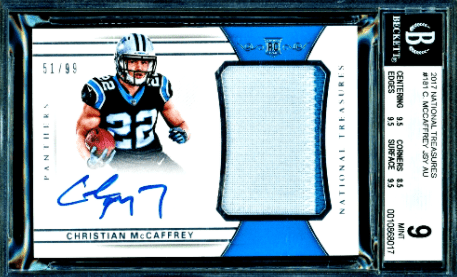 Patches are generally a good investment, and McCaffrey’s are no different. This landscape card has an image of the player located on the left-hand side, with his autograph underneath.

Related: Why are National Treasure Cards so Expensive?

The patch itself takes up the right of the card, which has a blue and white background. It’s a clean card, and the reverse has a short write-up discussing a few of his record-breaking achievements. A mint version will go for at least $200, and it’ll only go up in price if he continues to be successful. 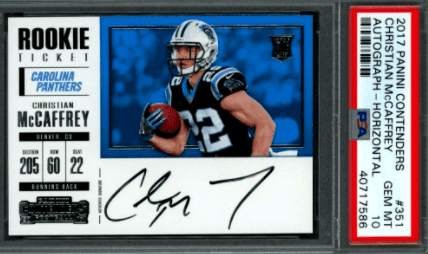 We love this card for football card investors who can afford to shell out a few extra bucks in regards to a McCaffrey rookie card.

The card is numbered #351 and shows Christian with the pigskin in his right hand while picking his way down the field.

His autograph is placed at the bottom of the card and the Contenders Rookie Ticket Logo is placed in the top right-hand corner. 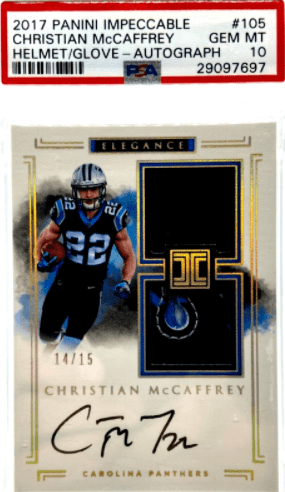 The Immaculate Collection edition is another card that you should be able to find fairly easily. There’s a bunch of parallels that decreases the overall rarity, but that does make them easier to pick up for a good price.

The base card features both a signature and a patch, while the back has information about McCaffrey’s grandfather, who set a 1956 world record in the 100-meter dash. 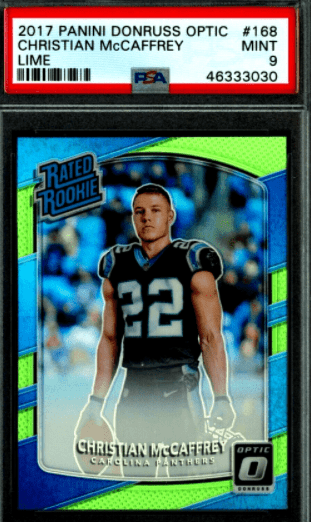 This is a solid card for investors looking to spend a smaller sum of cash but still, get access to the McCaffrey game.

These cards can cost well under $100 or well over $100 pending the version.

For the most part, the value of McCaffrey rookie cards should not see any huge spikes (up or down) over the upcoming years and should steadily rise as long as he keeps up the hustle.

Two items that could cause a spike are a Super Bowl Win or an NFL MVP.

If you have a Christian McCaffrey rookie card and would like an estimated value please email us at minimum two photos to value@goldcardauctions.com.

Christian McCaffrey was already touted as a future star when he was drafted as the 8th first-round pick in 2017.

He went on to have an incredible second season despite the Panthers’ poor form, becoming one of the best offensive players in the NFL.

He broke their record for yards from scrimmage in a single season and looks likely to have another good year in 2020.

From an investment perspective, it’s a tough one. McCaffrey is one of the best running backs in the NFL, but his team tends to lose more often than not.

It’s reflected in the pricing of his rookie cards, which haven’t exploded as of yet but very well could with a playoff appearance lead by McCaffrey.