Chris Paul (6/5/85) is a ten-time All-Star and two-time Olympic Gold medalist who is currently signed with the Oklahoma City Thunder.

Paul is one of the most recognizable players in the game, with an extensive list of rookie cards to choose from. Here’s a checklist, three of his best cards to look out for, and investment advice for the future. 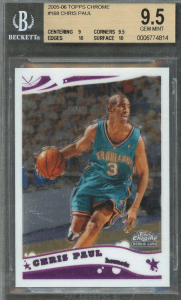 The Topps Chrome is a popular card, with a blue refractor version recently attracting almost 50 bids and a price of $282. It features Paul mid-dribble, while the reverse notes;

“With Speedy Claxton ailing, Chris had ample opportunity to start at the point for the Hornets in his first preseason. As an All-American at Wake Forest, he was known to move the ball quickly, although his pro teammates sometimes seemed surprised by the ball in early games. “He knows how to run a team, “ said Atlanta’s Joe Johnson after one contest. “He does a lot of good things for their ballclub.” 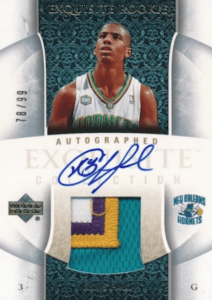 A signature and a jersey patch raise the value of his UD Exquisite Collection card, which goes for roughly $500. It has an on-card signature, while the green and black background gives it a premium feel. The reverse has a guarantee in terms of the authenticity of the patch and the autograph.

Check out other NBA rookie cards! 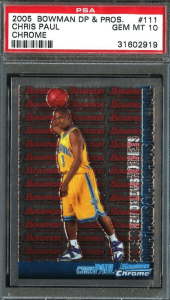 His Bowman Chrome card might not have an autograph or a patch, but that hasn’t stopped it from becoming another option worth keeping an eye on. The most affordable on the list, a  BGS 9.5 recently sold for $153. The reverse reads;

“Rewind: Named First Team AP All-American as a sophomore… Had a 27-point game against UNC and totaled 50 in two games vs. Duke last year… Was the 2003-04 ACC Rookie of the Year.

Inside Track: Paul scored 61 in a high school game, missing a final free throw intentionally just days after his grandfather was killed at age 61.”

Paul is already a living legend, slowly entering the twilight of his career. Regardless, he made the All-Star team for the tenth time in 2020, and scored a season-high 31 points in February of the same year. He still has a little left in the tank, as well as a near-guaranteed spot in the Hall of Fame to look forward to.