Chris Mullin (07/30/63) is a retired shooting guard and small forward who was drafted by the Golden State Warriors (7th overall) in 1985. A five-time All-Star, he won gold medals in both the 1984 and 1992 Olympics and was briefly the head coach of the St. John’s University men’s basketball team in later years.

From 1988 to 1992, he averaged more than 25 points per game each year, trailing behind only Michael Jordan and Karl Malone for points scored over that period. Mullin moved to the Indiana Pacers briefly in ‘97, although he returned to the Warriors in time for the 1999/00 season. An icon for the latter, he still holds the franchise record for games played with 807 in total.

Here’s everything you could possibly need to know about Chris Mullin’s rookie card, along with an investment outlook for the next few years.

There’s only one Mullin RC, so it’s not like you’re spoiled for choice.

It was released in 1986, as part of the famous Fleer set which includes Michael Jordan’s RC. A number of cards in the set also received a stickered Fleer release, but Mullin wasn’t lucky enough to be selected.

Star also released a number of cards around the same time, although once again, Mullin didn’t make the cut. This leaves us with the ‘88 Fleer, which we’ll discuss below. 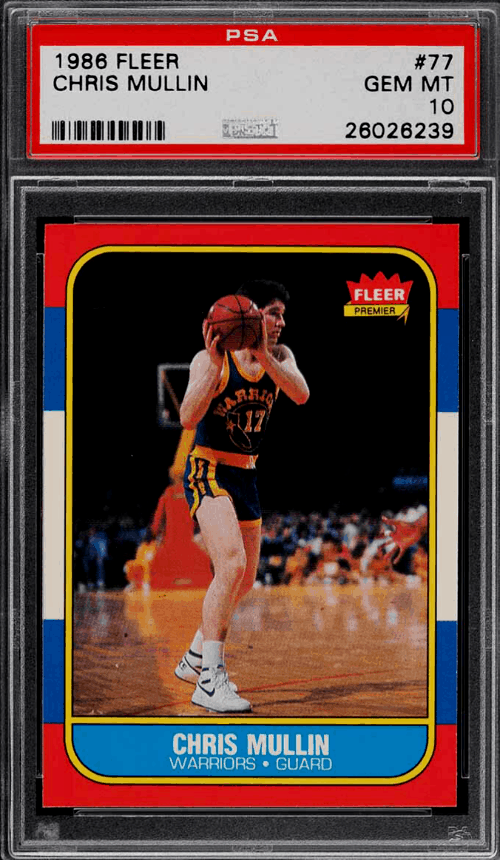 The 1986-87 Fleer is arguably the most recognizable ‘80s set in the collectible hobby, featuring some of the biggest names in basketball from the time. Mullin is featured in a strong action shot, clutching a ball with his feet planted as he looks for a pass. His face is slightly obscured, but you can still make out who it is with no issues.

The red white and blue border is iconic, but it’s also susceptible to dings, showing off any flaws instantly. It’s a trade-off, but it has led to increased prices for higher grades. The value for gem mint versions has increased rapidly over the past few years, possibly helped by the attention shown to other popular cards from the set.

The value of Chris Mullin rookie cards are similar to a boring old blue-chip stock… it will steadily rise over the years but don’t expect any major moves up or down… kinda boring but secure.

If you are thinking about buying a Chris Mullin RC but have questions please email us as advice@goldcardauctions.com and we can help.

You can also message us on the GCA Facebook Page… Holla!

Mullin might have been forgotten slightly compared to the likes of Jordan and Malone, but he’s still multiple Olympic gold medalists, and he’s been inducted into the Basketball Hall of Fame twice, once as a player and another as a member of the 1992 Dream Team. A brief stint as a coach was also pretty forgettable, while it’s not like he has a variety of RCs to choose from.

The problem is, Mullin’s card isn’t even one of the top five from the ‘86 Fleer set. Think of the best players from the 1986-87 release. Jordan, Charles Barkley, Malone, Patrick Ewing, Larry Bird, and Hakeem Olajuwon are all probably more deserving of your attention, while a number of those players have stickers from the set which are also more expensive than Mullin’s RC.

That won’t matter to the legions of Golden State Warriors fans who he wowed over the years, while it’s worth noting that Mullin’s card is valuable in its own right. (It just doesn’t compare to the more popular players from the set.)

The fact that it’s the only option is helpful as supply just about exceeds demand, while we’d look to higher PSA grades if you’re hoping to pick up a card or two as a long-term investment option.

Gem mint copies will still sell for four figures due to the condition-sensitive nature of the card, almost doubling in price over the past four years. However, values drop off drastically for PSA 9s and below.

If you’d like more choice, we’d advise to look out for one of his signed player patches from later years, although his rookie card isn’t the worst investment piece overall.