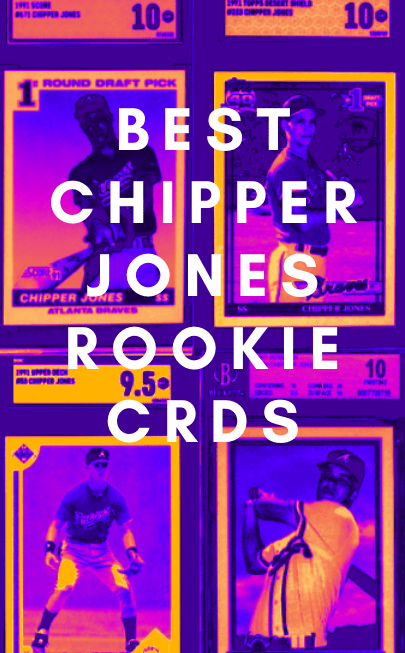 The Atlanta Braves drafted Chipper Jones with the first overall pick in the 1990 June MLB Draft as a senior in high school.

Chipper had a tremendous career with the Braves and was a fan favorite in Atlanta as he was a key member of great Braves teams of the 1990s.

Here’s a rundown with a trio of the best options and investment advice for the near future. Please note the below cards are based on return on investment. Please email info@goldcardauctions.com or visit the Gold Card Auctions Facebook page for card investing advice. 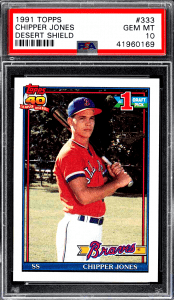 A variation of the 1991 Topps, ‘Desert Shield’ cards were given to U.S. Army personnel who served in Operation Desert Storm. The appearance is similar to the normal Topps in many respects, with an image of Jones posing with a bat slung over his shoulder.

It’s his most valuable RC by far, but why?

The key difference is a golden ‘Desert Shield’ foil emblem located on the right-hand side, while the condition of the foil, a low print run, and the fact it was given to deployed soldiers all contribute to a low number of PSA 10 graded versions on the market. 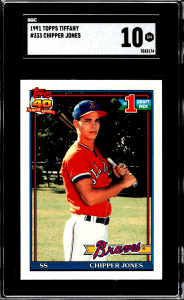 Another 1991 Topps variant, the Tiffany, is a premium version of the base card made with better stock materials and a glossy finish. (1991 was also the last year Topps released Tiffany cards, further increasing their value.)

It’s essentially the same card as the one mentioned above, with a profile image of Jones with the bat in hand. However, you’ll be able to tell the difference immediately if you hold them up side by side. Gem mint versions are reasonably valuable given the materials and the year of release. 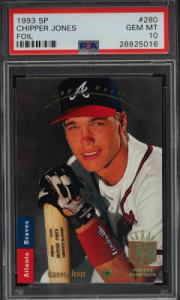 From the same set as the legendary 1993 Derek Jeter SP FOIL rookie card and as being such is sometimes overlooked by the hobby community.

But to overlook this bad boy would be a mistake as we feel the 1992 SP FOIL Chipper Jones rookie card should be one of the better of all his card in terms of long-term ROI. 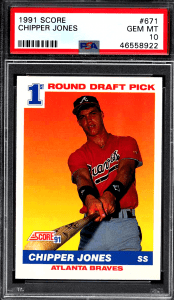 Something slightly different, the 1991 Score is worth a fraction of the price of the cards listed above, even when looking at gem mint versions.

It’s not all bad, as it makes for a great entry-level investment piece making it ideal for collectors looking to dip their toe into the baseball card investing game.

It features an image of Jones swinging a bat, with a deep orange and yellow background that is vaguely reminiscent of cards from the 1950s. It notes that he was a first draft pick, and it looks great, so why is it so cheap?

Put simply, it was overproduced, especially compared to the others listed above. 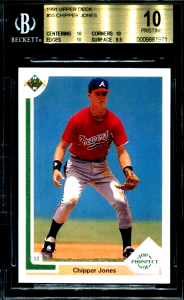 If you would like an estimated value of your Chipper Jones baseball card please email us photos to value@goldcardauctions.com.

Looking to purchase a Chipper Jones rookie card but have no idea where to begin? Email us at advice@goldcardauctions.com and we will hook you up. 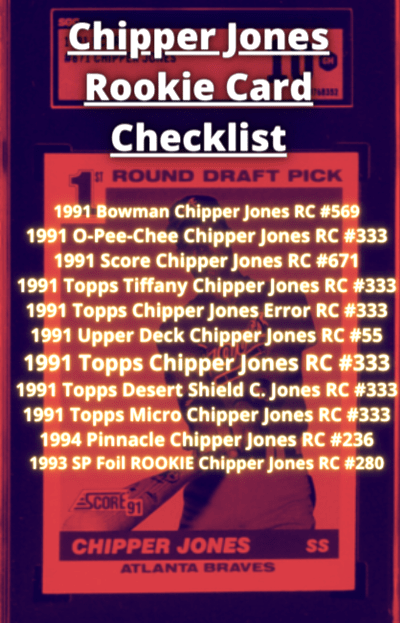 Any Braves fan will want to add Jones’ RCs to their collection, and there’s an option to suit almost every budget. After all, he spent 19 years with the team and was easily inducted into the Hall of Fame in 2018.

More recently, he joined the ESPN broadcasting team in March 2020.

Jones’ collectibles are somewhat uniquely placed, as he has a number of rare rookie options that were released in an era in which the average card was overproduced to the point of being almost worthless.

In terms of investment pieces, we’d advise you to skip past the normal 1991 Topps entirely and look to the Topps Tiffany, or even the Desert Shield if your budget permits.

The former is a rare version of a popular base card, while the latter had to go through a warzone and back before being graded.

It’s no wonder that his Desert Shield cards that have earned a PSA 10 grade can sell for over five figures, and they’re rare enough to be a good investment in the future. 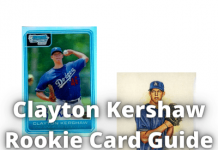