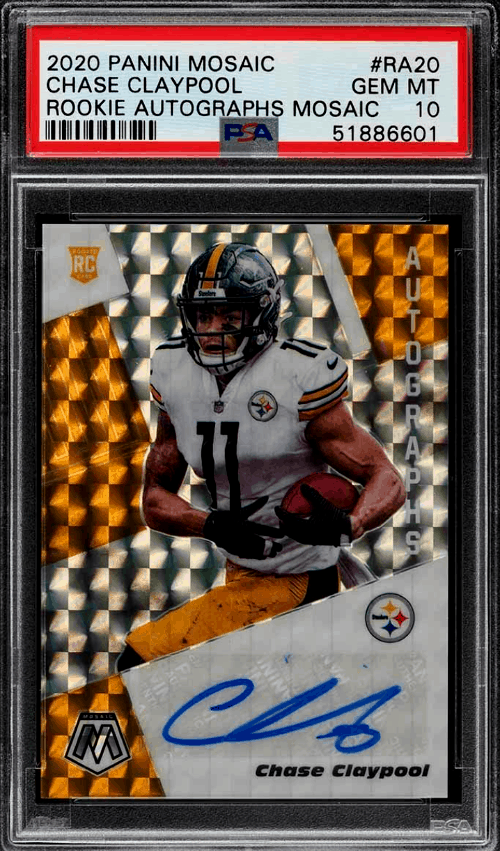 Canadian sensation Chase Claypool (07/07/98) is a WR who joined the Pittsburgh Steelers in 2020 as a second-round draft pick. He was always going to be a star, with 14 Division 1 teams attempting to sign him back in 2015.

They included top-tier powerhouses like Oregon University, University of Michigan, and Mississippi State, although he eventually committed to college football at Notre Dame.

It’s no surprise to see that his RCs are receiving a lot of recent interest, from both collectors and investors.

We’ve come up with a list containing three top Chase Claypool rookie cards, along with an investment outlook for 2021 and beyond.

From signed options to rare patches, there’s an abundance of Claypool RCs on the market.

Having narrowed it down to a handful of candidates, here’s a trio of the best cards available right now.

Please note this list will be updated as new cards are released in 2021.

The first option to make the list is found in the 2020 Panini Mosaic set.

One of the more popular Claypool RCs so far, the addition of a stickered auto at the bottom is likely to catch your eye.

It features an action shot of the player in motion, in his Steelers gear.

NFL logos are a big plus, while parallels include Gold and Black versions, which are exceptionally rare.

It might not have an on-card auto, but it’s already shooting up in value. 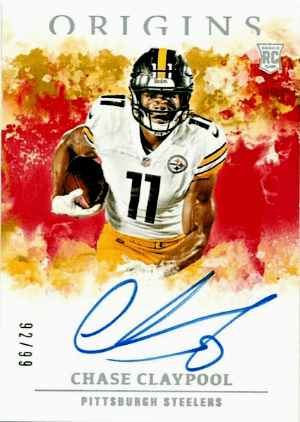 His 2020 Panini Origins RC is up next. It’s a great looking card, with an action shot of an onrushing Claypool taking center stage.

Smoke billows from the background, which has white segments at the top and the bottom.

The bottom half contains a large on-card auto-filled in blue ink, along with a serial number for parallels. The top has an ‘Origins’ logo, as well as a chrome RC logo in the top left corner. 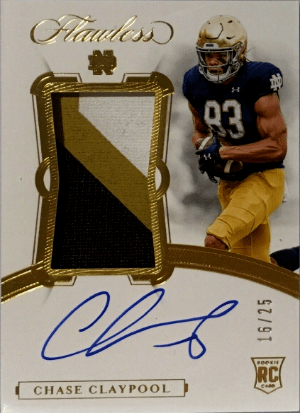 Focusing on his time spent with the Notre Dame Fighting Irish, the base version of Claypool’s 2020 Panini Flawless Rookie Patch Autographs card is limited to 25 copies.

This premium release features a player patch and an on-card auto, with the usual range of parallels on offer. (They change the color of the trim, which contrasts well against a plain white background.)

“It’s another strong Claypool RC, and possibly the best of the trio to make the list from an investment perspective…” 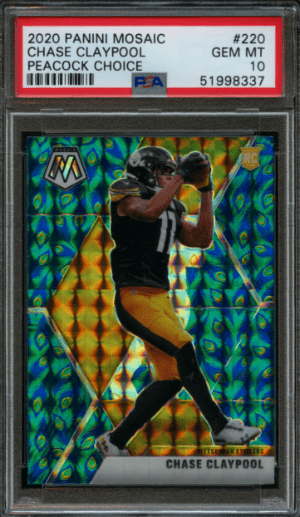 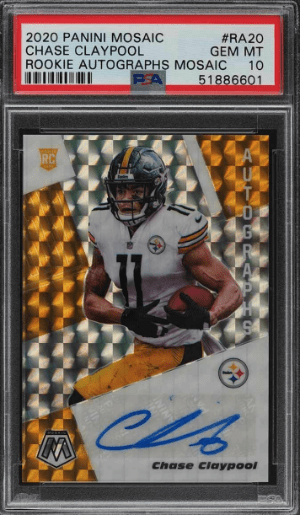 Claypool was named the AFC Offensive Player of the Week for his efforts in Week 5, and his breakout performance makes him just the third player in Steelers history to score 24 points in a game.

In November 2020, he scored 10 touchdowns, joining Green Bay’s Bill Howton (1952), Houston Oilers’ Bill Groman (1960), and Chicago’s Harlon Hill (1954) as wide receivers with the most touchdowns in their first 10 career games in the league history.

He’s only one away from the franchise record, so it’s been an incredible year so far for the rookie.

In other words, Claypool’s RCs look to be a great investment given his current form.

The same can be said for his RCs, which look to be an underrated investment option.