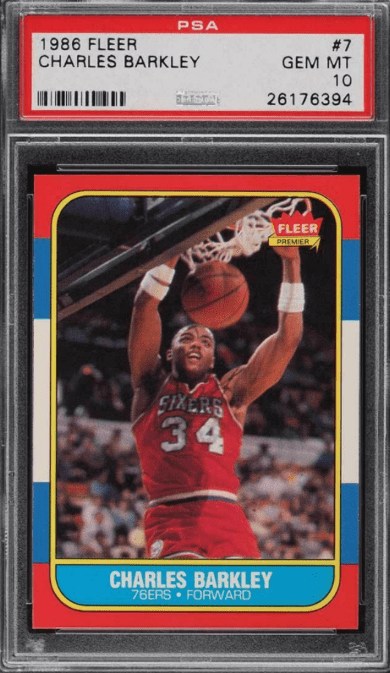 He earned 11 All-Star accolades in a row between ‘87 and ‘97, featuring for the Philadelphia 76ers, the Phoenix Suns, and the Houston Rockets respectively.

A popular analyst for Turner Sports, Barkley has continued to reinvent himself for the latest set of fans, although he’s the first to bring up his storied career when pressed for more info.

We’ve listed three of the best Charles Barkley rookie cards, with the addition of an investment report to give you a better idea of whether they’re worth checking out.

As they’re all from the mid-to-late 1980s, Charles Barkley RCs are reasonably basic, drawing inspiration from others from the era.

Here are three of the most popular rookie card options according to recent auction data via eBay. 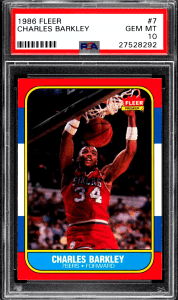 The 1986-87 Fleer Basketball is seen as the only ‘true’ Barkley rookie card, so it should definitely be on your radar!

It’s one of the most popular cards from an iconic set, even if it’s worth a fraction of the price compared to the likes of MJ or Karl Malone.

The image is a close-up action shot of Barkley dunking, in a great photo that captures his Sixers jersey, the net, and the concentration etched on his face.

Centering is the main flaw to look out for, raising the average price of high-grade versions. 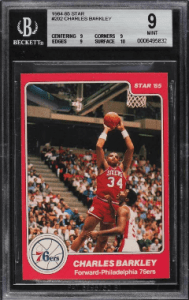 It may not be as valuable as the 1986-87 Fleer, but the 1984-85 Star is still a great option considering the lack of real RC alternatives.

It features a large image of Barkley soaring towards the net, with a solid red background and a 76ers logo at the bottom.

Once again, centering is the main flaw you’ll find because of printing errors which weren’t so widely policed back in the mid-1980s, and the background border is solid red, which unfortunately chips and shows flaws instantly.

On the other hand, these issues do make high-graded cards more enticing for potential collectors. 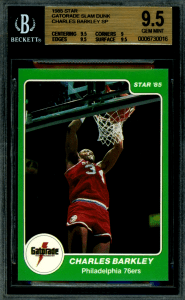 It lacks the prestige of the other two, but the 1985 Star Gatorade Slam Dunk is still worth mentioning.

The year of release shows that it’s one of the earlier Barkley cards. However, there’s no getting past the sickly border and background, which is ‘Gatorade green’ in color.

Worse still, instead of a team logo or a Star logo, they decided to add a Gatorade logo instead.

Aside from that, it’s similar in design to the other Star card listed above, while the image looks very similar to the Fleer one.

If you can get past the color scheme and the questionable design choices, it’s a unique card that mixes some of the best features of the others we’ve mentioned already. 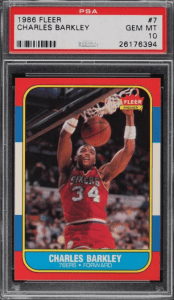 Email value@goldcardauctions.com for an estimated value of a Charles Barkley basketball card and include a minimum of 2 photos. 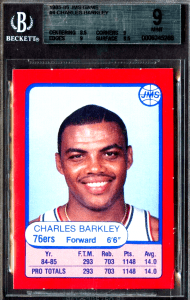 Barkley isn’t interested in being a role model, and he’s arguably better known for his role as an analyst for the newest set of NBA fans.

Regardless, he’s a well-respected Hall of Famer who headed up the Class of 2006, and he’s undoubtedly one of the best power forwards of his era.

He has a number of interesting early cards thanks to the Star editions, but the Fleer is the smartest investment if you’re hoping to make a decent ROI in the next year or so.

If you are looking at the Star card, remember that 9 grades and above will sell for four figures, making it a viable alternative if you want a solid mid-range option.

The age of the cards and their relative simplicity are significant factors in their low values, especially when compared to other big players from the era.

After all, the Fleer card is pricey, but it’s nothing compared to the Michael Jordan Card from the set.

You won’t have to spend thousands of dollars to pick up copies of Barkley’s best rookie cards, unless you want multiple versions which have achieved the highest grades possible. Given his reputation and the outspoken nature of his analysis, they seem like a good investment in the short-to-medium term.