CeeDee Lamb should be counting his lucky stars that he was drafted by the Dallas Cowboys… he will now join Dak Prescott and Ezekiel Elliot to form one of the leagues most prolific offenses!

Read on to discover the best CeeDee Lamb rookie cards for your collection. 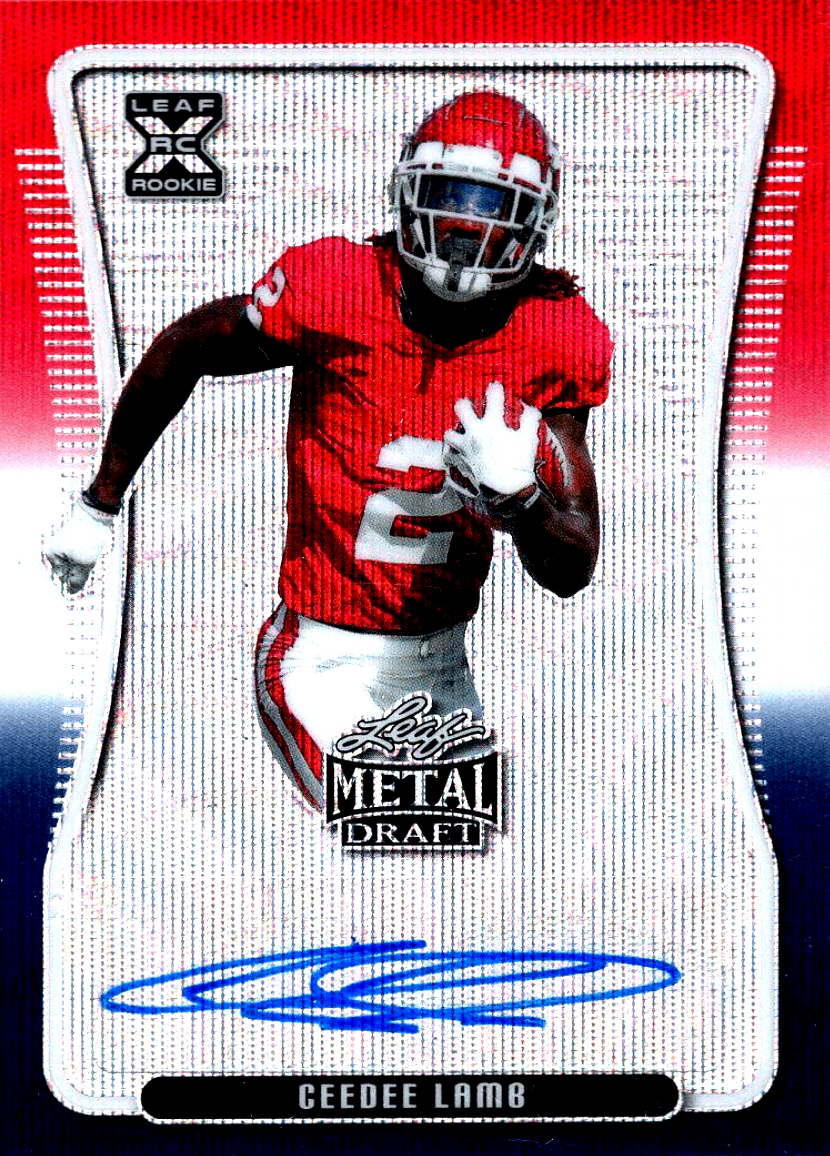 Out of all the places to land the Cowboys had to of been at the top of the list for CeeDee. Not only is Dallas close to where he played college ball and grew up (Opelousas, Louisiana) but they also have a loaded offense and a new coach in Mike Mccarthy who loves to throw the pigskin.

CeeDee Lamb is cool as a cucumber under pressure and rises to the occasion on big games. He has high-end speed and separation quickness plus the fact that he can play any of the 3 wide receiver positions which NFL teams love.

His rookie cards should flourish over the next few years as he becomes a household name in Dallas and maybe more… here are the top CeeDee Lamb football rookie cards to add to your collection. 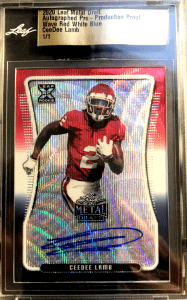 Were not usually big fans of Leaf football cards BUT we must admit this card is pretty cool and makes for a decent investment when it comes to early football card releases.

Numbered #BA-CDL the card shows CeeDee running like he just stole an Apple Pie from his down the street neighbor. The card also has a nice autograph at the bottom under CeeDee in his red Sooners #2 jersey. 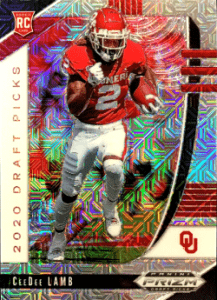 Another CeeDee Lamb rookie card worth considering if you want to jump in before the big boys are released. The 2020 Lamb Panini Draft Picks Prizm card shows Lamb with the pigskin sprinting downfield in his #2 red Sooners jersey… his body language seems to say good luck catching me suckers hehe.

Numbered #104 the reverse reads “The Red Rover Show-Down is one of college football’s most historic games. On Oct 12, 2019, Lamb made his mark on the contest, vaulting himself into prime sport in the Sooner’s folklore. While leading Oklahoma to a 34-27 victory of Texas, the superstar wideout tailed 10 receptions for 171 yards and 3 touchdowns.”

We see good things for the value of Cee Dee Lamb rookie cards over the next 3 to 5 years.

As always please email us your Cee Dee Lamb football cards along with photos to value@goldcardauctions.com to receive an estimated value of your card.

Dak Prescott to CeeDee is going to become a staple in Dallas and in our opinion, the Cowboys are primed to make a deep run into the playoffs with this offense. We could easily see CeeDee claiming rookie of the year honors and double-digit touchdowns in Dallas.

Were going to wait until a few of the more popular rookie cards are released i.e. Flawless, Prizm before buying… BUT… buying the cards shown above should result in a decent ROI in a year or two.