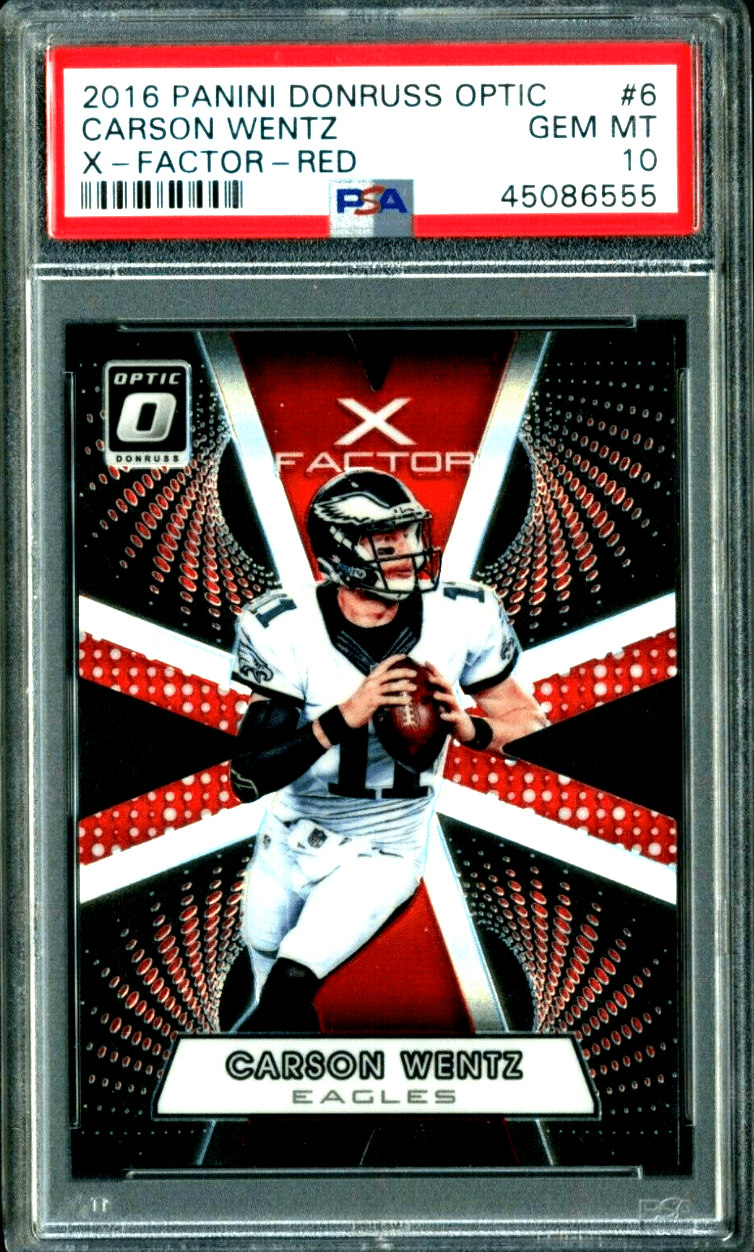 Carson Wentz (12/30/92) is a QB who currently plays for the Philadelphia Eagles, and was the second overall pick in the 2016 NFL Draft.

Wentz broke a heap of records in his rookie season and won Super Bowl LII a year after.

Investing in his rookie cards might seem like a no-brainer, but how has he fared in the last few years, and is there any potential for profit in the future?

We’ve listed three of the best Wentz rookie card options on the market, with lots of additional info and an investment report to help you make a decision.

Here are three of the most popular Wentz rookie card options according to recent auction data. 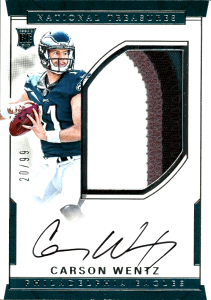 The pinnacle of Wentz’s rookie options, his 2016 Panini National Treasures regularly sells for a four-figure fee.

Despite the significant price tag, it’s one of Wentz’s most popular cards found at auction for a number of reasons.

There’s a ton of brand appeal, and the combination of a massive patch and a large autograph along the bottom is enough to get the attention of most serious collectors.

The image features Wentz preparing to throw a football, while it’s reasonably rare at 99 copies.

It also has an RC logo, and the usual range of interesting parallels. 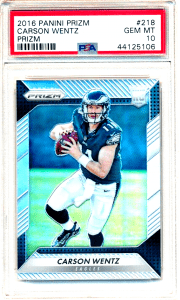 The 2016 Panini Prizm doesn’t have a patch or an on-card signature, but there’s a range of shiny refractor-like versions that bump up both the rarity and the average price.

Many have a different color design or a different background pattern, making them more interesting for would-be collectors.

The name recognition and the overall quality make it another premium option, even though a PSA 10 grade currently sells for a quarter of the price of the National Treasures card listed above. 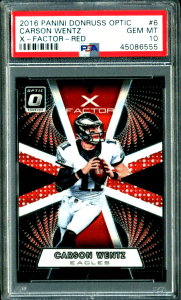 BOOM GOES THE DYNAMITE… honestly, if we’re talking bang for your buck the 2018 Went Optic X-Factor rookie cards are our pick.

Donruss is one of the most underrated companies in the hobby and they hit us hard with a great looking Wentz rookie card here.

Numbered #6 the card shows Wentz dropping back franticly looking for an open wideout or tight end. 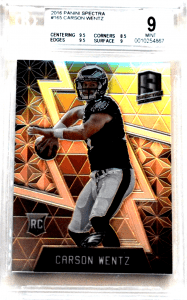 Be careful with Wentz’s Panini Spectra cards, as there are a number of different versions along with two separate base options. This includes both landscape and portrait cards, with both numbered to 99.

The signed versions are significantly more valuable, and they’re also more popular at auction. For the best possible returns, we’d recommend looking at some of the rarer parallels.

Wentz and the Eagles won Super Bowl LII over the New England Patriots 41–33, the first in franchise history. However, he tore his anterior cruciate ligament in his left knee in Week 14 that season and was replaced by Nick Foles as the starting quarterback after the playoffs. He has never really been the same since.

While his talent is never in doubt, there are obvious concerns regarding his durability. Most stem from the severe nature of his knee injury in 2017, while some critics would argue that he never really managed to find his form again upon his return. It’s reflected in his MVP odds, which lag behind the likes of Dak Prescott by a significant margin.

Check through our recent rookie card reviews to see some great options in a range of different sports, or use the search bar if you have a specific player in mind.

Send us an email or leave a comment below if you’re thinking about adding a Wentz card to your investment portfolio.