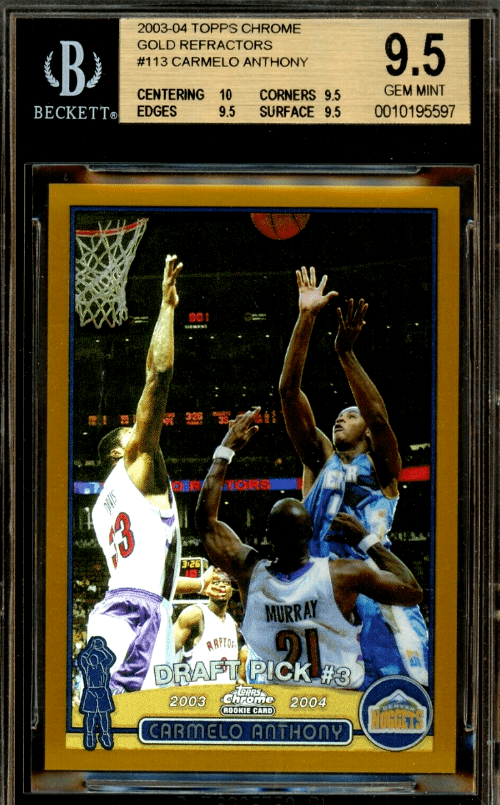 Carmelo Anthony (05/29/84) is a small forward/power forward who plays for the Portland Trail Blazers. Anthony was originally the third overall pick for the Denver Nuggets back in 2004, and he led them to the playoffs every year from ‘04 to 2010.

In later years, he turned out for the New York Knicks, the Oklahoma City Thunder, and the Houston Rockets respectively before joining the Trail Blazers in 2019.

A 10-time All-Star, Anthony was also named as the USA Basketball Male Athlete of the Year three times (2006, 2012, 2016), was the NBA scoring champion in 2013, and played in the Olympics for the US national team a record four times, winning a trio of Gold medals along with a bronze.

But do his rookie cards match up to his illustrious CV? Here’s everything you need to know about Anthony Carmelo’s top RC options, as well as investment advice for the next few years during a key stage of his career.

The early 2000s saw a variety of rookie card releases for the average player, with Anthony having 62 to choose from. That means that there is something to fit every budget, but which cards make for the best rookie card investment options overall?

We’ve looked through recent auction data to bring you a list with three top Carmelo Anthony rookie cards on the market right now.

The base version of the 2003-04 Topps Chrome card is plentiful, which is why we’d recommend checking out either of the Gold Refractor versions if you’re looking for the very best investment pieces. It features a great action shot of Anthony battling for a loose basketball, with the border colored to match the parallel.

It notes he was ‘Draft Pick #3’, with the addition of a team logo found on the bottom right corner. Any of the serial numbered Refractor parallels are popular at auction, so be on the lookout for gem mint copies. 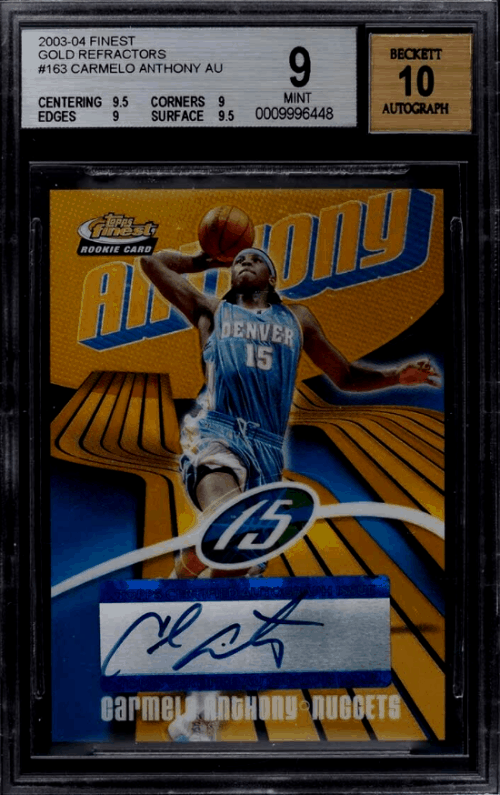 The second RC to make our list is Anthony’s Topps Finest. Featuring a shot of the player attempting a dunk, the Refractors are particularly eye-catching, with his surname emblazoned in large letters behind him. There’s a curved background with no hard border, while the addition of a stickered autograph is tempting for many collectors.

Base versions are fairly affordable, but it’s still an RC with auto, so it’s extremely condition-sensitive, which adds to the price when looking at graded copies. As with the card above, the Refractor parallels are extremely valuable, especially when compared to the base version. 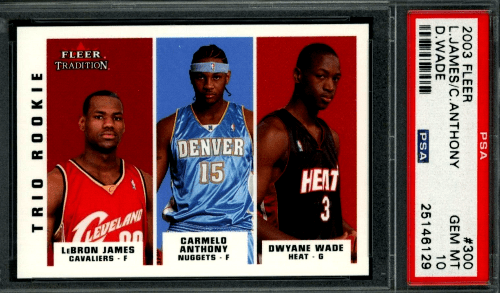 This ‘Trio Rookie’ card makes good use of the strong rookie class of 03-04. As well as Anthony, Lebron James, and Dwyane Wade make up this landscape design, with a small section devoted to each player. Anthony is in the middle, with the cool blue of his Denver jersey contrasting well with the two red backgrounds found either side.

With three future Hall of Famers, it’s easy to see how this card could potentially go up in value over the next few years, while it’s another popular option whenever it comes up at auction.

Anthony has had a tough time in recent years. He was called selfish and lazy, while it got to the point where he was waived by the Houston Rockets 10 games into the 2018-19 season.

It looked like it could be time for an enforced retirement. Instead, Portland took a chance on the future Hall of Famer, and he looks ready to make every other team pay for turning him down as he continues to show that he still has what it takes to make an impact in the NBA.

He’s never struggled to hit decent numbers, it’s just that the team’s surrounding him have been ever so slightly lacking in some respects. It’s one explanation for why his rookie card prices are lower than you might expect, especially when considering Anthony’s obvious talents.

He might be getting older, but “Skinny Melo” made a return following a switch back to small forward for Portland. While many athletes took time off during the lockdown, Anthony is in the best shape of his life and hopes that focusing on fitness will go some way to stave off injuries in the twilight of his career. (He was plagued with problems during 2015, which ended with season-ending left knee surgery.)

With 62 Melo RCs on the market, there are a number of decent options that could provide owners with a good ROI if you’re looking for long-term investment while you wait for his inevitable retirement. Any of the cards we’ve listed above are likely to rise in price over the coming years, while he’s still recording decent numbers for Portland on his revenge tour.

How much is a Carmelo Anthony card worth?

Which LeBron James rookie card is worth the most?

How much is a Dwyane Wade rookie card worth?

What is Carmelo Anthony's rookie card?