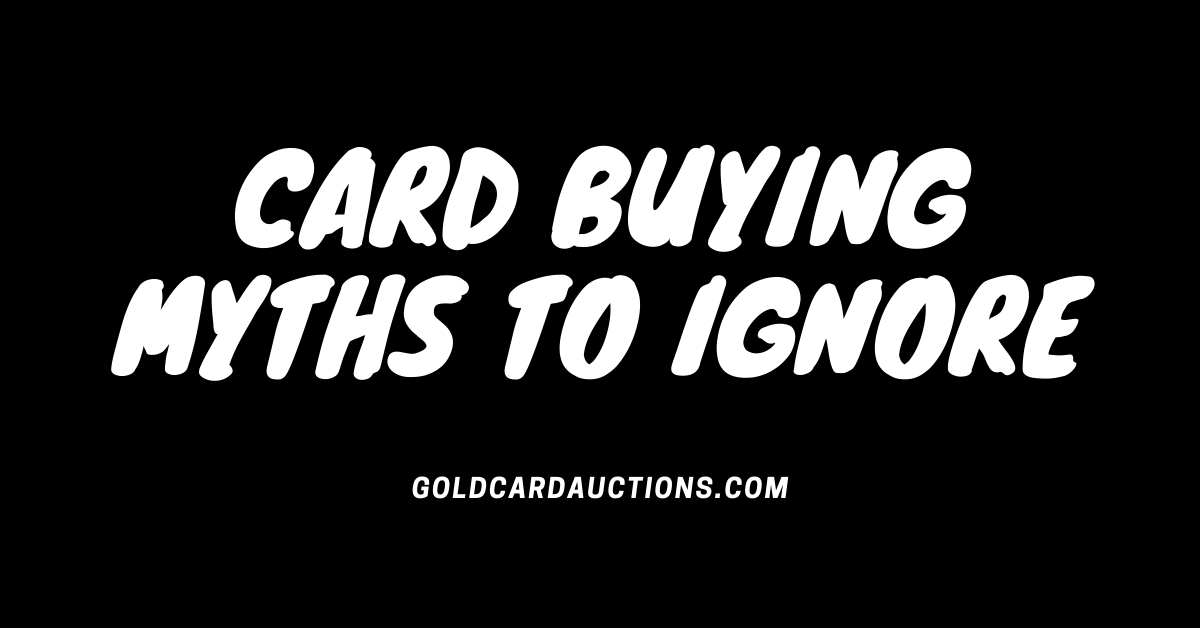 Investing in sports cards (and or trading cards) is not easy.

A lot of research goes into it, from research and knowledge to timing and skill.

Both bravery and luck have something to do with it as well.

Card investing is not a ‘get rich quick scheme,’ nor a ‘buy low, sell high’ simple setup where anybody can make money (although certain in-depth strategies can be extremely profitable, even in the short-term that’s another topic).

MUST READ: 22 Tips and How-To Profit In Sports Cards

It’s a calculated business strategy where you have to know specific inside information that will go unnoticed.

Look out for critical things like the player’s age, the team he’s on, what position he plays, and how well he has played. Is he a rookie or an O.G. player?

There are so many factors to keep in mind, and these are just a few of them.

This website, GoldCardAuctions.com, has got you covered with all the detailed information as we provide articles guiding you to invest in who, what, and when.

Generally, the rules are consistent.

However, sometimes it varies depending on how the player is playing at the moment. Another notion is whether he’s a Rookie or not.

Yet, there is a lot of clashing advice and varying opinions online that leaves us conflicted in the end with no straight-up answers.

The main point is to break down the most common myths.

If not, then unwritten rules of baseball card investing that might not always be correct.

Please note: We will use baseball cards as an example but the same theories apply to all sports cards and most trading cards. God Bless and Enjoy.

Write these down, memorize them, or bookmark this page but do whatever it takes to follow these busted myths as it will increase your sports card buying ROI over the long-term no doubt.

Across the board, this is the most misinterpreted investment advice and misguided myth ever!

This myth is mainly true, YET; if you follow this general advice, solely you will surely miss out on a spectacular player and an excellent investment.

So for that reason, do invest in particular pitchers.

First, you have to look at the 2019 Major League Baseball (MLB) season, as it’s a new classic collector’s holy grail if you will.

During that time, people noticed that Justin was about to hit many milestones.

Fourteen of those are in the Hall Of Fame (HOF).

In contrast, the other two, C.C. Sabathia, and Verlander are not yet eligible due to several reasons. Sabathia’s age and Verlander’s Tommy John surgery.

If you look at history, there’s Denton True “Cy” Young, and he was a phenomenal pitcher, no-hitter, and his rookie card prices soared.

In addition to that, Max Scherzer became the 19th pitcher in history to reach 3000 strikeouts, so who will follow his suit.

Therefore, pitchers’ cards can become national treasures that happen to be highly lucrative.

However, these are extreme exceptions, yet don’t avoid investing in pitchers, as you may miss out on massive profits.

Population reports, or ‘pop reports,’ are a semi-accurate representation of how many copies of a specific card exist in a particular grade.

For example, according to the PSA authentication grading services website, there are only 31 Fernando Tatis Jr. cards with varying graded levels in 2021.

There are numerous reasons why you should look at this pop report objectively and tentatively invest.

This number does not include Beckett Grading Services (BGS) or any other company’s graded cards.

Also, it does not have any Professional Sports Authenticator (PSA) graded cards, as 8s or 9s.

This reason excludes raw, ungraded copies of the card and resubbed cards.

Remember that resubbed cards are cards submitted to PSA to be graded, cracked out of the slab, and then resubmitted to get them to transform to a higher grade.

The pop reports do not accurately represent what exact amount of a particular card exists.

There is a vast difference in value between the card mentioned above, PSA 9, and a PSA 10.

Sometimes, a nine could become a ten if you know the player’s current career status, so resubmitting could probably make a $2000 profit.

On the other hand, if you don’t see that card’s worth and keep sending it with the same results, that card would only lose its current value.

Only resubmit if you feel the card is severely under-graded because cracking out open a card will cause the card to not be in gem mint condition.

Therefore, it is best to keep the integrity that belongs to the card and know its unique value beforehand.

Don’t mindlessly follow pop reports stating what cards are worth investing your money in. Always know who is an excellent player card worth buying before you do.

If you know the ‘it card’ of one of the best players in the game, demand meets and surpasses supply, regardless of the reserve on hand.

However, it is generally worth investing in limited-edition cards, as the price goes down if the card’s familiarity and if it’s easy to come across.

Baseball cards are not a bad investment if you know what to look for in them.

They don’t lose value over time.

They gain even more credibility, as it’s all about scarcity and exclusivity when it comes to rare cards that are hard to come across.

Aside from that matter, the player’s game history and current career are crucial things to consider.

Cards are not only a collector’s item but also a stock investment item as well. Collecting cards is a great hobby that makes money.

Only if you have some knowledge of the 20-something-year-old baseball players, or you will lose money.

Many people assume no money to be made in baseball card investing because they’re simply looking for a get-rich-quick scheme or a passive income stream.

This myth fails to see that baseball card investment requires much work, patience, commitment, and genuine interest in the game.

It requires investing long-term in a player versus a short-term flip or commodity because baseball ranking is significantly different than other games.

Freddie Freeman of the Atlanta Braves just became a World Series Champ which means his value will continue to climb off the charts.

You can make money in long-term investing, but it requires some effort. Like you can fish if you figure it out. It’s a fallacy to say you can’t because it’s not easy.

That’s why people hold on to cards like Derek Jeter’s card or Mike Trout’s card for a decade, waiting for the highest value they can earn back from it.

The recommended advice is not to wait two decades.

You have to strike while the iron is hot and there is a peaked interest in the player.

It’s no good if he’s in retirement and a new rookie is all the rage right now.

Consider the opportunity cost and the compound interest rates you’re missing out on by holding on to those baseball cards for many pointless years.

Invest that $150 into another card and resell it for more, rinse and repeat.

If you’re patient to stick with it, wait five years and sell that same baseball card for $300, if not more.

Think of whose portfolio might outpace the Dow Jones Industrial Average report, or simply the DOW, by countless amounts.

In a nutshell, you can make money and lots of it by investing in baseball cards, but only if you know the game and the players well.

You will need to know the business inside and out of the box scores, historical data, and status lines for every comprehendible occurrence.

It can go both ways in opposite directions, be it a world championship or 3000 strikeouts or simply an injury or retirement.

Sometimes a player has a season where he doesn’t play well like he used to – it happens. However, if you invest in that baseball card, you will lose big bucks.

If a player pops for performance-enhancing drugs (PEDs), you will lose a lot of money.

So, have an eye for these things because they matter in the long run as to who you decide early on who is worth investing time in and putting your money on.

If this still sounds manageable and you wholeheartedly believe you can handle it, then welcome to the wonderful world of baseball card investing!