After spending his college career with the Auburn Tigers, Newton was drafted as the first overall pick of the 2011 NFL draft by the Carolina Panthers. C

am would send 9 years at the Panthers with mixed levels of success before moving on to the New England Patriots in 2020.

During his time with the Panthers, Cam led the Panthers to the playoffs on 4 occasions with the 2015 run culminating in an appearance in Super Bowl 50. They would go on to lose the Super Bowl 24-10 to the Denver Broncos, but Cam Newton was named the NFL MVP that season anyway.

Newton also has 3 Pro Bowl appearances to his name, won the NFL rookie of the year award in 2011, and was awarded the highly coveted Heisman Trophy after his senior year at Auburn.

Newton’s rookie year was as successful as he ever could have hoped it would be. Cam immediately took over the starting QB role from Jimmy Clausen and improved on the Panthers terrible 2-14 record in 2010 to go a vastly improved 6-10 in 2011.

Newton went on to start 16 of 16 that season, throwing for a massive 4,051 yards, which remains his NFL career-high to this day, and 21 touchdowns. Known for being a quarterback who is not afraid to take the ball on himself and run with it, Newton also rushed for 706 yards and a career-high 14 touchdowns. He would end the season with a passer rating of 84.5.

The hype around Newton going into his rookie year was huge, so there were plenty of cards produced and therefore plenty to chose from. His successful year and career since have ensured that the values of the best cards can be very high. 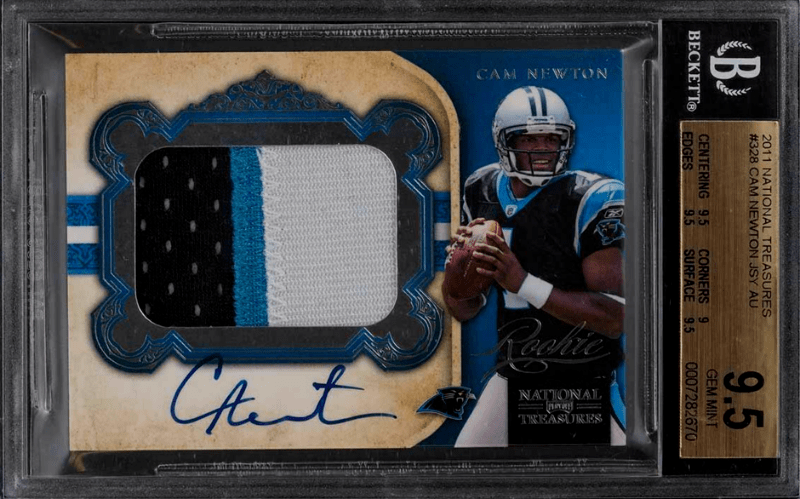 Outside of rarer 1/1 inserts or parallels of certain cards, this is by far the most expensive and most sought-after Cam Newton Rookie card on the market.

One of the main reasons for that is because it just looks great with the big patch framed on the left of the horizontally printed card just above the on-card autograph. Cam Newton is pictured in full Panthers uniform on the right of the card in mid-flow and is on a blue background. The patch frame has Panthers-blue outlining and is set on a beige background.

The base version of this card had a very limited print run with just 99 copies produced and so it does not show up at auction very often in gem mint 10 conditions. When it does it is valued by PSA at around $1500 and has previously been sold for as high as $2200. When the card is graded 9 it will set you back around $1000 and a near mint card will cost around $600.

There are also some rarer parallels released with more limited print runs that will likely cost a lot more if they ever show up at auction. 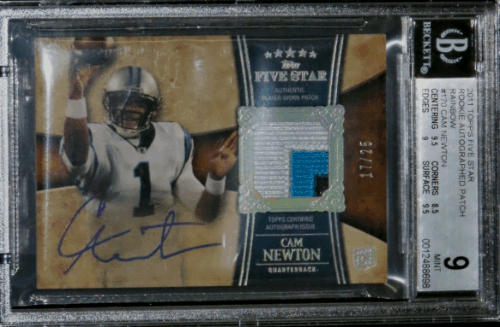 This card actually has a very similar feel to it as the National Treasures card, with the beige and blue color scheme being pretty much the same. It is another horizontally printed card, but this time with Newton to the left throwing the ball just above the on-card autograph. The patch is considerably smaller and to the right, framed in typical Five Star fashion in a silver frame on a blue background.

This also translates as you would expect into a slightly lower valuation than some of Newtons’ most popular RC cards.

In graded gem mint 10 condition, the card can sell for somewhere in the region of $200 to $250, whereas ungraded it can usually be picked up for somewhere between $80 and $100. There is also a similar card that does not feature the patch which is equally as nice but a lot cheaper so a great option for all collectors. 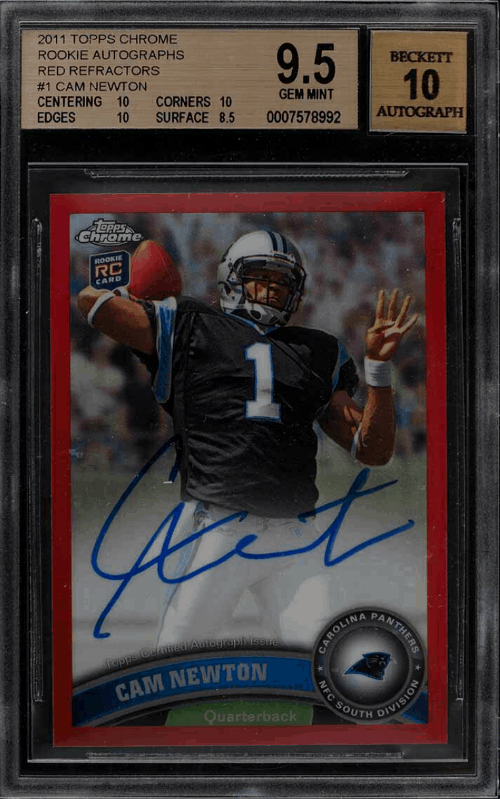 Topps Chrome is the set that all collectors want and as there is every year, there is an extensive list of parallels and inserts for this card. The card features an almost full-body picture of Newton pulling back to throw, with a faded white patch at the bottom to make room for the on-card autograph.

This red parallel is distinguished from its counterparts by the thin red border around the outside of the card.

This parallel had a print run of just 5 and is therefore an extremely rare find. The highest graded card is a PSA 9.5 which recently sold on eBay for just over $3000.

The extensive list of parallels means that whatever level of collector you are there is a card in this set for you. The base autographed cards are valued at somewhere in the $500 range and the unsigned base at just under that. 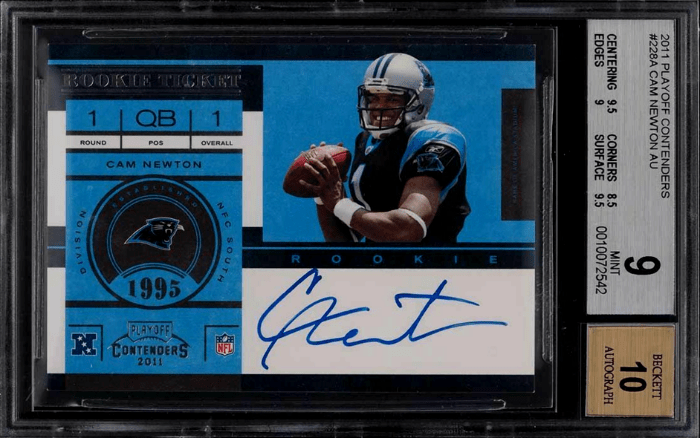 This is an extremely good-looking card. It is horizontally printed and heavily features the Panther’s primary blue color as the main color on the card which is a nice touch. The left-hand side has the ‘rookie ticket’ which states that Newton was the first overall pick for the Panthers in the 2011 draft, and the upper right shows him in full Carolina uniform. The bottom right features a white box with Newton’s autograph in it.

This card is the only one without a serial number to come anywhere near making this list and has by far the longest print run. However, the fact that it’s a rookie only set has given it great popularity with collectors over the years and that ‘Playoff Contenders’ brand name takes the valuation up a level.

In gem mint 10 condition this card is valued at around $750 which is extremely high considering the lack of serial number. In mint 9 it can be picked up for around $300 whilst in the lower condition, it can be purchased for less than $75.

There is apparently also a very subtly different and rarer version of this card that is identical but removes the armband by Cam’s left elbow, so keep your eye out for that one.

Trading card companies really pulled it out of the bag with Newton RC’s, with this being another great-looking card. This one is a lot more simplistic than some of its counterparts, featuring the silhouette of Cam as the main attraction in the middle of the card. The silhouette splits the patch into two halves and the autograph is on top of the faded ‘rookie’ word at the bottom. The brown royal-looking detailing fits in well with the theme of the card.

This card had a print run of 199 so is rare enough to hold a higher value, but not so rare that it is hard to find online. In gem mint 10 conditions they are valued somewhere around the $400 mark whilst in less than mint condition, it can often be purchased for around the $50. 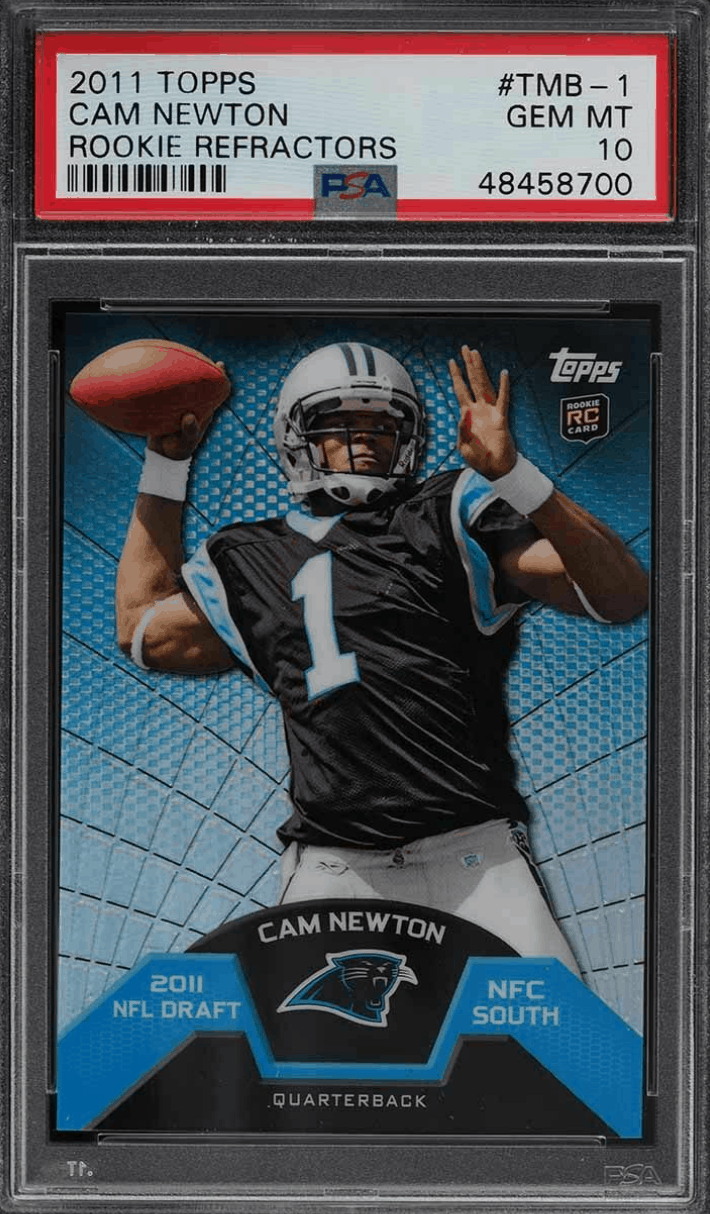 The most expensive Cam Newton rookie card is the 2011 National Treasures RPA #328… this bad boy sold for a little more than $5k in September of 2020.

Looking to buy a Cam the Scam rookie card but need help… we got ya covered… email us at advice@goldcardauctions.com or hit us up on the Gold Card Auctions FB page.

Newton’s career so far has been good but not special and he is therefore in no way currently guaranteed a spot in the Pro Football Hall of Fame. To have this honor bestowed upon him, the quarterback probably needs to achieve more between now and the end of his career.

Therefore, the investment outlook on Cam Newton’s rookie cards depends a lot on how his time with the Patriots goes over the next few seasons. Newton has had a decent but unremarkable start to his Patriots career and if he and Bill Belichick manage to form a relationship anywhere near the one the head coach had with Tom Brady, then they are almost guaranteed to have some deep playoff runs.

This would enhance Newtons’ reputation and put him nearer to that Hall of Fame spot and would have a great impact on the value of his rookie cards. However, if this does not happen Newton could see himself replaced at the Patriots relatively soon which would damage his reputation and have a negative impact on his rookie card value. 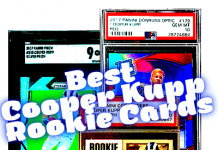