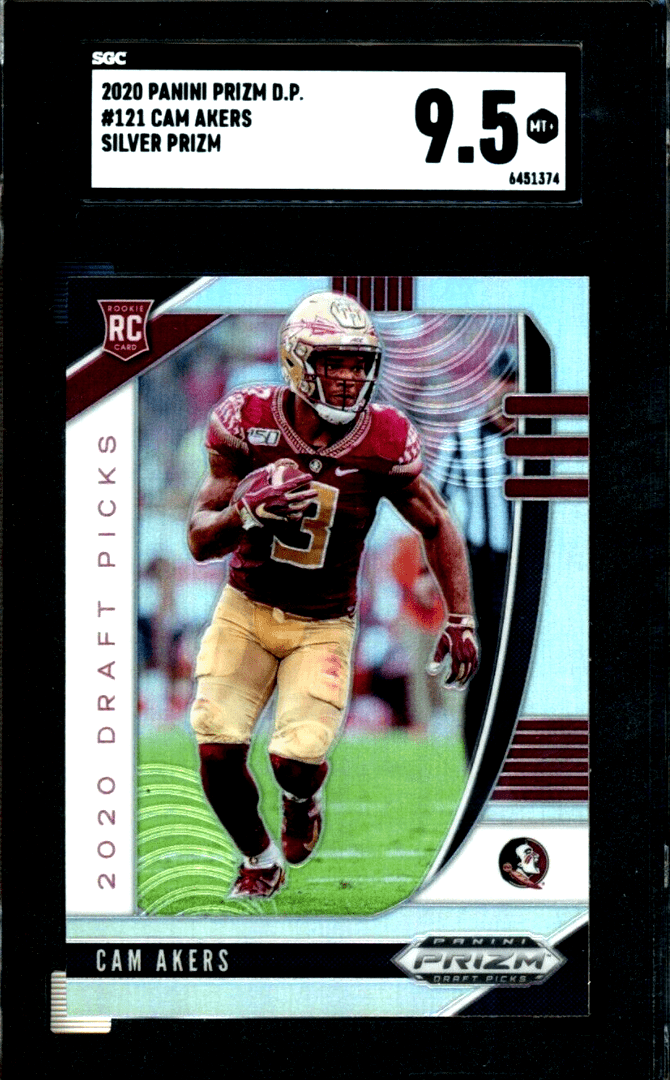 Cam Akers (06/22/99) is a running back who joined the Los Angeles Rams as a second-round selection (52nd overall) in the 2020 NFL Draft. Considered to be one of the top prospects in college football when he signed with Florida State, he set the freshman record for rushing yards during the 2017 Independence Bowl.

Here’s a roundup with three of the best Akers RCs, with card info, investment prospects, and everything else you could possibly need to know.

We’ve looked at recent auction data which helped us to identify three of the top Cam Akers rookie card options which are available on the market right now. All three were produced by Panini, and they’ve been listed in order of the number of bids they receive at auction.

The 2020 Panini Prizm Draft Picks is the latest release in the eye-catching set. I’m not the biggest fan of the 2020 design personally, but it’s clear that collectors value the brand recognition and the low serial numbered options, as well as the signed Prizm cards on offer.

It features an image of Akers in full sprint, with the ball clutched tightly in his right hand. There’s a couple of image variations to choose from, and they all feature him in motion on the field. The Gold Ice version is the one we’d look out for, as it already commands a decent price at auction. 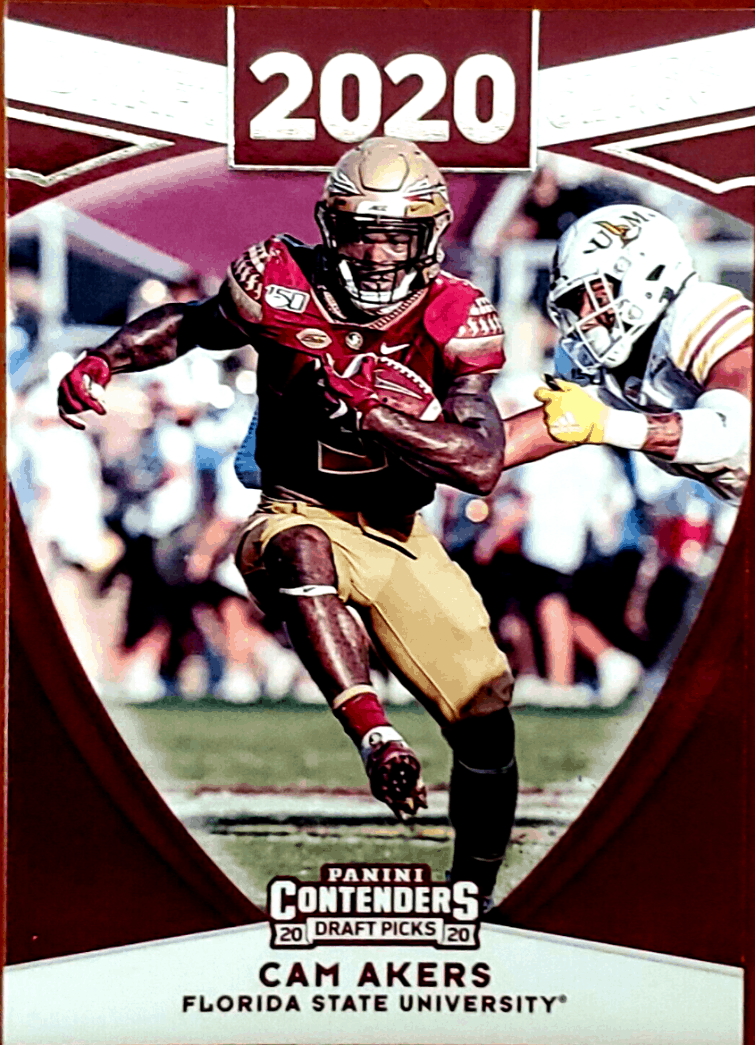 Another solid Panini card, Akers’ 2020 Contenders should also be on your radar if you’re on the lookout for a good investment piece. There’s a trio of image variations, as well as a signed version which is the most expensive overall, despite the autograph being of the stickered variety.

The Cracked Ice Game Day Ticket is a great option that has received a lot of recent attention at auction, and it’s our personal pick from an investment perspective. It’s rare enough to command a decent price, while the camo design fits in well with his Florida State colors. 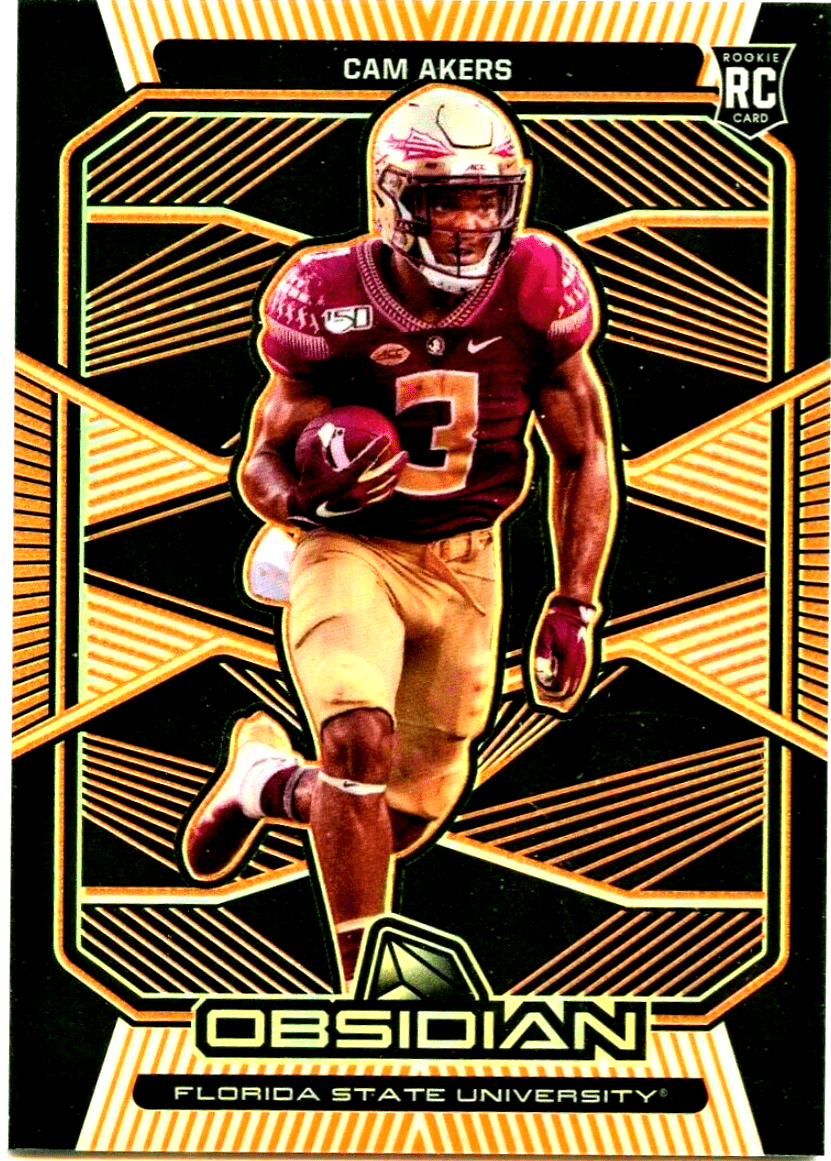 The final card to make our list comes from the small Obsidian Draft Picks set released by Panini. It was originally part of the Chronicles Draft Picks release but it was pulled out to make a standalone set, packaged with signed cards and a number of rare parallels. You’ll be able to find the serial number of the reverse of the card.

There’s an outlined profile shot of Akers with a football tightly gripped under his arm, staring off towards his left. Again, you’ll have to make do with a stickered autograph, but it’s still a great looking option. Of the trio of cards we’ve discussed, it has the tightest design overall, with a lined vertical finish that helps to emphasize the player. In terms of parallels, they’re all reasonably affordable, while the Yellow version is one of the best looking, and has a tiny print run of just 10 copies. 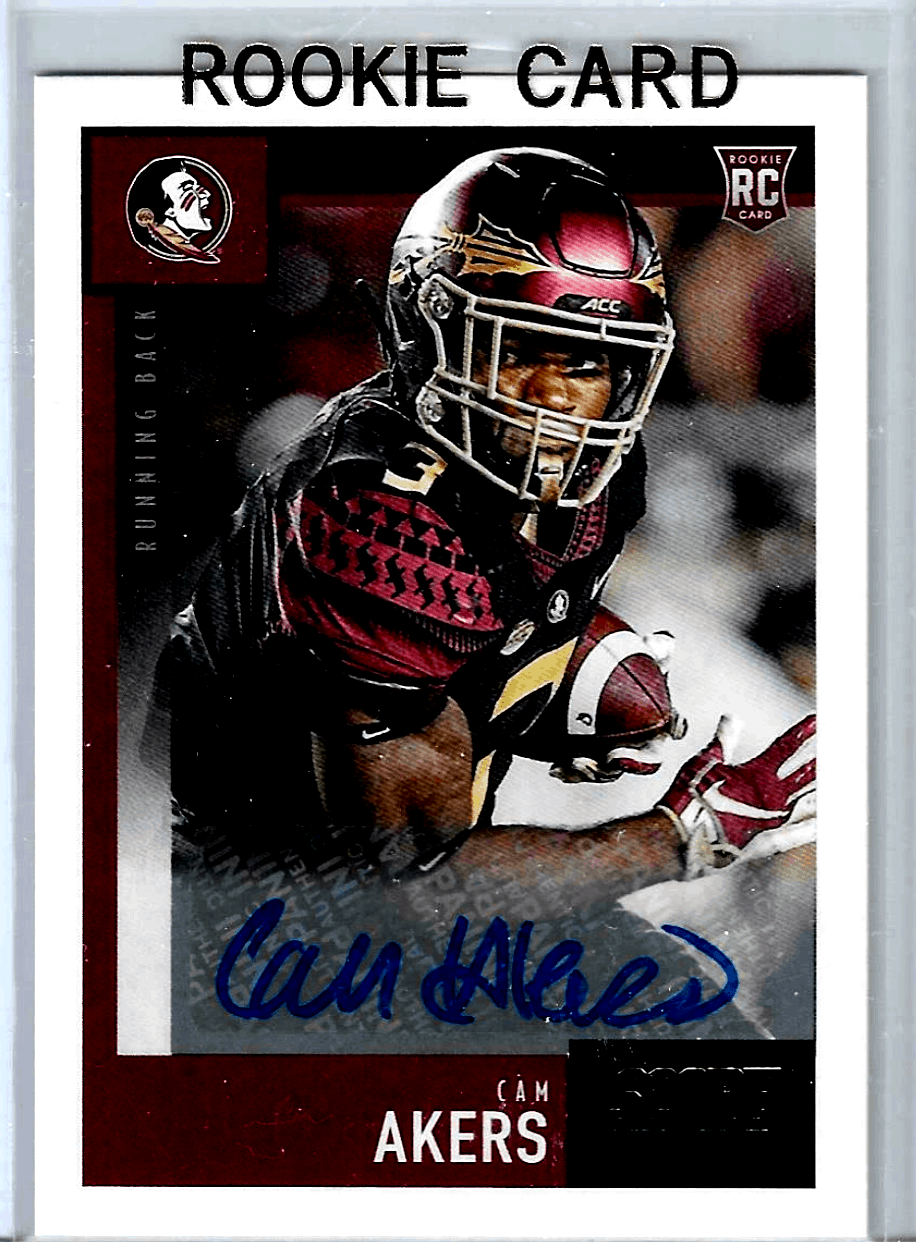 The most expensive Akers rookie card sold to date was a 2020 Panini Prizm Draft Picks Black Prizm Auto 1/1… a nice card but should be passed up once the bigger names drop.

If you would like advice in regards to buying a Cam Akers rookie card hit us up on the Gold Card Auctions Facebook Page or email us at advice@goldcardauctions.com… cheers!

Akers skipped the Sun Bowl to enter the 2020 NFL Draft, and the decision proved to pay off when he joined the Rams as the latest hot prospect who could potentially get decent game time. He’ll be competing with Malcolm Brown and Darrell Henderson for a starting spot, although Rams general manager Les Snead has already discussed the possibility of pairing Akers alongside Brown and Henderson in a backfield trio.

Snead noted that Akers had been on their radar for a while now, especially after the RB flourished despite Florida State’s recent struggles. Of the three Rams running backs, Brown is the veteran, but it seems like they’ll all share responsibilities as Todd Gurley’s replacement. It’s great news for Akers, having built up a reputation as a workhorse during his time at FSU. He also seems to be ahead of Henderson in the pecking order already.

From an investment perspective, Akers’ rookie cards have yet to take off like similar second-round picks, but that means that it could be a great investment piece if you’re able to pick them up for the right price. He’s also likely to get solid game time, so there’s every chance that a strong rookie season will see average prices rising across the board.