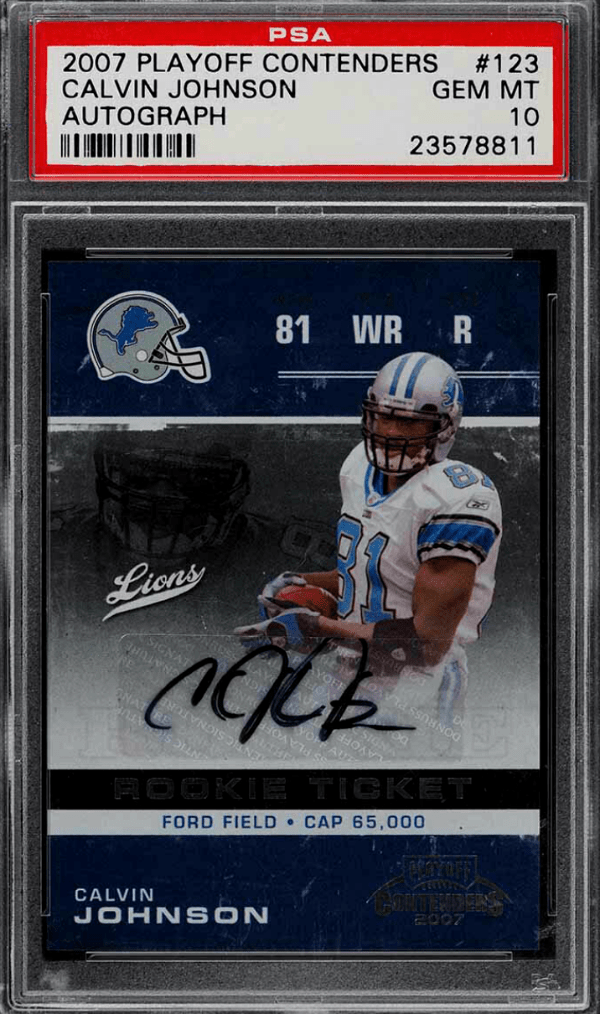 Calvin Johnson (09/29/85) is a retired wide receiver who spent his entire career with the Detroit Lions. He was the second overall pick in the 2007 draft and went on to break a range of NFL and franchise records over the next nine seasons.

The four-time All-Pro receiver made a controversial decision to retire in his prime, having played for a dysfunctional side that didn’t win a single playoff game during his nine years in Detroit. It was shocking at the time, but in hindsight, it’s hard to blame him.

Here’s a list with three top Calvin Johnson rookie cards, including investment advice if you plan to pick up a copy or two in the near future.

We’ve checked through recent auction data to bring you a list with three of the best Calvin Johnson rookie cards on the market right now. 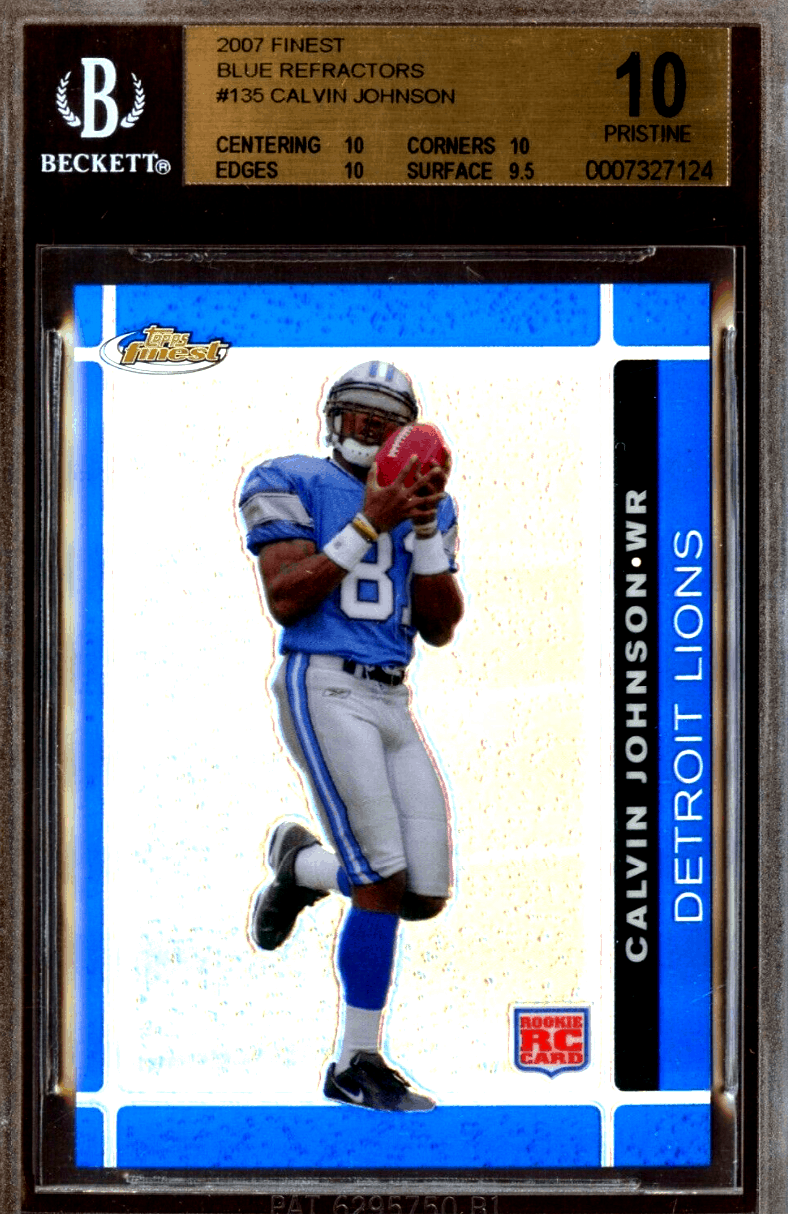 His 2007 Finest Refractor is the first to make the list for a number of reasons. It’s the most affordable card of the trio, although it still receives a lot of attention at auction thanks to a number of Refractor parallels and strong overall design.

It features a simple lined border, with an etched image of the player on one foot with a football held in both hands. There’s an old-school RC logo at the bottom and a silver background which helps Johnson to stand out further. His team name and position are listed along the right border.

Parallels change the border color, with a red base version. Blue and black are both on offer, with low serial numbers (/299 and /99) helping to drive the majority of interest.

If you’re in the mood for something a little more expensive, Johnson’s 2007 Playoff Contenders card is favored by a number of collectors.

The card is split into three segments, with the top and bottom serving as chunky borders featuring a team logo and the player’s name. The middle has an action shot of Johnson holding a football, with a second black and white image of the player used for the background.

There’s clearly a lot going on, although the blue and white motif blends in well with his Lions jersey. It has a print run of 525, while it has a stickered autograph which is a bit of a let down in comparison to premium options. However, it’s worth checking out if you’re interested in a mid-tier investment that is likely to retain value. 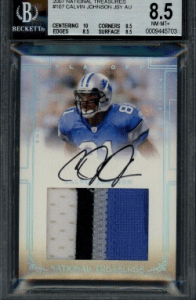 For a true taste of one of the best Johnson RCs that money can buy, look no further than his 2007 Playoff National Treasures. As well as the NT brand power, it has an on-card auto and a large patch found at the bottom, while its serial-numbered to just 99.

The card features a large close-up image of the player, with the auto found just underneath, filled using black ink. The background is a blurred stadium, with a silver trim completing the understated design. The patch is also high-end, featuring material worn during the 2007 NFL Players Rookie Premiere.

Along with his 2007 Exquisite Collection, it’s a popular option with investors that are interested in high-end RCs, although the NT is slightly more aesthetically pleasing on a personal level. 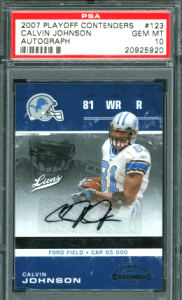 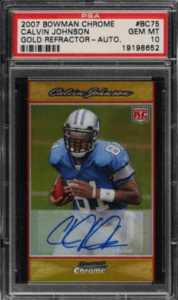 If you would like an estimated value of your Calvin Johnson rookie card please email us at value@goldcardauctions.com..

Considering the average NFL career lasts for just 3.3 years, it’s fair to say that Johnson had a good run at the top. For example, a number of his records still stand today, including the most receiving yards in a single NFL season, (1,964) and the Lions’ record for the most career receptions (731). He really was a unique athlete, naturally blending speed and power in a way few others could.

However, injuries soon took their toll, and the player later admitted that recurring concussions were also a problem over the years. His unexpected retirement in the 2015 season led the Lions to force him to repay a seven-figure portion of the $16 million signing bonus he received four years earlier, although it only helped to solidify his status as a great in the long run.

Johnson was the league’s top wide receiver for a time, and he’s always going to be seen as a legend despite a relatively short career for a lesser team. It has led to a few detractors questioning whether he’ll make it into the Hall of Fame in his first year of eligibility, and he’ll be up on the ballot for the first time in 2021.

His RC prices are likely to rise in the run-up to his selection, so now is probably the best time to buy if you’re looking for the best ROI within the next 12 months.