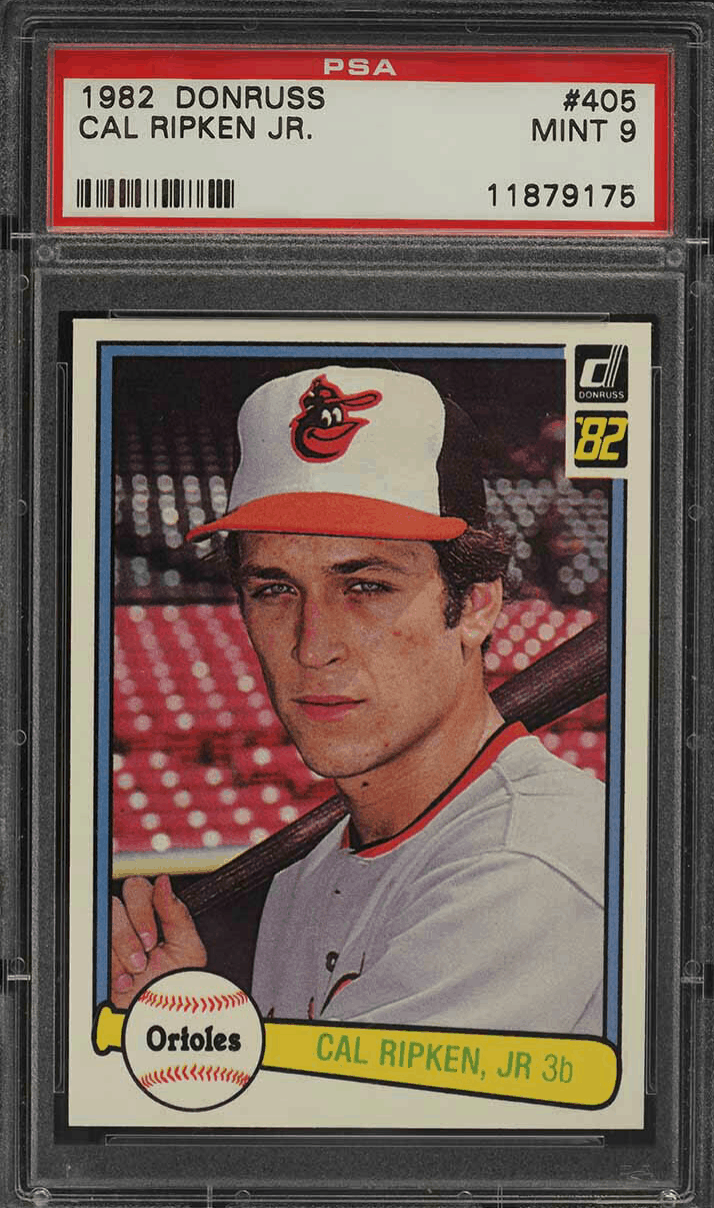 Cal Ripken Jr. (08/24/60) is a legendary former baseball shortstop and third baseman. He spent the entirety of his 21-season MLB career playing for the Baltimore Orioles and was a 19-time All-Star and a World Series champion in 1983.

Here’s the ultimate guide for his rookie cards, with a checklist, five great options, and an investment outlook for the next few years.

Ripken’s rookie cards came out just before the junk wax era, (1986-93), while a number of popular versions were released in the years leading up to his retirement. As well as three popular rookie card options, we’ve listed some more to look out for below. 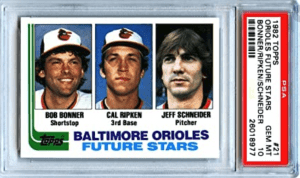 Ripken Jr. takes pride of place in the middle of this ‘Future Stars’ card, flanked by Bob Bonner (shortstop) and Jeff Schenider (pitcher). They were all Orioles rookies at the time, but only Ripken managed to carve out a successful career in the sport. The reverse has a list of basic stats, while a PSA 10 grade recently sold for $795 after attracting 42 bids. 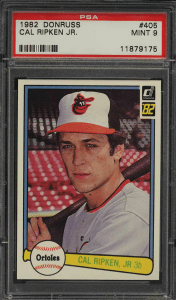 It’s not especially rare, but the 1982 Donruss is my personal favorite. A PSA 10 grade recently sold for just under $240 so it’s affordable, while it features a large, close-up image of Ripken with bat in hand. An all-round classic, the back has a quote listing his career highlights to date; 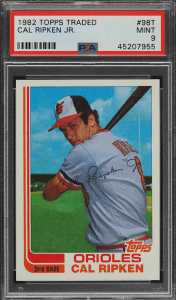 The 1982 Topps Traded is by far his most desirable rookie card option. It’s a classic, featuring Ripken squaring up to bat, with loud, contrasting colors. A PSA 10 grade recently sold at auction for $1,475, attracting 82 bids as it was bitterly fought over. In comparison, a PSA 9 went for just $179.50, with 49 bids overall. The reverse quote reads; 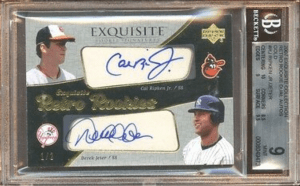 Out of all the combo cards in the baseball card hobby this has got to be one of the better ones.

The Iron Man and Captain Cluth on the same card! Whoa!

This card will not be up often on eBay auctions but when it is we suggest making a winning bid. 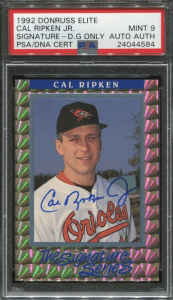 Nearly three decades on, it’s difficult to find a perfect copy because of the metallic foil border, which scuffs far too easily. A PSA 9 recently sold for $301, while a rare gem version will sell for thousands. (So much for the junk wax era!) There are two versions, with one missing a signature on the front, as well as the numerator in the serial number.

“Cal Ripken, the tallest player ever to play shortstop regularly in the major leagues, may in time stand tallest of all Orioles as he breaks record after record. And, in the mid-’90s he should break Lou Gehrig’s record of playing in 2,130 consecutive games. He is the second player featured in the Donruss Signature Series, personally signing during the off-season, 5,000 of these specially numbered cards. Dick Perez, the official artist for Donruss and the National Baseball Hall of Fame, created this card using a two-dimensioned hologram and metallic foil.” 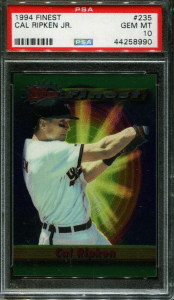 Numbered 235, Ripken’s 1994 Topps Finest is a popular option that was released midway through his career. It has a strong design, although there’s no signature to be found. There is a refractor version, with a gem mint grade recently selling for $300. The reverse lists his ‘Finest Moment’; 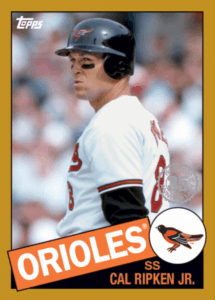 If you’re looking for something more recent, the 2020 Topps Series 1 has an insert set, celebrating their 35 year anniversary with a host of stars from 1985. You’ll be able to find the following parallels;

There’s no quote on the back, although there is a guarantee of authenticity for the signature.

Here’s a checklist with his rookie and prospect options.

Ripken is a living legend by every metric. He earned 98.53% of the vote as he was inducted into the Baseball Hall of Fame in 2007, and was the Rookie of the Year in 1982. Meanwhile, his record of playing in 2,632 consecutive games over more than 16 years can’t be bettered, and it’s the reason why he’s known as the “Iron Man”. It’s unlikely that the feat will be matched anytime soon.

The majority of his rookie options suffer from centering issues given they were released in the early 80s’, but they’re still incredibly popular with the majority of collectors. Meanwhile, he has lots of interesting cards to suit every budget if you’re looking at later years.