Cale Makar (30/10/98) is a defenceman who plays for the Colorado Avalanche in the NHL. He was selected in the first round of the 2017 Entry Draft, coming in as the fourth choice overall.

He turned pro in April 2019, signing a three-year contract. Makar scored his maiden NHL goal with his first shot in his debut just a day after putting pen to paper.

We’ve provided a checklist for his rookie cards, rookie card investment advice, and a trio of the most popular Makar RC options currently selling at auction.

Here are the three must-own Makar rookie cards at this very moment. 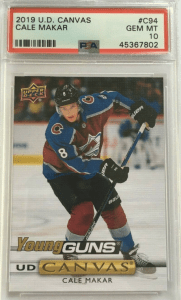 Upper Deck Young Guns are the must-have rookie cards in the world of the NHL (currently).

Numbered C94, Makar’s Upper Deck Canvas card is worth checking out if you’re looking for a solid investment option.

As with the others we’ve mentioned, there’s an image of him moving on the ice, along with a distinctive borderless design that helps to catch the eye.

The reverse lists his 2018-19 NCAA stats, with a zoomed-in image of the picture found on the front.

There’s no signature or player patch, but Young Guns cards are always popular with collectors.

Ungraded versions are selling for anywhere from $80 to $120, making it an excellent mid-tier choice with the potential for gains in the future. 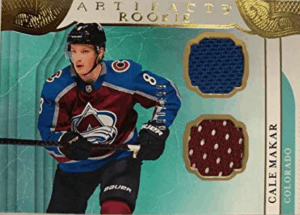 His Artifacts card may contain player-worn material that can be seen on the front, instantly upping the value. There’s a full-length image of the player in his Avs uniform, with a large border for his name and a Rookie label along the outside.

As well as his NCAA stats, the reverse has basic information and a guarantee for the player patch.

Red, Blue, and Gold versions have all recently sold for roughly $20, which is somewhat understandable considering the large print run.

For example, the Gold version with a patch is numbered 499, while a red border with no patch has 398 others up for grabs.

It’s no coincidence that a Green Border (99) recently sold for $55. 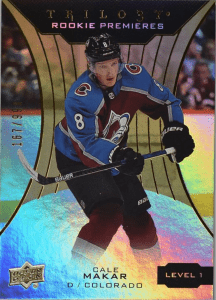 This Upper Deck Trilogy card is another that is always popular at auction. One recently sold for just over $150 after amassing 86 bids by collectors fighting it out for the chance to get a signed piece of rookie memorabilia.

The card features Makar making his way through the ice with his stick at the ready. A signature is the main reason for the interest, as well as parallels which are numbered to 249.

As with the card above, there’s no quote on the back. There’s a typical list of basic stats like height and weight but nothing else of note.

If you hadn’t guessed, you’re mostly paying for the signature. 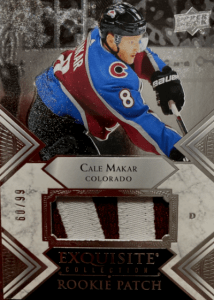 Available in various colors and parallels, Makar’s Black Diamond cards are worth checking out if you’re looking for a solid investment option at the lower end.

As with the others, there’s an image of him on the ice, along with a distinctive border that catches the eye.

A parallel with an on-card signature recently sold for under $200, while a Blue version (numbered 99) went for under $70. It’s a smaller investment, which is easier to swallow if you’re aiming to pick up multiple cards before his career takes off. 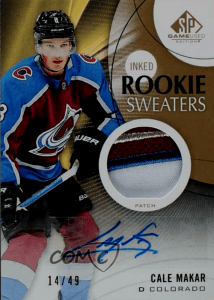 This is one of the most challenging Cale Makar cards to find, and it commands a high price.

On the left side of the card is a photo of Makar wearing his Avalanche draft cap on draft night. The card’s main feature is a large patch, and each card has a different letter from Makar’s last name.

In addition to the patch, Makar’s autograph is placed on top of it, and the combination of those two features makes this an exceptional card.

With the print run limited to only 35 cards, it will be tough for collectors to get their hands on this one. 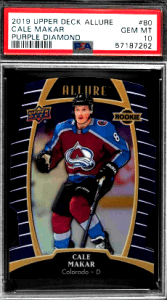 Here’s a checklist with a roundup of Makar’s many RCs.

(As a carryover rookie from last season, his cards will appear throughout 2020.). This means they’re coming out right now, with other Upper Deck sets due to come out until late April.

This means that we can’t provide a full list yet, but here are some of Makar’s rookie cards that have already been released; 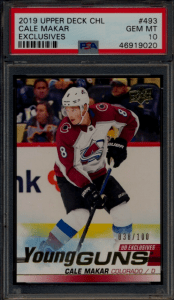 If you want to buy a piece of Makar for your investment stash but want advice, please email us at advice@goldcardauctions.com or slide into our DMs on Facebook!

Indeed, Makar was recently snubbed in the All-Star game, which will impact his overall prices in the short term. Regardless, if he carries on in his current form, he’s likely to be recognized as one of the key players in the league this season.

ESPN has noted that Makar has been the front-runner for the Calder Trophy so far, highlighting his progress during his first year of competition in the NHL.

Of course, the sheer number of options dilutes the value of his rookie cards to some degree, but there are still several versions that are already starting to increase in price as he continues to defy his critics.