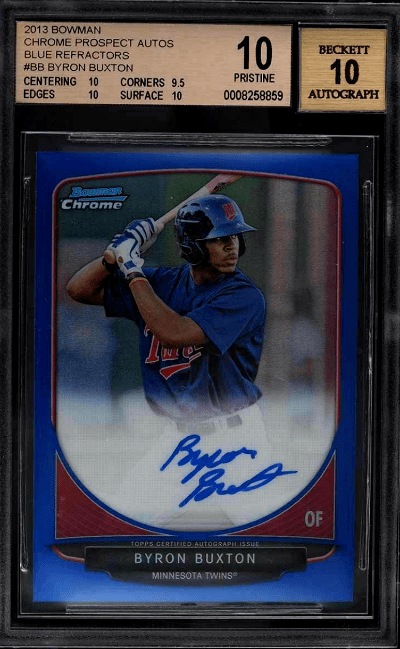 He’s been described as “Diet Trout”, flashing elite defensive skills along with power, consistent contact, and speed on the offensive side.

We’ve identified some of the most valuable cards featuring this highly skilled ballplayer.

Buxton is a high-floor investment opportunity for baseball card enthusiasts. These are some of the cards to seek when hunting for high-value Buxton RCs. 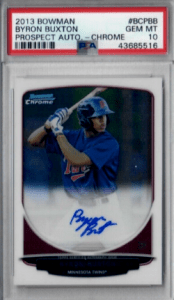 This prospect card is one of the most popular Byron Buxton cards on the market, if not the market leader.

It has all the trappings of a high-quality rookie/prospect card: Buxton in a Twins jersey, an autograph, strong visual appeal, and a variety of parallels.

The card features Buxton at the plate, recoiled in his compact stance. He wears the trademark prospect helmet with two ear covers and a pair of blue-and-white batting gloves.

It’s clear that Buxton is fresh out of high school, as his rail-thin frame would be out of place on a big-league field.

The card’s design features a rounded rectangular border, with a downward-facing arch that connects with a nameplate. Above the arch is Buxton’s autograph in blue ink. 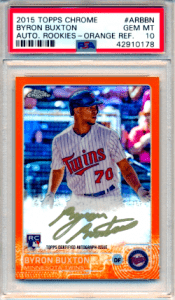 The 2015 Topps Chrome set included a subset of 55 autographed rookie cards. Buxton’s is a standout from this subset.

The card features Buxton in his grey, pinstriped #70 Twins uniform. He stands at the plate, casually extending the bat in his left hand.

A pixellated background shows spectators, while a thin colored border varies in color depending on the specific parallel.

The bottom of the card features a nameplate, MLB diamond logo featuring an “RC” for rookie card, and a Minnesota Twins logo.

There are several valuable Refractor parallels available, including the SuperFractor (/1), Red Refractor (/5), and Orange Refractor (/25). 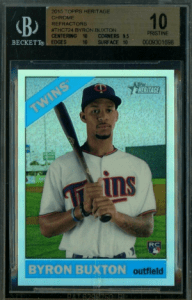 The 2015 Topps Heritage set combines the old school with the new. The chosen design mirrors that of the 1966 Topps baseball set.

The lettering on the nameplate, as well as the overall simplicity of the card, will remind collectors of baseball cards from a bygone era.

And yet, the players on the cards (including rookie Byron Buxton) are undeniably new-school.

The backside of the card features Buxton’s minor league stats, a blurb about his ascent, and a cartoon illustration that is thoroughly 1966.

Gold Refractor and Black Refractor parallels are rare versions of this card. 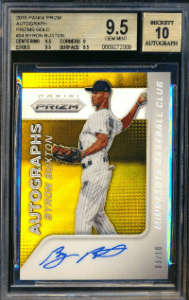 Byron Buxton has always had the makings of a superstar. Though he’s had injuries throughout his career, Buxton’s cards have a high-value floor thanks to his talent.

Let’s be frank: Minnesota has always been a tough market for an athlete’s national exposure. That said, a change of scenery could come with a corresponding uptick in Buxton’s card value.

Buxton is certainly trending in the right direction as a player, which si a good sign for those who own his rookie cards.