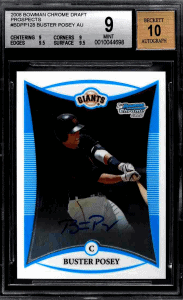 Buster Posey (03/27/87) is a catcher who has played for the Giants since making his major league debut in 2018. A six-time All-Star and a three-time World Series champion, is it worth taking a punt on his rookie cards?

Here’s a roundup with three of the best Buster Posey RC options, as well as investment advice that looks at the next few years.

His official rookie cards were released in 2010, but Posey’s prospect cards from 2008 make later versions somewhat redundant. With that in mind, we’ve picked three of the very best you’ll find on the market.

Posey’s Bowman Chrome prospect is traditionally his most popular early card, attracting a lot of attention from collectors. It’s easy to see why.

There’s an action shot of Posey swinging a bat, and he’s in his Giants uniform. The card notes that it’s Posey’s 1st Bowman Chrome, while there’s an on-card signature located at the bottom. 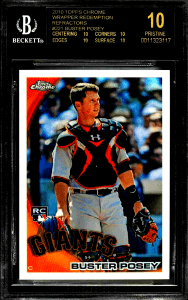 Topps offered a special set of rookies and Hall of Famers as part of a 2010 Topps Chrome wrapper redemption program, which is how Posey’s card came to be the 221st card in a 220 card set.

The image shows Posey wearing his normal clothes, standing on the pitch with some basic Under Armour equipment. As it’s from 2010, you’ll find an RC logo in the left side, while it has a massive team logo at the bottom. 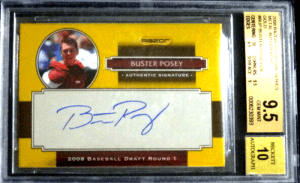 Part of a tiny set, the 2008 Razor Signature Series is a signed option with a minuscule print run. The Razor is a yellow landscape card that pays attention to the autograph, as it takes up the majority of the available space.

Timed with the 2008 Baseball Draft, it also has a small image of Posey at the top. It’s worth noting that the Signature Series is several times more expensive than the base version.

Posey is an accomplished player and a Giants legend. From his 2010 National League Rookie of the Year award to his three World Series wins in later years, he’s been a loyal servant to the team over the past decade.

He signed a franchise-record nine-year, $167 million contract extension with the Giants back in 2013, although he could have already been replaced by a side with one eye on the future.

That’s not to say that there won’t be offers from a range of potential suitors.

One of the more collectible catchers in the sport, Posey has a heap of interesting RC’s and parallels that should be on your radar, no matter where he ends up when his current contract expires.

Expect a bump in prices when he calls time on his career, as well as another when he inevitably enters the Hall of Fame.