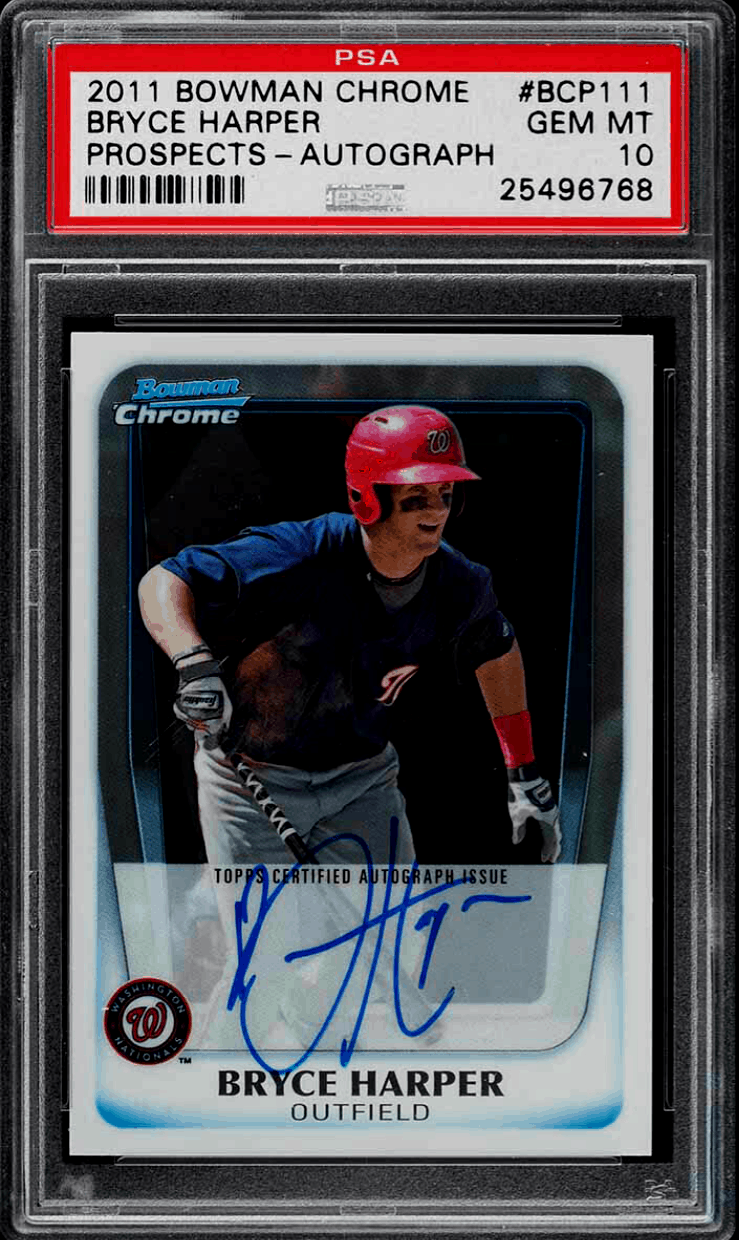 Bryce Harper (10/16/92) was drafted by the Washington Nationals with the 1st pick of the 2010 MLB June Amateur Draft from College of Southern Nevada (Henderson, NV). It didn’t take him long to contribute to the team as he jacked 22 homers in his first season with the Nats.

In the winter of 2019, he signed a massive free-agent deal with the Philadelphia Phillies (13-year, $330 million), and then ironically the Nationals went on to win the World Series that same year.

Harper has flashed signs of greatness as he led the National League with 42 home runs and 118 RBIs in 2015. He has since not come close to matching those numbers to leave many wondering was it a fluke or has he just not been able to put it all back together. 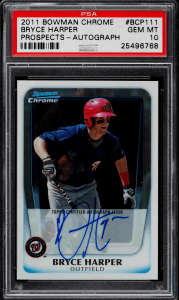 This is our favorite Bryce Harper rookie card and we have recently loaded up on a half a dozen of them. You can see a photo of a 19-year-old Harper playing in the minor leagues and his autograph on the front.

It looks like Harper is casually jogging out of the batter’s box after a called ball four (although it could be a base hit to no Harpers tendency to leave the batters box in a not so quick pace).

Numbered #BCP111 the reverse of the card reads “Astonishing high school talent as a catcher… As power-packed as any player scouted in recent years…Combines talent with intensity…Howitzer arm.” 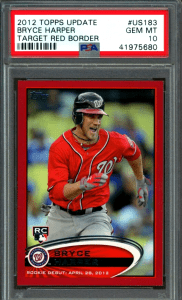 Here is another high-end Harper rookie card worth adding to your investment portfolio if you believe he can reproduce his 2015 season.

The 2012 Bryce Harper Topps Update card features him running down the base path (either to home or 2nd base) with an all-out hustle look on his face.

Numbered #US183 the reverse of the card reads “The heralded Harper’s debut was the headline o the day when the teen suited up as the youngest non-pitcher in franchise history. He performed like a vet with a booming double, a tiebreaking sac-fly in the ninth and a perfect throw to the plate“. 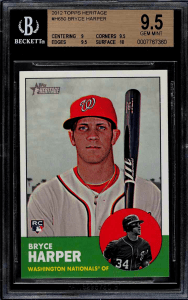 Here is a good option for the mid-range investor as the 2012 Bryce Harper Topps Heritage card won’t cost you an arm and a leg.

The 2012 Bryce Harper Topps Heritage RC is a pretty decent buy for those looking to skate by on a Harper rookie card on the semi-cheap.

The card is numbered #H650 and pictures a disheveled looking Harper in the classic 1989 Griffey Jr. Upper Deck Rookie Card image mode (seriously, it looks like Bryce just checked out the Betty Ford clinic and is not happy about leaving).

The reverse of the card reads “Oblivious to the mania surrounding his arrival in 2012, this teenage phenom became an NL Rookie of the Year candidate. Bryce was the youngest player in 14 years to hit a homer“. 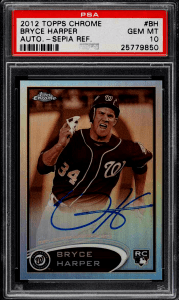 Another good investment Bryce Harper rookie card that includes an autograph! Numbered simply #BH the card shows jugging around the base paths and is available in a variety of parallels (we love the Sepia refractor shown in the image above).

The back of the card reads “Bryce reported to spring training 1 and a half inches taller and 10 pounds heavier than he was in ’11 just what pitchers wanted to hear about a phenom who doesn’t celebrate his 20th birthday until October and has already abused them in his ascent up the ladder. After debuting with a .894 OPS last year, he began ’12 with hits in his first two Triple-A at-bats“.

Harper’s rookie cards are somewhat undervalued when compared to the potential he has to put up MONSTER seasons.

If you have a Bryce Harper rookie card and would like a price estimate please DO NOT hesitate to email us at value@goldcardauctions.com. Include at least 2 photos and allow up to 72 hours.

If you would like advice in regards to pulling the trigger on a high-end Harper rookie card worth some real coin by all means hit us up at the Gold Card Auctions Facebook page via DN or email us at advice@goldcardauctions.com!

Please note this has become a popular feature and it may take us up to 72 hours to provide advice… if it is an auction-type situation please note that in the title and we will expedite the request… cheers! 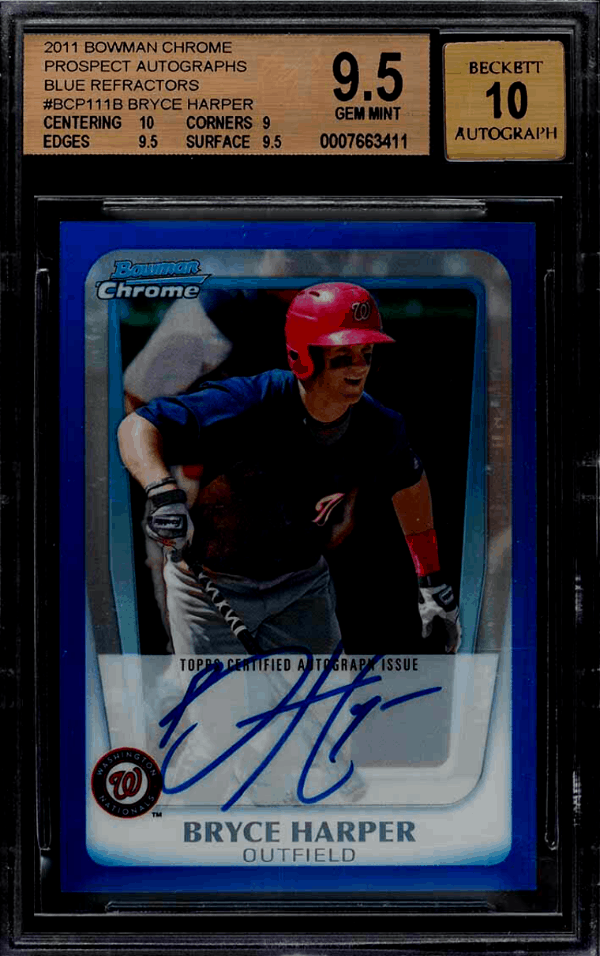 PHEW! This kid has a ton of rookie cards!

As you already know Harper made the jump from Washington DC to the city of Brotherly Love aka Philadelphia in the Winter of 2019.

Here are some of the better Bryce Harper baseball cards of him in a Phillies jersey worth tossing a few dimes at.

Bryce Harper has had his ups and downs during his eight-year MLB career. He is an intense player who can fire up the crowd on a nightly basis.

We have a love-hate relationship with him and his rookie cards as we feel he has the talent to be the best in the league but for whatever reason, it never comes to fruition.

Buying Bryce Harper rookie cards at current price levels is a good thing and could pay off handsomely over the next few years as we see PEAK HARPER.

We may end up with egg on our face but we truly believe he is ready to start putting up those monster seasons on a consistent basis for the next few years. Not only is he in his prime at age 28 but he plays in Citizens Bank Ballpark which is super friendly to power hitters.