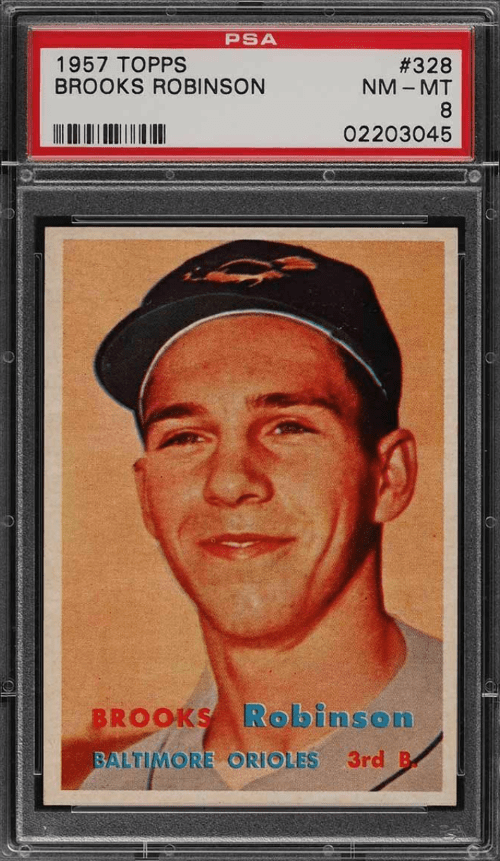 The legendary Brooks Robinson (05/18/37) spent his entire 23-year major league career for the Baltimore Orioles (1955–1977), which is a record that still stands today.

Quite possibly the greatest defensive third baseman in major league history, he won 16 consecutive Gold Glove Awards during his career, was an 18-time All-Star, and won two World Series rings, being named as the MVP in 1970.

Here’s a rundown of Brooks Robinson’s best rookie cards, along with an investment outlook for the next few years.

There’s only one Robinson RC to keep an eye out for, released way back in 1957.

The 1957 Topps card is the only Robinson RC, released two years after his first appearance for the Orioles. Part of a great post-war set, it has a large posed profile shot of the player as he smiles at the camera. His name, team, and position are found at the bottom in red and blue text, and it has a thick white border.

Many of the cards from the set are fairly dull, but this is a clear exception. However, the light background is a breeding ground for print defects, which are instantly noticeable.

Over 2,500 Robinson cards have been submitted for grading to PSA, with only one card earning an elusive gem mint rating. The set includes the base cards of stars like Mickey Mantle and Ted Williams, making it extremely popular with collectors. 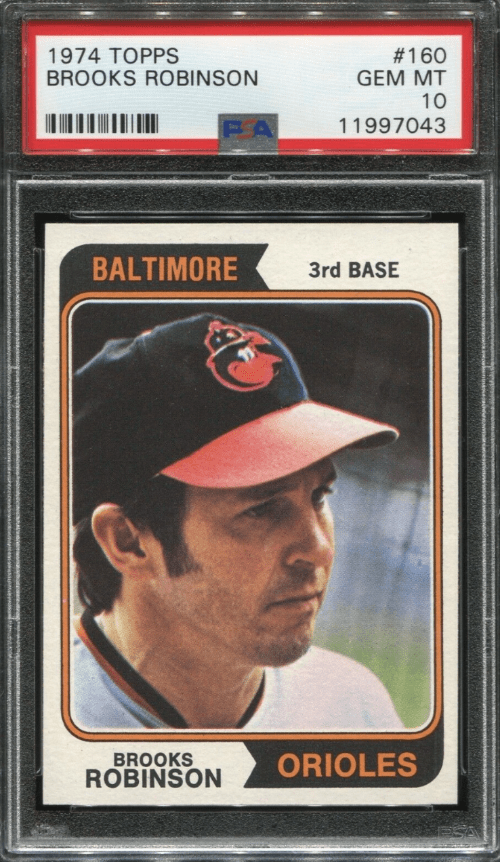 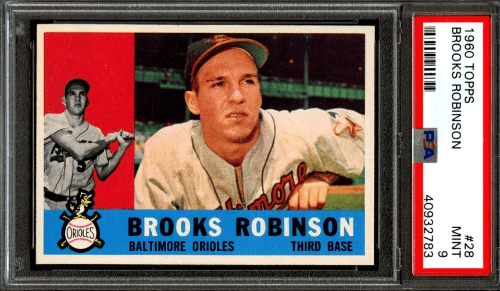 The final card on our list is the 1960 Brooks Robinson Topps card which is numbered #28. A cool looking card that shows a young Brooks in the year he really broke out in professional baseball.

The Baltimore Orioles Logo is plastered in the left had-corner while his name is centered at the bottom.

If you have a Brooks Robinson baseball card and would like an estimated value please email us a few photos to value@goldcardauctions.com.

Robinson is a living legend, with a career that most players couldn’t dream of. He’s still going strong at the age of 83 and is regularly mentioned in the news if they’re in need of a feel-good story. For example, 2020 marks the 50th anniversary of his second World Series win, where Robinson was also named as the MVP.

His RC is one of the keys to a stunning set, and the lack of gem mint versions has helped to keep prices relatively high. (The sole PSA 10 copy last sold for $47,251, back in 2012.) Mint copies are the most realistic option, and they’ve picked up in both price and interest over the past few years.

With a career spanning over three different decades, Robinson has a wide range of cards, including a few released in 2020 sets. They may have signatures and colored parallels, but they’re always going to struggle to match his RC in terms of prestige or price.

As such, it’s a great long-term investment piece, especially if you’re willing to hold onto the 1957 Topps for a significant portion of the time. Values have risen substantially over the last decade, and are likely to continue to do so if they follow current trends.