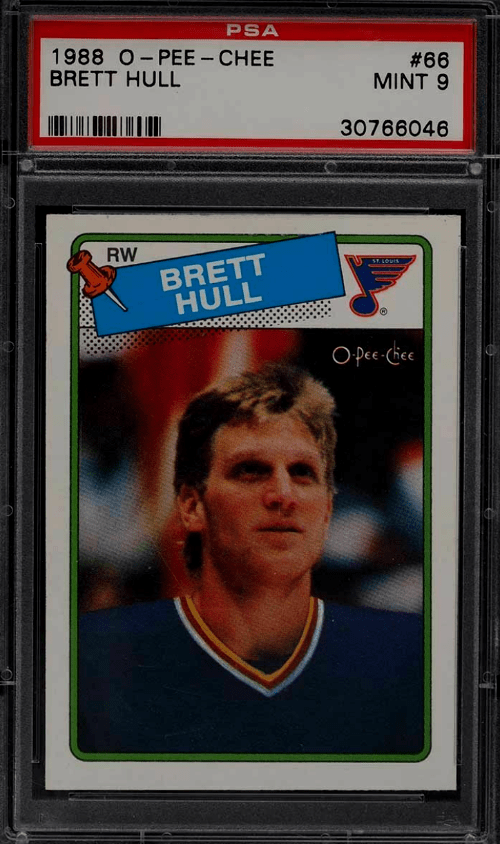 Having featured for the Calgary Flames, St. Louis Blues, Dallas Stars, Detroit Red Wings, and Phoenix Coyotes between 1986 and 2005, NHL fans of a certain age are sure to remember Brett Hull (08/09/64).

He was a member of two Stanley Cup-winning teams and is known to be a prolific sniper who couldn’t stop scoring throughout his career.

We’re looking at his collection of RCs today, with three top options and investment advice if you’re interested in flipping a copy or two yourself.

Brett Hull’s rookie cards are a product of their time, released in the late 1980s when there wasn’t much attention given to signed cards or parallels.

Hull is featured in the major hockey sets from ‘88, but they’re not the most impressive batch from an investment perspective. We’ll start with the most popular option, which is a Topps release. 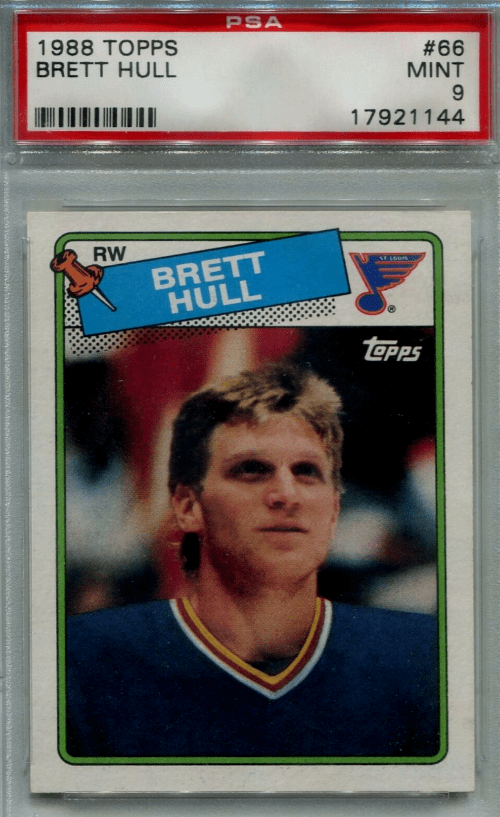 Hull is one of the key players found in the 1988 Topps set. Featured in his St. Louis Blues jersey, it’s a plain card by today’s standards.

The player is pictured in a simple profile shot as he stares off-camera with a blurred stadium background.

“1988 Topps HUll RCs sell for a significant amount, and the condition sets it apart from the thousands of copies that exist to this day”

The card has a thick white border, while his name is found on a blue rectangle at the top. There’s a small pin illustrated on the name tag, giving the appearance of sticking it onto the front.

You’ll find basic stats and info about Hull’s Calgary Flames career on the reverse. We’d recommend looking at gem mint copies only as an investment piece.

Wait for a second… Didn’t I just describe this card?

The 1988 O-Pee-Chee Hockey set is the Canadian counterpart for Topps releases, and they tend to be very similar in style and design.

One clear difference is the OPC logo found in place of the Topps one, placed under the white tab at the top.

The reverse is also bilingual in parts, catering to a French Canadian audience.

OPC cards tend to be more valuable than Topps copies, but this is an exception, as the player was arguably more popular in Canada then.

For example, he had dual citizenship in Canada and the United States and was eligible to play for either Canada or the U.S. internationally. (He chose the latter, winning the 1996 World Cup, and a silver medal at the 2002 Olympics.) 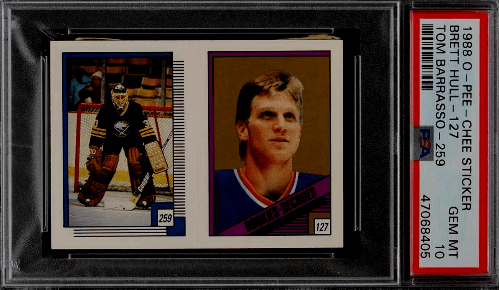 It might be a sticker rather than a traditional RC and includes two-time Stanley Cup champion, Tom Barrasso. However, this 1988 OPC release is still one of the better options if you’re hoping for valuable early Hull collectibles.

Adding Barrasso on the double sticker is no real drawback, as the goaltender is also a Hall of Famer with a great legacy.

He’s featured in an action shot on the left, while Hull is found on the right in a simple profile shot similar to the one seen in the cards above.

As an OPC card, it has a bilingual ‘rookies/rescues’ at the front.

Only nine PSA 10 copies are found in their registry, so gem mint versions can easily sell for four figures.

The most expensive Brett Hull RC is the 1988 O-Pee-Chee Hockey RC #66, while the most commonly found for auction on eBay is the 1988 Topps RC. If you are looking to purchase a Brett Hull RC but want advice, please email Gold Card Auctions at info@goldcardauctions.com for FREE helpful advice. 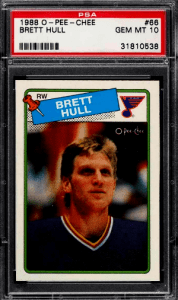 A living legend, Hull still has one foot in the game. He’s currently the executive vice president of the St. Louis Blues and was formerly their GM.

There’s a solid market for Hull collectibles, especially when looking at gem mint versions that have managed to get this far without a scratch.

Over 30 years on, they’re some of the best cards in their respective sets, and they receive a decent amount of attention at auction whenever a PSA 10 copy becomes available.

They may have been produced during the beginning of the junk wax era, but the best versions have managed to avoid the low prices found with most sets from the time.