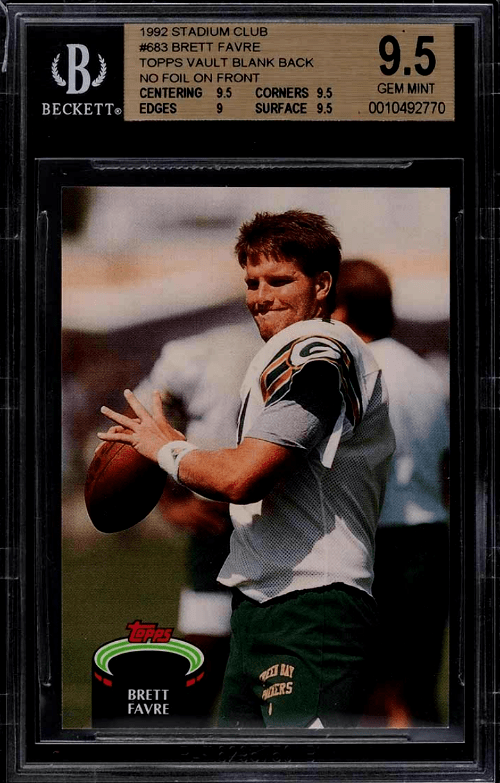 Brett Favre (aka the Ol Gun Slinger) is a retired quarterback, best known for spending the majority of his career with the Green Bay Packers.

Brett was drafted by the Atlanta Falcons with the 33rd pick in the 2nd round of the 1991 NFL Draft.

Favre began his rookie career at the Atlanta Falcons in 1991 and moved to the Packers a year later.

After fifteen seasons he went to the New York Jets and ended his career after two years with the Minnesota Vikings. Brett Favre (aka the Ol Gun Slinger) is a retired quarterback, best known for spending the majority of his career with the Green Bay Packers.

He broke numerous records during his playing career and was the first NFL quarterback to pass for 500 touchdowns, throw for 70,000 yards, completed 6,000 passes, and attempt 10,000 passes.

Here’s a rundown of three of his best rookie cards for investment purposes. 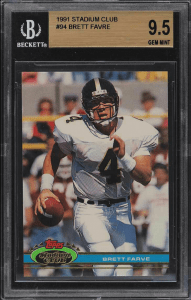 A great option if you can pick it up for less than $40, this card is widely available in mint condition. It’s not rare by any means, but that does make it easier to find in premium condition.

The card shows Favre in his college uniform (The University of Southern Mississippi), with a misspelling of his name on the front (Farve). 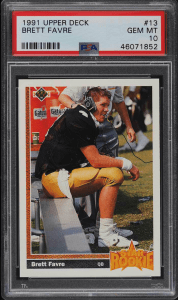 Not to be confused with the normal variant, the autographed version recently went for over $80. The unsigned card generally goes for anywhere from $5-$20, so the name makes a massive difference.

It shows Favre seated midgame with a sheepish look on his face (most likely he just tossed an interception). 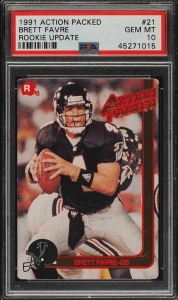 The Action-Packed Update rookie card shows Favre in the classic black Falcons Jersey looking for a running back out of the back-field?

A nice little card for the money.

Numbered #21 the back of the card reads “The future triggerman of the Falcons, ‘Red Gun’ Offense, Brett holds the Golden Eagles all-time records for completions, attempts, passing yards, and TD passes. A highly motivated competitor, Brett bounced back from a pre-season car accident to earn AP-All America honorable mention honors in 1990.” 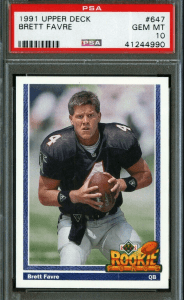 You can expect to get Farve rookie cards somewhat cheap considering how he is one of the best NFL Quarterbacks of all-time (cards such as Tom Brady Rookie Cards go for 10 times as much in some cases).

The problem with Favre rookie cards is they are lacking a true SSP/rare card. 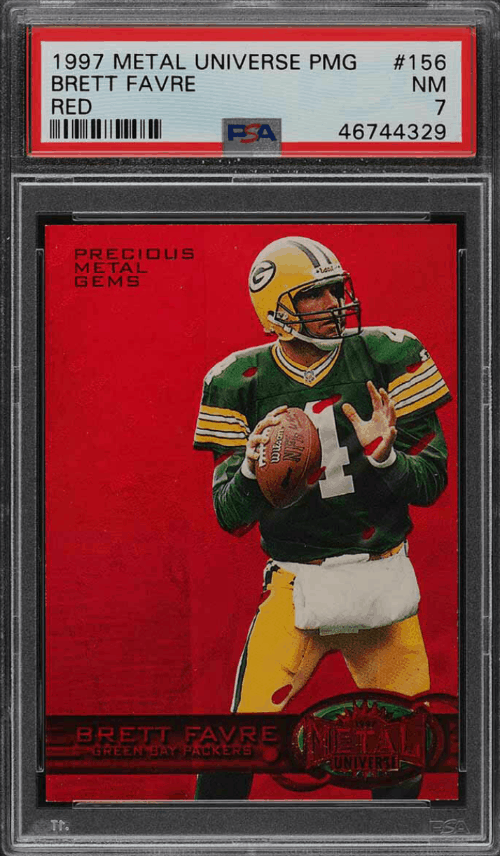 Even though the above card is not one of his rookie cards we still feel like it is worth mentioning as it should have a terrific ROI going forward and it is one sweet looking card!

The 1997 Metal Universe Brett Favre Football Card is not a rookie card BUT it is one of the best (if not the best) card picturing him in a Green Bay Packers jersey… we love, LOVE this card and prefer it to all of his other cards (rookie cards included).

Favre played in an era where rookie cards were generally mass-produced, and there’s a heap on the market for next to nothing.

Trending: Why You Should Be Investing In Sports Cards

From an investment perspective, it’s hard to tell whether his cards are worth taking a punt on, especially considering the high volume of the majority on the market.

If you manage to snag one for a decent price it’s a no-brainer, but you could probably do better looking elsewhere.