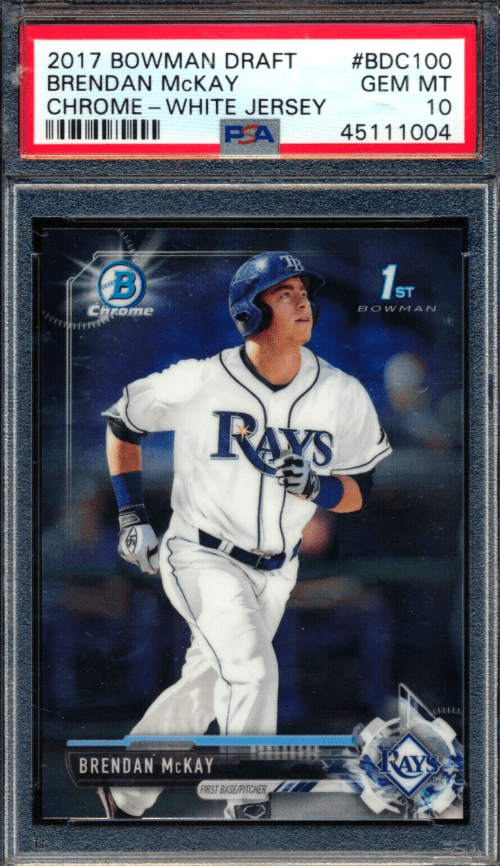 Brendan McKay (12/18/95) is a pitcher and designated hitter who passed up on the opportunity to play for the San Diego Padres when he was picked in the 34th round of the 2014 MLB draft.

It proved to be the correct decision, as he was later selected by the Tampa Bay Rays in the first round (4th overall) in the 2017 draft, earning a massive signing bonus. He made his major league debut in June 2019, and big things are expected in the future.

Here’s everything you need to know about three of the best Brendan McKay rookie cards, along with investment advice for the future.

We’ll be focusing on 2017 as McKay has a variety of interesting prospect cards that were released in the first year he was drafted. We’d recommend looking at gem mint versions when possible, as the cards are still reasonably new. 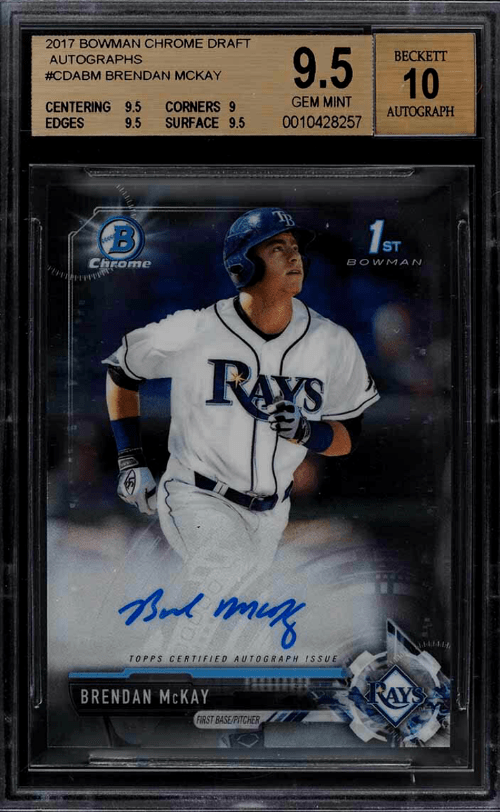 The first card on the list is part of the 2017 Chrome Draft Pick Autographs Set.

A crystal clear image of McKay takes center stage, as he stares up towards a ball in the sky. His Rays jersey is clearly visible, while there’s an understated background design that leaves the focus on the player. There’s a 1st Bowman logo on the top left corner, and there’s a white patch at the bottom to allow for an on-card auto-filled in blue ink. 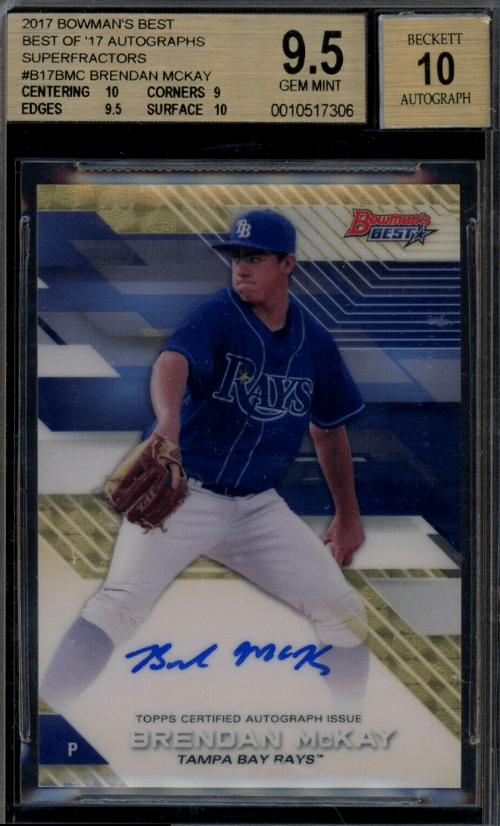 Featured in the Best of 2017 Autographs Set, this is another signed card that is definitely a great investment option.

There are two image variations, which either shows McKay swinging a bat or preparing to catch a ball. A bunch of rare parallels up the value considerably, and they’re all numbered to 99 or less. It’s not my favorite design of his 2017 options, but that hasn’t stopped it from being one of the more popular McKay RCs at auction.

As well as the base card and the parallels listed above, McKay has an SSP in the 2017 Bowman Draft Baseball set, with this autographed version limited to just 99. The base card shows an image of McKay in motion wearing a white kit, while the SSP shows him pitching in blue. This is arguably the better photo of the two, with a strong action shot of the player as he raises one knee with a ball in his glove.

You’ll find an on-card auto at the bottom, along with a 1st Bowman logo found at the top. 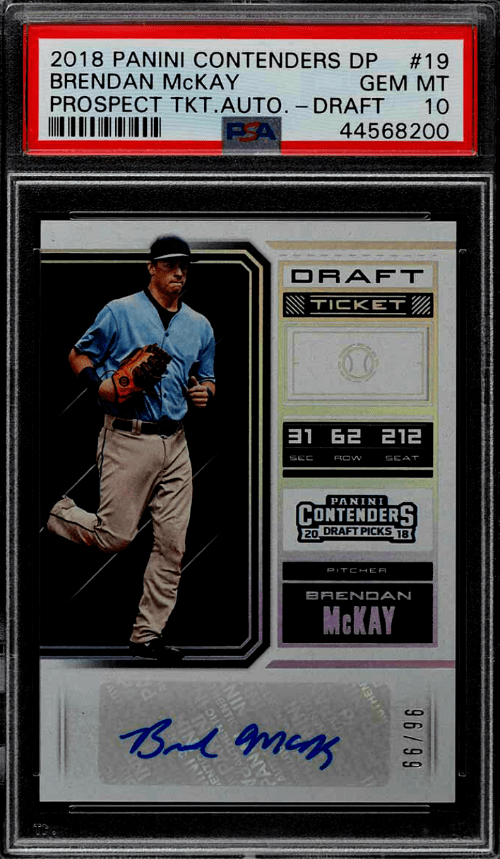 Positive Covid-19 results and shoulder tightness have held back the rookie during the beginning of the 2020 season, and his team could do with his help after a poor start. However, manager Kevin Cash noted that the shoulder problems could be worse than first expected, which would obviously be devastating for both the player and the team;

“Brendan has noted that he has had some issues, even dating back to last year, after his San Diego start (on Aug. 13) he said he didn’t feel right, I’m not totally sure that he has completely gotten past that of having no issue. His buildup was going well and then after an outing he kind of went in and said, ‘I just feel really tight and not comfortable in my shoulder area.’ “

Update: McKay is having season-ending surgery and is not expected to return in 2020.

In terms of McKay’s rookie cards, there’s no lack of signed options available, and various rare parallels are worth decent money already. It’s not like he won’t get opportunities to play as long as he’s fit, so it depends on how much faith you have in his ability to live up to the hype… were not buying in yet.