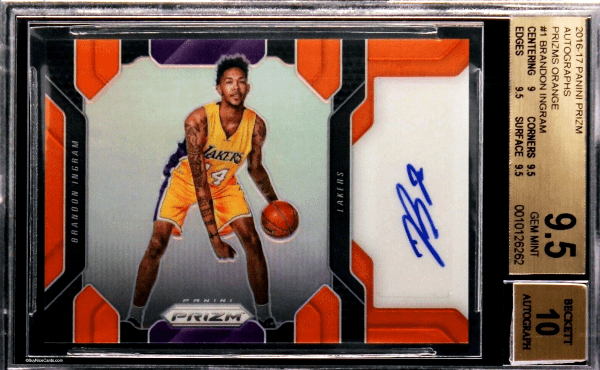 Drafted by the Los Angeles Lakers, Brandon Ingram has blossomed into a great scorer during his second stop in New Orleans with the Pelicans.

He’s got a long, lanky frame that he uses to reach around and over defenders. He played his college basketball at Duke University under the legendary Coach K.

Ingram has taken massive steps in his game every single season he’s been in the NBA. Moving forward, he has a bright future ahead of himself as he will look to lead the Pelicans on some deep playoff runs.

Ingram has made the most of the smaller New Orleans market ever since being a part of the blockbuster trade that allowed the Lakers to acquire Anthony Davis. If Ingram continues on the trajectory he’s been on the past few seasons, the Pelicans won’t be too disappointed that they had to give up AD.

Due to his high draft position, there were many different rookie cards made that picture Ingram. To make things easier for you, we’ve listed out three of the best investment options. 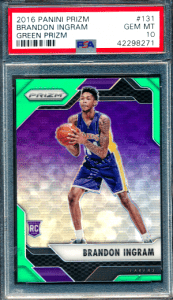 Panini Prizm might be the most popular set for NBA rookie cards and it’s a favorite among collectors. This card shows Brandon Ingram wearing the purple Lakers jersey as he clutches the ball between his hands.

While there’s no autograph or jersey patch, the strong branding of the set means that collectors will always be interested.

For those that are looking to chase the rainbow, Panini Prizm always has plenty of different parallels that offer a variety of print runs. 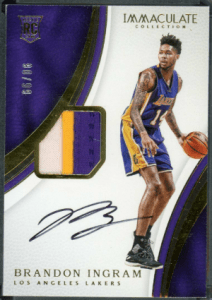 Next up is this card which has the combination of both a jersey patch as well as an autograph.

It shows a side profile of Brandon Ingram as he dribbles the ball. That image is on the right side of the card as the left is taken up by the jersey patch.

In addition to the unique features mentioned above, the card had a print run of fewer than one hundred cards which means that the quantity is low. All of these things combine to make a high-end card that will be more attractive to those with a little more upfront capital. 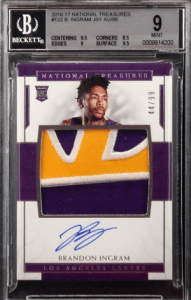 Out of all the Brandon Ingram rookie cards mentioned above, it’s this card that has the highest value. With an autograph, jersey patch, and the short print run it’s no surprise that the price is high.

Overall, a good investment option for those who have the bankroll to afford it. 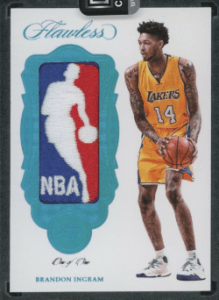 Looking to purchase a Brandon Ingram rookie card but need advice? Email us at advice@goldcardauctions.com.

Email value@goldcardauctions.com if you have a Brandon Ingram rookie card and would like an estimated value (please include a minimum of 2 photos, back and front). 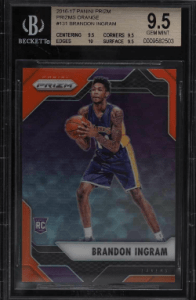 Ingram has blossomed in New Orleans and is one of the league’s best young players. Often compared to Kevin Durant, Ingram can score at all three levels and with more experience will only become a more efficient scorer.

He’s also a part of an exciting, young core in New Orleans that has the potential to be among the league’s best for years to come. If they can experience some postseason success then Ingram will have the chance to entrench himself among the very best in the NBA.

All this means that Ingram has a bright future ahead of him and if he can fulfill his potential then you will be kicking yourself for not investing.